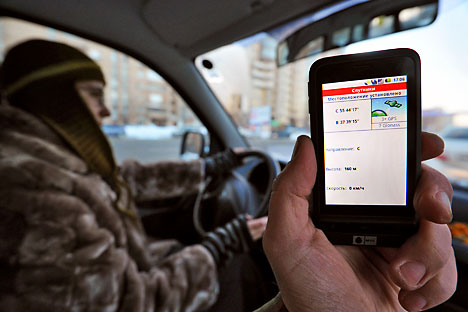 Mobile TeleSystems will begin selling its new Glonass-compatible smartphones in April, a month later than initially announced, and though it is technically less advanced than the iPhone, experts say, the new handset could easily outsell it in Russia.

The MTS Glonass 945, which AFK Sistema main owner Vladimir Yevtushenkov compared to the iPhone earlier this year, will sell for 11,000 rubles ($376) and will be the first smartphone to operate with the Russian navigation system, MTS spokeswoman Irina Osadchaya told The Moscow Times.

The new phone will be produced by ZTE, a major Chinese telecommunications equipment manufacturer, but the price for it may still be adjusted, the spokeswoman said.

When presented with the prototype of the phone late last year, Prime Minister Vladimir Putin joked that it would be good to have the phone ready by International Women's Day, so that Russian women, whom the holiday is supposed to celebrate, could find out where their husbands are.

"From the technical point of view, this smartphone is worse than the iPhone," said Vladimir Karpenko of J'Son & Partners. "The number of iPhones sold in Russia is quite small."

With the iPhone currently selling at 34,900 rubles, it constitute less than 1 percent of the market and will be easy to outsell, especially when the average cost of a cellular phone purchased by Russians is estimated at 4,100 rubles ($140) and smartphones at $320 to $330, Karpenko said.

Experts also point out that selling the new Glonass-compatible phone will require a substantial marketing effort, because the phone's main advantage is supposed to be its navigation system.

"People buy phones not for the sake of their navigation system," said Anna Lepetukhina, telecommunications analyst at Troika Dialog. "The phone is a bit too expensive if you just want to toy with the navigation system."

The Russian government has been cheerleading for Glonass and Yevtushenkov despite a carrier rocket with three Glonass-M satellites sinking in the Pacific Ocean on Dec. 5.

The government is now looking into introducing a 25 percent fee on GPS-only compatible equipment, and the Transportation Ministry has already drafted a bill to fine legal entities that own certain types of cars unequipped with Glonass up to 50,000 rubles.