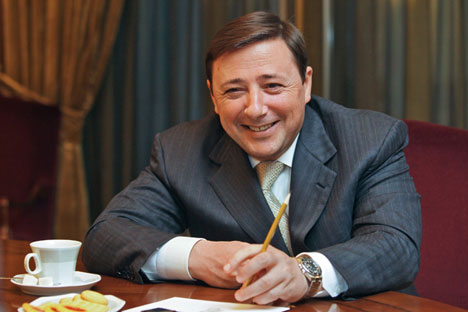 As the representative of the federal government in one of Russia's most troubled regions, Alexander Khloponin has to find ways to promote peace and prosperity among a skeptical population.

Alexander Khloponin, President Dmitry Medvedev’s envoy to the North Caucasus, has a difficult agenda, trying to attract investors and ensure the socio-economic recovery of Russia’s most terrorized regions. Khloponin plans to create jobs in the republics of Ingushetia, Chechnya and Dagestan, which have the highest unemployment rate in Russia.  Newsweek correspondent Anna Nemtsova spoke to Khloponin about Russia’s war on terror and his peace mission on behalf of Russia Beyond the Headlines.

Russia Beyond the Headlines: Do you believe that by improving the economy and quality of life you could win the war on terror in the North Caucasus?

RBTH: What is the biggest obstacle to peace in republics like Chechnya?

A.K.: The North Caucasus, unfortunately, has its own painful history. We have had two wars in Chechnya. There are many people who still see war against peaceful civil society as their life’s mission-- revenge and blood feud.

RBTH: Do you think that a part of the problem is the confrontations between Sufi and Sunni religious communities in Dagestan, Chechnya and Ingushetia? Are you looking for ways to help build a bridges between the two?

A.K.: Religious issues are too complicated; this is a road to nowhere. We should not push our republics into Islam; into the Sharia law – we are not a religious country, so there should not be any double standards here.

RBTH: What are your priorities in the North Caucasus?

A.K.: Our main priority in North Caucasus is fighting terrorism – we will continue to destroy the nests of the guerrillas, individuals and organizations financing them. Also, we will fight criminal groups financing the terrorist underground – this direction is becoming our major focus. Our third goal is obviously the fight against corruption. And our fourth priority essential for progress is creating new jobs, so people in North Caucasus can work.

RBTH: Employment in what areas?

A.K.: We have chosen four major fields for future employment: We are going to create 200,000 jobs in tourism industry, construction, agriculture and energy. At the moment, we are talking about large agricultural investment projects that will help us to take the goods from private farmers and refine them.  To support the development of our strategic fields, we are going to create logistic centers, so-called industrial parks.

RBTH: When is the deadline for your plans?

A.K.: To attract investors, the government has demonstrated an unprecedented effort and founded institutes to help the development in the region, such as Corporation to Develop North Caucasus and North Caucasus Resorts…. Investors will risk 30 percent, while the state is going to be responsible for 70 percent of investors’ risks. We plan to create 400,000 new jobs by 2025.

I know it sounds quite ambitious but we are determined to do our best and perform.