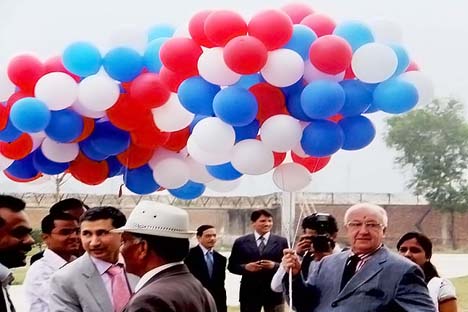 Russian helicopters make up the core of India’s helicopter fleet.

The new joint venture is designed to be a major centre for providing warranty service for Russia-made helicopters in India. It will provide after-sales services for Indian operators and state aviation organisations, along with scheduled maintenance and unscheduled repairs of Mil and Kamov helicopters. In the future, Integrated Helicopter Services Private Ltd. plans to provide major repairs, including engines and avionics, and to offer maintenance. The service centre will also have a pilot training centre and a logistic centre to provide spare parts to Indian operators of Russian rotorcraft.

“The opening of this service centre exemplifies a new stage in relations between Russia and India, which together have reached a new level of special and preferred strategic partnership,” Ambassador Kadakin stressed.

Russian Helicopters CEO Dmitry Petrov confirmed that the new centre was designed as “one of the key elements in our support network for both existing Russian-made rotorcraft and Mil and Kamov helicopters that will be delivered in the future, not just in India, but in Southeast Asia as a whole.”

Tellingly, the opening of the new centre was timed to coincide with Aero India 2011 air show held in Bangalore, South India, on 9 – 13 February.  “This service centre’s establishment, here in India, represents a new stage in implementing Russian Helicopters’ programme to build a global support network for rotorcraft based on certified centres and joint ventures offering helicopter maintenance services in different parts of the world,” said Andrey Reus, Director General of UIC Oboronprom.

This will help support Russian-made rotorcraft throughout their lifecycle, from delivery to recycling. As part of this programme, new maintenance and repair centres are being established, while the existing centres are being certified in key regions of the world, including India, which is a traditional market for Russian helicopter manufacturing.

In addition to these models that Russia traditionally supplies to India, the latter’s skies could soon see yet another certified model, the civilian all-weather coaxial rotor helicopter Ka-32A11VS. India's Directorate General of Civil Aviation (DGCA) granted permission to use the helicopter based on the certificate issued by the European Aviation Safety Agency (EASA).

Meanwhile, Russian Helicopters expects an increase in orders for new helicopters from India’s commercial operators. A number of new models, including Ka-226/Ka-226T, Ka-32A11VS and Ansat, will soon be certified and offered to Indian clients. Ка-226T is already involved in India’s tender for 197 light helicopters. A test flight of its heavily overhauled version is scheduled for September 2011.