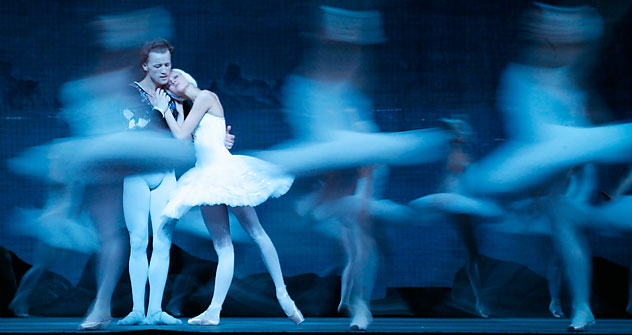 The Grand Moscow Classical ballet, which Tuesday opened the Sreyashi International Dance Festival hosted by the Raja-Radha Reddy Institute of Kuchipudi Dance in the capital, staged capsules from the famous classical ballet acts like the Pyotr Illyich Tchaikovsky's "Swan Lake", the Times of India reported.

"Indian cinema is very popular in Moscow and we love the imaginative dance choreographies in Indian movies. It is natural that the audience here will appreciate ballet," said Irina Kazaryan, head of the international department of the Grand Moscow Classical Ballet.


An undivided Soviet legacy, the Grand Moscow Classical Ballet was set up by the culture ministry of the erstwhile USSR in 1966. It is one of Russia's two state academic ballet ensembles, officially recognised by the government, the other being the Bolshoi Ballet Company founded in 1776.

The ensemble, which is touring India with seven members, is led by former Bolshoi members Natalia Kasatkina and Vladimir Vasilyov, two of Russia's leading ballet meastros. The three-day festival showcasing traditional and contemporary genres by five leading dance companies from Russia, Spain, the US, Turkey and India was inaugurated by union Culture Minister Kumari Selja. Indian Council for Cultural Relations is partnering the festival, according to The Times of India.

The highlight of the performance by the Grand Moscow Classical Ballet was the rendition of the "White Act", the second act from the ballet theatre "Swan Lake" in which the swan maidens merged with the spirit of humans in an allegorical choreography.

"The classical ballet repertory company was set up 45 years ago in 1966 by the former USSR ministry of culture. At the time of its inception, master choreographer of the Russian Ensemble, a popular repertory company, Igor Moiseyev, took over its choreography and built a repertoire of excerpts drawn from famous ballet acts and theatres," Irina Kazaryan said, recalling the history of the company.

In 1977, the reins of the ensemble were taken over by Vladimir Vasilyov, artistic director and Natalia Kasatkina, the principal choreographer. The new choreographers, former Bolshoi dancers, converted the theatre into a touring ballet repertory company.

"Currently we have 27 titles and more than 75 dancers in the company," Irina Kazaryan said.

The Moscow Classical Ballet is known for its traditional choreographies of "Swan Lake", "Black Swan", "Giselle" and "Spartacus".

"It will bring the dance companies in Moscow and other countries together to discuss new ideas, research and perform. The capital city and its neighbour, St Petersburg, have several ballet theatres, but no centre to cultivate the dance to a new level. Finance is a constraint. After the fall of the former USSR, recovery has been slow," Irina Kazaryan said. "The Russian spirit of the performances has not changed, though ballet, as a genre, has over the years become more technically complex because the dancers are young and talented and are therefore capable of more delicate body movements and wider range of emotions."

"Ballet is still as popular globally as it was when Russian ballet sensation Rudolf Nureyev danced 'Giselle' with English ballerina Margot Fonteyn in 1952," said maestro Sergei Belorybkin, dancer, actor and head of the company's ballet division, The Times of India reported.
.