In Moscow, the hunting season has opened 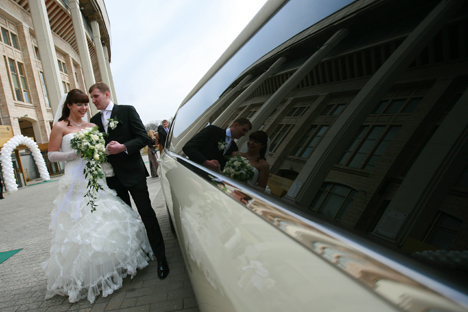 Young Russians have found a new technique for navigating the dating scene, literally. They drive around with phone numbers posted on their cars.

Hunting season has arrived…well, spouse hunting season, anyway. The “hunting” movement is becoming more and more popular in Moscow. People are using a unique method to meet a significant other by putting a “I am looking for a husband/wife” bumper sticker on the rear window of their cars along with their telephone number. You could call it a moving target.

Irina a young Muscovite, removed her little bumper sticker after just a month, after she had received 400 phone calls, a pile of text messages and numerous e-mails. And, most importantly, in this large number of phone calls and messages, Irina managed to find her man.

“I liked him when we went out on our first date, although I believe we both are very different and I thought that because this it wouldn’t work out. He was very insistent, though, and wanted us to remain friends. So, after several dates, I removed the bumper sticker,” Irina confessed on her blog, www.domovenkovaja.livejournal.com

Even though Irina doesn’t know how the relationship with this guy will go, or if she’ll have to go hunting for a new boyfriend in the near future, she says that the experience itself is what’s most important. Thanks to the experiment, Irina saw people and the world from a different perspective. The bumper sticker made her feel much more positive about life, because while she was driving around in her car she got many smiles from other drivers. Furthermore, the “hunting” had unexpected results.

“Three old friends proposed to me when they found out I was looking for a husband. I was so surprised! I met these guys a long time ago and I’d always considered them good friends,” Irina said.

The first car with a similar bumper sticker appeared in Moscow in 2007, but the “hunting” trend really took off three years ago when Valery Alekseyev put a “I am looking for a wife” bumper sticker on his car and started to chronicle his search on the Internet. Valery came up with the idea of looking for a partner that way while he was taking psychology courses in an attempt to learn how to overcome some insecurities and excessive modesty.

“The main goal of these courses is beating social anxiety, such as the fear of being made fun of. This is exactly what makes people feel nervous when they have to do public speaking. We propose different exercises, like going out with a toilet paper roll around one’s neck, begging, sitting on the metro wearing a crown, or simply asking stupid questions to other pedestrians,” said business trainer Olga Semenetz.

Valery was able not only to overcome his fears and insecurities, but also to find love. It all started when his first followers appeared in Russia and Ukraine. Sometime later, he got a call from Alina, a Russian-speaking German girl, requesting permission to use his idea. That’s how the “hunting” movement appeared in Germany. Fate, however, had other plans… and Alina found her future husband in Moscow.

That summer, Alina arrived in the Russian capital to visit a friend, and hoped to share ideas with Valery about the “marriage hunting” concept. They spent several days together, and now swear to have fallen in love at first sight.

“I removed my bumper sticker in June because I found Alina and we’re now an item,” Valery posted on his website.

Right now the relationship is still long-distance between Russia and Germany, but Valery and Alina try to see each other every weekend. At present they’re counting down the days until spring, when Alina is moving to Moscow. Their time is not being wasted, however, since they keep busy writing their love story. Meanwhile, different publishers are fighting for the publishing rights, and Hollywood studios have already presented several screenplays to the couple.

After hearing all these histories, I decided to try my luck. I drove around the streets of Moscow for two days with the appropriate bumper sticker on my rear window. First, I felt naked behind the steering wheel. Everyone looked at me, some took pictures, and a few others made fun of it, but most people smiled and wished me good luck.

As the “marriage hunting” gurus predicted, two days wasn’t long enough to find a significant other, but I felt very positive about things. Besides, I noticed that I was paying attention to other people’s bumper stickers. Who knows, perhaps my Prince Charming is looking for a wife right now.