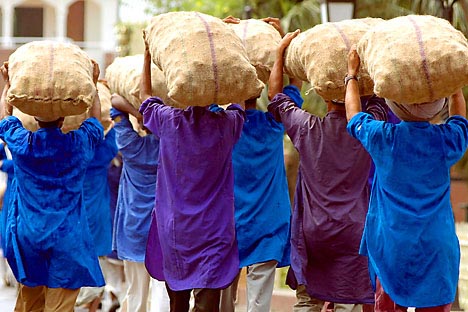 About 10 potato growers from Punjab have been approached by the Russian traders.

A handful of potato growers in Punjab are in the final stages of signing a deal with Russian traders for exporting close to 10,000 tonnes of the crop to Russia for the first time, according to reports.

''We are likely to finalise the deal within a day or two with Russian traders who have approached us for supply of potato crop to Russia,'' a potato grower from Jalandhar district, who has been approached for the supply of crop, told a news agency on condition of anonymity.

About 10 potato growers from Punjab have been approached by the Russian traders. They are reluctant to be identified and also refused to reveal the identity of the Russian traders, domain-b.com reports. ''We do not want to disclose the details (of Russian traders) with whom discussions are going on till the deal is finalised ... otherwise some other potato suppliers (from Punjab) may move in, which may jeopardise our deal,'' one of the growers explained.

Since potatoes form the base of many brands of vodka – Russia's favourite tipple as well as its best-known export – one can only wonder how much of Punjabi potato will go into Russian bellies as a food, and how much will find its way to the distilleries.