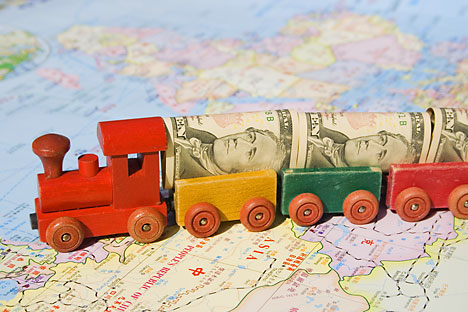 Moscow, Baku, and Tehran will combine funds for a road to the Indian Ocean.

Despite the economic sanctions against Iran, Russia and Azerbaijan don’t intend to curtail the implementation of joint projects with the country. In particular, this pertains to the railway construction within the framework of the international North-South Transport Corridor.

This project is one of the priorities of the Russian, Azeri, and Iranian railway development, and is designed to ensure the transit of goods from the Scandinavian countries to the shores of the Indian Ocean.

Talks between Russia, Azerbaijan, and Iran – which had tentatively agreed on bringing the road in the three countries into a suitable condition through joint efforts – have been ongoing for 10 years. Another trilateral meeting was recently held in Tehran. After the meeting, three documents were signed, which will be sure to accelerate the implementation of the project. Namely, the parties agreed to build a railway branch Resht (Iran) – Astara (Iran) – Astara (Azerbaijan). In order to implement this idea, it is planned to create a limited liability company for the design, construction, and operation of the railway. The charter capital of the joint enterprise will amount to $3 million. Russia, Azerbaijan an Iran are expected to invest equal shares.

According to the head of Azerbaijan Railways, Arif Askerov, from an economic stand point this project is very advantageous. It’s no accident that already 17 countries have expressed an interest in taking part in the project.

Its goal is to extend the Pan-European transport corridor Helsinki-St. Petersburg-Moscow for multi-billion-dollar transits (in railway cars, tankers, containers, freight cars) through Azerbaijan to Iran, India, and countries of the Persian Gulf.

Experts believe that the implementation of the North-South Transport Corridor promises to bring obvious benefits to not only the participating countries, but other states as well. First, the land-route from Europe to the Indian Ocean will be reduced by 800 km, which will, in the initial stage, make it possible to increase the annual volume of cargo transit in this direction by up to 5 million tons, and in the future – up to 20 million tons.

Secondly, cargo transfer via this railway will cost 10-15% less and have a 20 day advantage over the Suez Canal route.

And finally, the North-South Transport Corridor will become the new map of transport flows, which will influence geopolitics and geo-economics. For this reason, the participating countries intend to accelerate its implementation process.

Most of the construction work will be carried out in Iran. As for Azerbaijan, it needs to modernize the 500 km railway path between the Yalama station on the border with Russia and Astara (on the Iranian border), build four station tracks (1,050 meters each), customs and crossing bridges, a wheel handling station, as well as a 101-meter bridge. Implementation of the entire project was estimated at $400 million. However, given the persistent rise in prices, this number will clearly change.