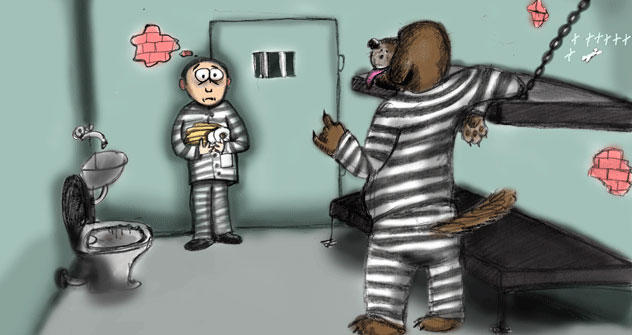 Russia may not embrace the animal control policies of most European countries, but that doesn't necessarily mean its stance is more humane.

Recently in the Swiss town of Reconvilier, the authorities euthanized a dog because its owner didn’t pay a 40-euro pet tax on time. The owner swore she had forgotten to pay the tax and that she would do so immediately. Despite that, the agents removed the poor animal from the house.

The atrocity took Switzerland by storm; angry citizens protested and even threatened to kill the mayor of Reconvilier. Swiss authorities acted based on a law that has been around for more than a century, which stipulates that pet owners must pay an annual tax of 50 Swiss francs (40 euros). Otherwise, the authorities are entitled to euthanize the pet.

Social networks have lit up with fervent debate. Is it pure savagery or a call to pet owners’ consciousness and responsibility? Most people label the act as slaughter: “We are destroying our world when we kill man’s best friend. What is left? What are we? What do we want? Where do we go? How will we end up? Being human, there is so much to think about,” said a blogger called Ranieri in a Spanish-language post on the subject. But not all the commentators agreed with him. “Yes, it is inhumane, but you don’t see any stray dogs roaming on the streets. What’s best way to go about it? I don’t know,” wrote a Russian blogger.

The controversy over animal cruelty never stops. The infamous bullfighting tradition triggers heated discussions in Spain. In fact, as of 2012, there will no longer be bullfights in Catalonia. Russia doesn’t have any bullfights to begin with, and for good measure— they were banned in 2001 after being categorized as a crime against animals.

But of course Russia has controversial matters of its own that are the source of infinite debate. Yury Kuklachov’s famous Cat Theater, founded in 1989, is constantly criticized for subjecting animals to cruelty so they can perform their tricks. Kuklachov himself has been accused, for example, of putting cats in hot frying pans so that they will jump from one to another. In 2009, publicist Mikhail Verbitski sued Kuklachov, calling him a “butcher,” among other things, and also accused him of using electric shocks to train his cats. The charges against Kuklachov were dropped, but the speculation continues.

A few months ago another scandal occurred at the Durov Animal Theater, founded almost a century ago by Vladimir Durov. Theater employees sent a telegram to the mayor of Moscow saying that the animals had tuberculosis. The Animal Control Department investigated and discovered that two monkeys suffered from the disease, but they were isolated and didn’t present any danger to the other animals.

The dog’s violent death in Switzerland has again opened up the floodgates of debate on the animals, an especially touchy subject in Russia where stray dogs continue to be an onerous problem.

Animal protection laws exist in all developed countries, and these regulations are aimed at making pet owners responsible for their animals’ lives. Perhaps some are too strict, while others may seem cruel, but they achieve their goal: It is difficult to find stray dogs on the streets in developed countries.

Russia, on the other hand, is against these kinds of regulations. In 2002 the Moscow mayor’s office decided to use more humane methods to avoid animal euthanasia and slaughter. According to the new plan, stray animals were sterilized and put back on the streets. Years later, Moscow authorities had to admit the experiment was a failure; the number of abandoned dogs continued to increase.

Today, the Russian capital has around 50,000 dirty and hungry dogs roaming the streets, living in terrible conditions, and posing a threat to the city and its residents. Every year almost 30,000 people in are injured in Moscow and between 10 and 15 people die after being attacked by stray dogs.

Homeless dogs are always near places where they can protect themselves from the cold or find some food: street markets, railway stations, food store entryways, dumpsters. In Moscow they sneak into the metro, where they can find the safest shelter.

Yet despite the lack of effort to round up stray dogs supposedly for animal welfare, Russia still has no laws protecting animal rights. In January, a demonstration took place in St. Petersburg calling for such a law, but it drew only around 40 people. In contrast, protests against animal cruelty in Spain last October drew crowds in cities across the country, including Madrid, Barcelona, Corunna and Valencia. Activists and advocates from 150 international organizations took part.

Certainly, the Swiss authorities’ methods are debatable, but without question animal protection laws are needed—for both people and animals. Abandoning thousands of dogs on the streets is not a humane solution either.

Recently in Tambov a woman was seriously injured after being attacked by a group of four dogs. Thirteen similar cases were reported in January and February. Doctors are concerned not only about physical injuries, which could be very serious, but also about the dangerous infections non-vaccinated dogs could transmit.

In 2006 the Moscow metro began a public campaign to protect stray dogs with a series of posters put up around different stations. The campaign used a photo of a stray dog and a brief line about the number of strays in the city. The project came to an end a year later when the number of dogs on the streets had already exceeded even the boldest forecasts.