On the same page of history 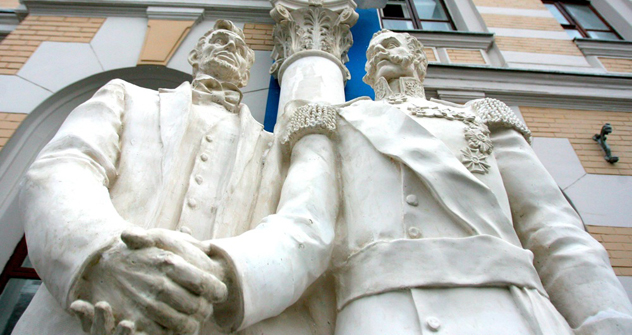 An exhibit opening today in Moscow recalls a time when Russian and American leaders shared an understanding of freedom.

The exhibit, “The Tsar and the President: Alexander II and Abraham Lincoln, Liberator and Emancipator” has made its way to Russia and opens today [February 22] at the State Archives gallery in Moscow.

President Abraham Lincoln’s private correspondence with Tsar Alexander II offers a vivid depiction of an unusual friendship during a brief but strategic period in U.S.-Russian diplomatic history. It was a time when America was in the throes of ending slavery and Alexander had just denounced serfdom.

In 1863, when the outcome of the Civil War was still uncertain, Alexander II sent fleets to New York and San Francisco, where they stayed for seven months. The support of the Russian fleet encouraged Lincoln during a brutal period of the war after England and France had considered hostile intervention on behalf of the South.

The exhibit boasts more than 200 artifacts and items from American and Russian museums and private collections; Russians will get a chance for the first time to see the personal correspondence between the president and the tsar. The exhibit also explores striking historical parallels between the two leaders.

Alexander II changed the course of Russian history by denouncing Russian serfdom in 1861, and President Lincoln transformed his country when he abolished slavery in the United States in 1863. Both men were later assassinated: Lincoln was shot and killed April 14, 1865, Alexander II was killed by a terrorist bomb on March 1, 1881.

The uniform and saber, which Alexander II wore on the day he was killed, will be on public view, as will the famous Lincoln portrait by George Healy.

James W. Symington, chairman of The American-Russian Cultural Cooperation Foundation, told Russia Beyond the Headlines that the “exhibit shows quite well what was happening when the Russian Tsar and President Lincoln found themselves on the same page of history - freeing the slaves in both countries and supporting the fragile American union in a time of peril.” RBTH caught up with Symington, who was instrumental in organizing the exhibit, before he traveled to Moscow for today’s opening.

RBTH: Why it is important to draw attention to this period of relations between the United States and Russia?

JS: It is worth remembering that great French writer Alexis de Tocqueville saw Russia and the United States as being in positions of doing great things together in the world….This is the time of course when Russia’s role in our civil war was absolutely crucial and this is not well known today. Two Russian fleets steamed into American harbors in the middle of the civil war in 1863, one in San Francisco and one in New York, and were welcomed with overwhelming enthusiasm.

RBTH: The private correspondence between Lincoln and Alexander II will be on display. What is the significance of the personal chemistry between the Czar and the President?

JS: The nature of that correspondence is very affecting. First of all, because they saw each other as heads of a family and Lincoln would congratulate the Tsar with the birth of his son and vice versa. So visitors will see some of those marvelous messages back and forth between two world leaders miles apart, but who saw the humanity in each other.

RBTH: Which items on display are of greatest interest to the public?

JS: There will be a replica of the Emancipation proclamation and also a replica of the Gettysburg Address. Originals are in the Library of Congress, but these are absolutely perfect replicas. I very much hope that Russians students in the schools and colleges will take an interest.

RBTH: What role did the U.S.-Russian bilateral presidential commission play in this exhibit?

JS: They were most helpful in terms of encouragement--because of the important relations between the Tsar Alexander II and President Abraham Lincoln--but also financially. As you may imagine it is very expensive to do such an exhibit. This commission has a lot of others things to do, but they took the time and were interested in what we’re doing and I think they feel it is in the right spirit.

Russian history us Viral in Russia