When sorry is the hardest word 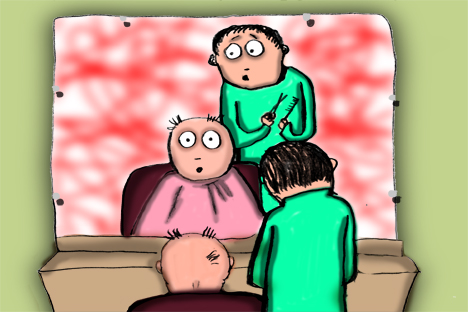 As awkward as it can be to express yourself when someone you know has suffered a loss or run into trouble of some kind, in English we have things relatively easy in comparison with Russian. The phrase “I’m so sorry” can cover everything from stepping on someone’s foot by accident in the subway to consoling your friend over a bad break-up (with alterations in intonation, of course). But in Russian, while 'Izvieniete' (Извините) or 'Proshu proschenia' (Прощу прощения) would work in the first instance, they are entirely inappropriate for expressing sympathy; it would sound oddly like you were really blaming yourself if you used either one to try and do so. So what can you say?

If the situation isn’t too serious, there are several one- or two-word exclamations available, including a number of iterations of 'bedny' (poor). Say your friend is complaining about having the flu; you could say: 'bedny', 'bedgyaga', or 'bednyazhka'. In this context, the English equivalent would be, “You poor thing!”

A couple other common phrases can cover a range of situations: 'Uzhas!'/'Kak uzhasno!' (That’s terrible/How awful!)

Sometimes you want to try and convince your conversation partner that things aren’t as bad as they seem. In this soothing category we have: 'Vsyo budet khorosho/v poryadke' (Everything’s going to be OK). Then there’s one of the ubiquitous verbs of motion, 'oboytis'. The literal meaning is motion around something, so you could think about this like walking around your troubles. In this context, I would translate 'Oboydyotsya' as “Things’ll turn out all right.”

One sentiment I find intensely irritating but people love to express is: . 'Mozhet, eto k luchshemu' (Maybe it’s for the best). If you want to be a little flippant about someone who’s complaining of physical pain, you can use the phrase: 'Do svad'by zazhivyot'. (Literally: It will heal before your wedding. Contextually: Oh, it’s not so bad.)

If things are looking more serious, you can start off any sympathetic phrase with one of several verbs in the imperative: 'ne grustite', 'ne perezhivayte', 'ne rasstraivaytes' (Don’t be sad, don’t be upset).

Find a friend crying in the bathroom (or whatever the male equivalent of that is)? 'Da ne perezhivay ty tak, vsyo budet v poryadke' (Don’t be so upset, everything’s going to be OK). 'Rasstraivatsya' functions in the same way: 'Da ne rasstraivaytes', eto proydyot' (Don’t be upset/don’t worry, this’ll pass).

One more imperative form to keep in mind is 'derzhis'. As in English, it can mean both physically and mentally hanging on. 'Derzhis, vsyo obrazuetsya! (Hang in there; everything will turn out all right).

A couple of useful first-person forms for sincere sympathy are 'sochuvstvuyu' and 'sozhaleyu'. These can be used in conversational speech, as in: 'Bedny. Sochuvstvuyu' (You poor thing. I’m sorry to hear that).

Theoretically, we could say “I sympathize” here, but that’s a lesser-used phrase in conversation, I think.

These verbs can also be used in very formal expressions of sympathy, should you have the misfortune to find yourself in such a situation: 'Iskrenne vam sochuvstvuyu' (I truly sympathize with your…).

Hopefully you won’t have to worry about this, but in ordinary speech, on hearing about someone’s death, or speaking about someone who has passed away, people can use the phrase 'Tsarstvie emu nebesnoe' (To him the kingdom of heaven). The best English equivalent would be, “May he rest in peace”.

Or if you want to add a little style to your speech, you could always go with the language of Russian fairy tales: 'Ne pechalsya dobry molodets - utro vechera mudreneye' (Do not sorrow, brave youth – the morning is wiser than the evening). OK, that last part was a literal translation. For a translation, we could probably take a page from Scarlett O’Hara: “Tomorrow is another day.”