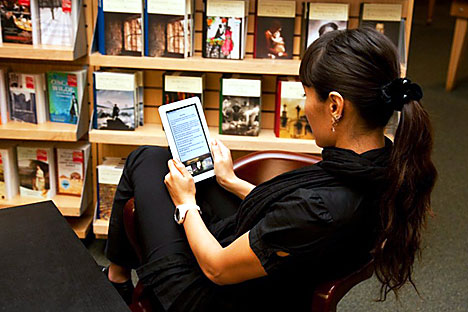 The eBook Reader market in Russia is growing at a rapid pace: Russian readers increasingly prefer a compact electronic screen to the classical folio. At the same time, the book market is shrinking quickly.

Pocketbook products are the most popular in Russia with a 40% share of the market, followed by Sony (29%), Lbook (12%) and other manufacturers.

The explosive growth in the reader market has contributed to a decline in the sales of traditional books. EKSMO, one of Russia’s largest publishing houses, reports the market for traditional books shrank almost 15% in 2009, continuing a trend seeing in previous years.

Publishers were the first to react to the drop in circulation and were quickly joined by writers.

After registering 145,000 new books three years ago, the Russian Book Chamber recorded only 59,500 new books in the first half of 2010. The decline in overall circulation totalled 17.2%.

But the readers are not the only ones to blame for the contraction in the book market, circulation and royalties.

“It’s the pirates who are killing the book business, not the eBooks,” said Vladimir Obruchev, the director of the non-fiction group at EKSMO. “It’s virtually impossible to convict people who distribute illegal eBooks because their server could be located anywhere.”

Attributor, a U.S.-based research company, said requests to download eBooks for free increased 54% in 2010. After researching the Russian market, J’son & Partners Consulting valued the market for legal eBooks at $1.95 million in 2010, however the pirate market is about five times the size of the legal market.

“It was very difficult to buy good books in the past (during Soviet times). The older generation remembers this well. But now the situation has changed. You can buy them freely, but they are pricey. The average salary of people in the regions is pretty low. Not everyone can afford to buy a good book,” said the founder and administrator of the tracking website Book.Libertorrent.com who uses the screen name Vovchenko. “We are trying to provide such people with the opportunity to read the books they would like at the very least electronically.”

Shinkarenko said the tools are in place, but the law is not enforced particularly well in practice due to a number of factors unrelated to legislature. “As a rule, the copyright holders do not take a very active stance in the battle against piracy. At best, they limit themselves to monitoring networks so they can identify plagiarism and then send hand-written letters of claim. There have been very few instances of courts protecting rights. This is the result of slow court proceedings, legal costs and the fact that only small amounts of money are generally awarded, although recently we have managed to convince judges that compensation for such crimes should be quite high. We had one case with the smart-book (shortened versions of books) business which was resolved before it went to court; we managed to reach an agreement with the pirates on the legalisation of their activities,” he said.

Another key factor behind the decline in sales on the Russian book market is that people have simply stopped reading print, Vladimir Obruchev claims. Printed materials have not only been replaced with eBooks but with the Internet in general because of its easy access and the fact that it costs much less than printed materials.

This view is also supported by the founders of LiveLib, the largest Russian-language social network for readers. “This isn’t the first time that a book has changed its form,” said Yelizaveta Ponomaryova, the social network’s PR director. “It wasn’t long ago that our forum users were complaining and saying that a screen could never replace the rustling of the paper pages. But electronic versions have become more accessible and the screens have become more comfortable to read. And now the forum users are asking each other: what do you think is the best reader to buy? What electronic libraries do you use? We believe the replacement of paper books is inevitable. Of course, some will still remain with booklovers, conservatives, fans of exclusivity and those who don’t have access to the proper equipment for one reason or another.”