Gorbachev: Abroad and at home 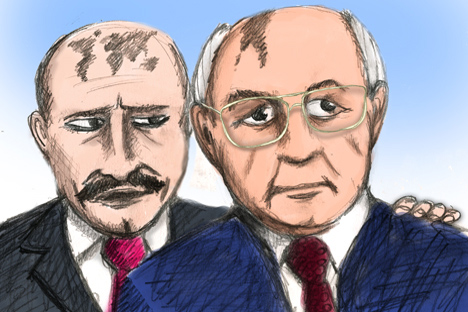 Twenty years after the fall of the Soviet Union, Gorbachev's role in creating modern Russia is still misunderstood.

It has become commonplace to claim that Mikhail Gorbachev is highly regarded throughout the world but is still not appreciated in Russia. When people ask him what he thinks about this, he says that he feels no resentment and, moreover, can understand people, since the transition to democracy has been a difficult experience for millions of Russians. Gorbachev also does not deny his share of responsibility in the whole process and acknowledges the mistakes and failures of the perestroika period.

Having known Gorbachev for many years now, I do not doubt his sincerity. For him, suggesting that “the leader was unlucky with the people” is organically unacceptable. The reasons, however, for the gap in how Gorbachev is perceived in the country and the rest of the world cannot be explained without taking into account certain aspects of the Russian national character and the country’s history.

When Gorbachev came to power, everybody wanted change. But the overwhelming majority of people were not quite sure what kind of change they wanted. The Russian people’s traditional hopes for “a kind master” and “a good tsar” prevailed at the time. Virtually any decisive or drastic actions taken by the country’s new leadership would appear to the people as the beginning of change.

It is not true that Gorbachev “did not have a choice.” A kind of “shadow ideology,” which combined elements of Russian nationalism with imperial geopolitics, had become popular among the party leaders at the time. An even more obvious option would have been to “strengthen discipline” and “put the house in order,” which would have gradually led to the Soviet regime morphing into a Ceaușescu-like one.

The choice that Gorbachev made – and for which he received approval from the conservative Politburo – was far from the most obvious option. He wanted perestroika, initiated from above, to receive support from below-- not as a routine, universal nod of approval but by empowering millions of people. He initially tried to implement this plan within the existing system, but two or three years later came to the idea of democratization. He was able to push this through a new Politburo but one, as it soon turned out, that was still unprepared for the painful changes, surprises and instability that are inevitable when real reforms begin.

The majority of people were also not prepared for what was in store. Having been granted more and more freedom, the people continued to rely not so much on themselves as on a miracle, a “strong hand” and a “decisive leader,” which explains Boris Yeltsin’s rise in popularity. This is the main reason why Gorbachev continues to be misunderstood to this very day.

It is ironic that the first to “run away from Gorbachev,”  joining the nationalists in the in non-Russian republics and flocking to Yeltsin in Russia, were the people who made up the most active and educated part of society. The intelligentsia, which benefited most of all and fastest of all from the freedoms they received from above, took advantage of this freedom in order to organize a grandiose “celebration of disobedience.”

In the heat of this celebration, the new leaders found it easy to prematurely split up the Soviet Union, even though no institutions of democratic policy, civil society or market economy had yet been formed in any of the republics. Twenty years later, it is clear that this premature dissolution of the union did not accelerate but actually slowed down the formation of such institutions and led to the emergence of regimes that wield uncontested power and only imitate democracy. Few people are willing to admit this, however. For the people of many former Soviet republics, the hardships of the previous two decades have been offset by feelings of national pride resulting from their newly found independence. This, however, is not the case in Russia, for it is the only former Soviet republic where, according to polls, most people view the disintegration of the union as the loss of a great country that was theirs.

In searching for somebody to blame, all kinds of different people-- Communists who voted in the Supreme Soviet to support the accords ending the union; radicals who supported everything that weakened the central government; and ordinary citizens who did not even blink when they learned their country had ceased to exist – point the finger at Gorbachev. Some criticize him for not using his power to suppress separatism, others claim that the Soviet Union could have been preserved if Gorbachev had transferred power to Yeltsin following the attempted coup in August 1991 (I heard this from one of Yeltsin’s former associates), while still others are just blindly hostile toward him.

At the same time, people are now using the rights and freedoms they acquired during the perestroika years. The freedom to engage in private business, practice religion, travel abroad, and, to the degree allowed by the authorities, speak out and assemble is now viewed as a given for which nobody needs to be thanked. Rather, one hears criticism: In the words of Alexander Solzhenitsyn, “Gorbachev’s glasnost ruined everything.”

Solzhenitsyn was not alone in failing to notice the contradictions between the impatient demands of the early 1990s and the blame Gorbachev received after leaving power. Even Gorbachev’s stepping down, which saved the country from even more severe upheaval, is not appreciated by the people and the “elite” for whom the leading roles in Russian history were played not by Alexander II, the tsar who freed the peasants, but rather by Ivan the Terrible, Peter the Great and Joseph Stalin.

Saying this does not mean "blaming the people." History has made us what we are. Mentality and national character change much more slowly than material culture. But we cannot even address the problem if we do not recognize it. The disparity in how Gorbachev is perceived in Russia and in most other countries is undoubtedly a problem--not Gorbachev’s problem but Russia’s. Closing the gap with the rest of the world in the assessment of this man’s role in history would be a huge step in Russia’s integration with the global community.

But it cannot happen by itself. For it to happen, Russia needs another attempt at building a real democracy. Success is not guaranteed. The leader who takes this step will have a difficult time, but his task will be much easier than the one faced by Gorbachev, who initiated these reforms in a unique country that none of us really understood. Today, we are not quite as unique and that is likely a good thing. We are searching for the path to democracy along with dozens of other countries and hundreds of millions of people. And having traveled this path, we will be able to properly appreciate the person who gave us this chance.