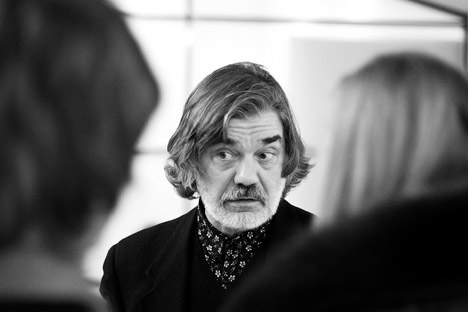 My mobile phone has barely stopped ringing over the past few days; my colleagues, friends and former students have all been calling and asking the same question:

“Have you already seen the results from the World Press Photo Contest on the Internet? What’s happening to global journalism? You’ve been on the jury three times; surely you have some understanding. Can you explain this?”

So, in response, I logged on to the contest website and took a look at the winning works that were selected by the jury last week. Subsequently, I talked to a number of teachers, experienced colleagues, former contest participants and multiple winners of the contest.

The answer to the question is simple and succinct: International photojournalism is seriously ill, suffering from an acute cerebrovascular disease complicated by cardiac failure – a common diagnosis for the many mortals who suffered significant physical and psychological stress as a result of the past year’s natural disasters, revolutions, ethnic conflicts, terrorist acts, government provocations and social and domestic tensions.

Photographers are no exception; hundreds plunged head first into an abyss of horror and catastrophes. Obviously, a photographer working in the extreme conditions created by natural disasters, ethnic or religious violence experiences a high level of stress.

Judging by the contest results, not only have experienced photographers with established mindset and attitudes willingly entered this hellish environment, but also newly minted and no-nonsense adventurers armed with nerves of steel, quick legs and access to the Internet. Many of these adventurers appear to have no training in photography at all. Having grasped the basics of auto-focus, they rush to portray human suffering, attempting to find a niche in the hierarch of international journalism. They have little knowledge of classical literary language or classical visual art. Nor do they have an understanding of the humanistic basis of human consciousness, or the notions of image, symbol, metaphor, or philosophical thinking. Their camera lenses are like the cold and indifferent scalpel of an inexperienced surgeon cutting into the still-warm flesh of human grief and suffering.

Apparently, the intoxicating atmosphere of the autopsy room has paralyzed the jury’s senses, rendering the judges incapable of making unbiased decisions. Blind and indifferent documentation has become the new fashion in journalistic photography, with distorted pictorial forms providing basic stylistic guidelines. The point is to shock the viewer, brushing aside the humanistic nature of classical photography.

The photo of the year is the portrait of a young Afghan woman disfigured by her own husband, an image that has become a symbol of violence and sadism. In terms of visual style, it is closer to a forensic photograph. I wonder whether the photographer asked the unfortunate victim if she was happy about the large-scale distribution of her disfigured image. Afghanistan is far from Amsterdam, but this woman is a human being and a citizen of our planet. We all have to bear our share of moral and ethical responsibility for society and our fellow man.

Summing up the contest results, the World Press Photo publishes a gorgeous catalogue of winning photos, with the photo of the year on the front cover. If it were up to me, instead of this photo I would have chosen Kazimir Malevich’s Black Square – a masterpiece of 20th century pictorial minimalism – not as a piece of art, but as a manifestation of the spirit and our time, symbolizing the degradation of the humanistic basis of modern photojournalism.

In some cases, I welcome hard-hitting social photography – you can see this in many of my works – but there is a limit to everything, especially when showing people at the height of suffering.

Many photographs in the winners’catalogue don’t merit serious discussion. The unifying theme is the monotony of photographic forms, most of which are in a style of unconscious naivety and primitivism, series without beginning or end, lacking any generalization and categorizing but with a focus on exotic images from distant third world countries untouched by 21st century civilisation. Many of the photographs look like average student studies and experiments, particularly in the portrait category and the sports series, which verge more on depicting criminal scenes rather than the beauty and intensity of competitive sport. Classic culture and art have been replaced by tawdry mystifications, exotic rites and vacation photos.

There were, however, some good images in the nature and environment category—with the exception of the oil spill series in sharp close-upthat resembles a selection of wallpaper samples for Christmas decoration. Here the unthinking, mechanical recording of the moment has been raised to the level of contemporary photographic culture.

I really liked the Whooper Swan picture in the nature category, which was shot for National Geographic magazine. It was exquisite in style and form, full of humanism and love. I also liked the two social projects, The Julie Project 1993-2010, by Darcy Padilla (the United States) and the Name of Victoria by Mads Nissen (Denmark). This is real journalism with a meaningful topic, addressing people and their problems and woes.

Every summer, I visit the annual World Press Photo exhibition in Moscow, taking my kids, my friends and acquaintances, my students, and children from orphanages, to show them pictures of war and peace, human joy and suffering. This year, I will think twice about going at all.

Vladimir Vyatkin is a renowned photographer and winner of international photo exhibitions and contests. He has received more than 160 awards. His works have received multiple awards at the World Press Photo competition in Holland, Mother Jones in the U.S., the Great Wall competition in China, and sport competitions in Switzerland, France and Japan. In 2003, he won Saddam Hussein’s Gold Prize (Iraq), and in 2003-2004 he received the Silver Camera award in Moscow.