Inside the Kremlin kitchen 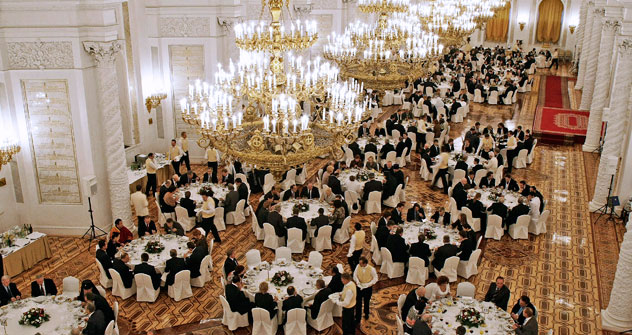 Viktor Belyaev, former Kremlin chef, talks about the culinary tastes of Margaret Thatcher and Richard Nixon, as well as changes to the Kremlin table introduced by Vladimir Putin.

In March, Yekaterinburg will host the first Russian Culinary Congress, which will adopt a strategy for preserving the iconic recipes and long-standing traditions of Russian. The congress is organized by the Russian Interregional Culinary Association, headed by former Kremlin chef ViktorBelyaev. Belyaev worked for a total of 30 years in the Kremlin, cooking for leaders and high-profile politicians from various countries, and he knows one thing for sure: A chef’s level of responsibility does not change depending on who is eating the food. Itogi’s Vitaly Dyachkov sat down with Belyaev to talk about his experience and how official cuisine has changed over the years.

Vitaly Dyachkov: How did you begin to work at the Kremlin?

Viktor Belyaev: At school, I was interested in history and planned to study the subject in college, but, on my grandfather’s insistent advice, I ended up going to cooking school. I graduated with honors and was assigned to work at the Praga, then Moscow’s best restaurant. At that time, the best restaurants provided their chefs, waiters, and maitre d's to the Kremlin to work at official state receptions. That was how, in 1975, I happened to be working there during a reception celebrating the 30th anniversary of the end of the Great Patriotic War. I remember walking through the Kremlin’s Trinity Gate, my legs feeling like jelly. We were taking in the dishes for the reception when suddenly the entire Politburo, headed by [Leonid] Brezhnev, came into the room. I was absolutely paralyzed with fear.

In time, I was noticed and I left the Praga restaurant to work as a chef in the special kitchen, cooking for Kremlin officials and the Council of Ministers of the Soviet Union.

V.D.: Was it difficult working there?

V.B.: I cooked for Indira Gandhi, Erich Hoenecker, Helmut Kohl, and Valéry Giscard d'Estaing. Once, I even managed to please Margaret Thatcher with my cooking. Usually, the chefs at the embassy cooked for her, but during one of her visits, she came to our dining room after the rest of the delegation had finished their breakfast. We served her a cup of tea, some toast, jam and juice. Suddenly, someone said to her: “The blinis are excellent today – the most delicious palachinkas.” That piqued her interest: “What are palachinkas?” she asked, and I had none left. So I had to make half a dozen for her quickly, with cottage cheese. She ate all six of them. The next two days she came down to breakfast and I had palachinkas ready and waiting for her. She came into the kitchen to thank me – she took off her glove and shook my hand.

All visits by world leaders were, of course, major events. Before the arrival of every foreign delegation, especially one from a capitalist country, there was a special briefing held by a KGB officer who explained things like: “No conversations, no packages, no requests. You are here to give them food and drink and then clean up.” We called the door to the dining room “the Soviet border,” and only the waiters and maitre d's were allowed to cross it. It was from them that we learned what was happening at the table.

It was the maitre d’ who told me about U.S. President Richard Nixon’s reaction to my cooking. It was sometime in the mid-1980s. Nixon was in Moscow as an intermediary at the talks between [Mikhail] Gorbachev and [Ronald] Reagan on nuclear disarmament. I was very worried, trying to think up something special to cook for him. I decided to serve veal braised in milk as the main course. Nixon’s flight was delayed for about four hours by bad weather and I feared the dinner would be ruined. But Nixon eventually arrived and came to the dining room. About 40 minutes later, in came the maitre d’: “You know what – he has not yet started his dinner. We served him a glass of Bordeaux, but he is too busy walking around with his secretary, taking pictures and saying ‘Admirable! Admirable!’ in French.” And I could understand his feelings. There were 15 different starters alone at that dinner. All the food was served on special tableware decorated with the Soviet coat of arms, which had to always remain visible and not be covered with food. It was decorated with lemon and greenery, and the food was placed on the dish next to it – the food itself had to be decorated too. You could not simply put the cooked fish on to a platter – you had to create flower petals out of a lemon, a decorative border out of a cucumber, a rose out of a tomato, and all kinds of other buttercups and bluebells. And no decorative garnish could be the same on any of the fish and meat hors d'oeuvres. There was a special quality control specialist to check that.

At last, Nixon sat down to eat his dinner; he ate with gusto, trying not to destroy the intricate patterns of the food served on the plates. The waiter was serving his tea when I was getting ready to go home. It was after midnight when I came downstairs, where the duty vehicle was waiting to take me home. The drivers were always hungry, so I came back upstairs to get a couple of sandwiches for them. When I entered the kitchen, Nixon was there and greeted me with: “Are you the chef?” in heavily accented Russian. He shook my hand, gave me a hug and said: “Excellent, Viktor! Simply excellent!” I was so elated when I arrived home; I said to my wife: “Can you imagine – the president of the United States himself shook my hand.”

I asked Nixon for a picture of the two of us taken as a keepsake. He wrote on that photo: “To Viktor Belyaev, a truly great chef, with gratitude from Richard Nixon.” He also presented me with a photo of himself with his daughter.

V.D.: Is it more difficult to surprise guests at official state receptions now than, say, 20 years ago?

V.B.: It certainly is! [Vladimir] Putin and [Dmitry] Medvedev are both young men that have traveled the world. The receptions are attended by people that have been to different countries and tried various dishes from different cuisines. Consequently, since 2000, the receptions themselves have changed significantly. Previously, we had these endlessly long tables. Putin’s protocol service decided to change everything. The first thing to go was the immense list of all the dishes to be served.

In Soviet times, there were six to eight pounds of food served per person! Can you eat all that during a two-hour meal? That was a real waste, of course. But we had to serve all the “iconic” dishes – whole sturgeons and roasted piglets. That was supposed to demonstrate the scale of things: This is the great Russia for you – piles of pies and spoonfuls of caviar! Do you know what we, quite literally, worked our fingers to the bone doing in Soviet times? Serving caviar was a real ritual. We had to cut forms to resemble the Kremlin walls out of ice. We first filled saucepans with water, waited for it to freeze and then used a heating torch to cut it. Now there are special electric knives, but then we had to use an ordinary knife to do it. When the ice mold was ready, it was immersed in beet broth to give it the right color. And then we placed a silver serving dish inside the ice figure and, on top of that, a glass serving dish with caviar. That was how caviar was served. It was a thing of beauty!

There were special molds for sturgeon too – to show the whole fish in all its splendor, decorated with mayonnaise, cranberries, and greenery. We built veritable monuments for fish dishes: a clear container was filled with water, like a fish bowl, in which tiny fish were swimming. And it had special lighting to it. Can you imagine the sight? The chandeliers shining luminously lights, the national anthem of the Soviet Union being played, the guests entering the hall and see a table laden with food – roast piglets, sturgeon, caviar! Fruit was served in ruby-colored vases. There were sometimes as many as 200 such vases adorning the table. They formed a straight line on the table to add to the beautiful symmetry.

But all that splendor came to an end in Gorbachev’s time. The expensive tableware somehow disappeared; the food was no longer as exquisite or plentiful. When Boris Yeltsin was in power, there were attempts to restore the old traditions; Pavel Pavlovich Borodin brought some things. But in Putin’s time, the traditional Russian table became a thing of the past. They replaced the old tables with round ones, which was great, and added chair covers, which completely transformed the reception hall. Then came changes to the menu. First of all, the number of hors d'oeuvres was reduced to a minimum. Only tiny pies and fruit were served as starters. Huge vases with big oranges, apples and grapes were replaced with small vases with raspberries, blueberries, and blackberries. The dishes were now served according to the European traditional standard – not everything at once, but one dish after another: cold hors d'oeuvres, hot starters, the main course, and dessert. It also seemed that there was less of an imperial scale to things and less traditional Russian cuisine, but sometime in 2003 during a meeting held while we were preparing for an important upcoming reception, I heard: “Vladimir Vladimirovich suggested that some traditional Russian dishes be included on the menu. Let’s not forget Russian cuisine. We will serve the dressed herring salad and some aspic.” That is easier said than done; how can we serve them in a grand enough style at an official reception? But we found a way. The dressed herring salad is now served in portions on small dessert saucers, and aspic is prepared in tiny glass molds.

V.D.: Do you share your experience with the younger generation?

V.B.: Of course I do! I give lectures at Plekhanov Russian Economic University; I try to explain to the students that they should not forget the national cuisine while they are learning the many secrets of the art of cooking. I am head of the Russian Culinary Association and we declared 2010 the year of Russian cuisine to remind people that we should eat more traditional Russian food. But it is useless to promote Russian cuisine in big cities. Fast food runs the show. And it galls me to see it, not so much because it is a blow to the entire profession, but because it is degrading to the entire catering industry. This industry is dying. For some reason, it has been forgotten that there are different types of food and catering service: for children, preschoolers, schoolchildren, students, soldiers, sportsmen, hospital patients. But it seems few people think about such things nowadays. But we do think about it.

This article is abridged from a longer version published in Itogi.