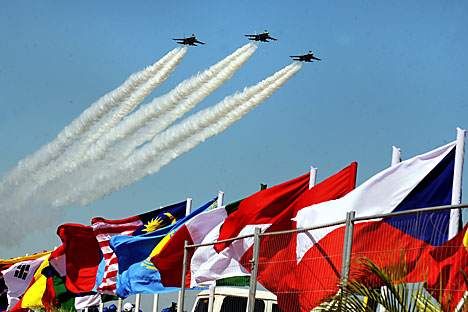 The air show and demonstration of Indian pilots’ prowess at the Aero India 2011 held in Bangalore in February highlighted Russian aircrafts’ role in India. More than half of the planes that took part had been developed and built in Russia or in India under a Russian license.

India sees cooperation with Russia as a high priority. The Russian multipurpose SU-30 MKI fighter jet is known as “India’s pride”. Hindustan Aeronautics Limited’s management considers the building of these planes under a license, along with the development and building of their own LCA fighter plane, to be its most successful project. The implementation continues of a massive project (270 planes worth $12 billion) which is the most successful military technical deal between Russia and India: SU-30 MKI (customized) continue to be delivered regularly. According to the head of the United Aircraft Building Corporation and the head of the companies MIG and Sukhoi Mikhail Pogosyan, the Indian market can absorb at least 200 more SU-30 MKI planes.

“We constantly modernise the planes,” stresses Mr Pogosyan. Our modernisation priorities are avionics, radar and other systems, and increasing the plane’s capacity to strike ground and air targets. The most massive modernisation of onboard weaponry is in adjusting the BrahMos missile to be used by these planes.

Another successful project is the programme for creating a family of BrahMos supersonic missiles (so named after two great rivers, the Brahmaputra and Moskva). By now IAF missiles of the “ship to ship”, “ship to shore”, “shore to ship” and “surface to surface” class have been tested and put into service. The first to be adopted was the Block I version of BrahMos, which is an anti-ship missile that can also be effective against onshore radio-contrast targets. Then, at the request of the Indian strategic weapons command, the Block II variant was developed which features an improved control system, self-targeting warhead and software, a receiver of satellite navigation system signals and can neutralize both radio-contrast and ordinary ground targets.

Work on the basic versions of BrahMos was largely completed in 2009 and 2010 and they are already in use by the Indian Navy and Strategic Forces. Further work involves improving the missile and building air and submarine-launched missiles. Experts at BrahMos Aero Space Limited have created an updated modification, Block III, which can strike targets while swooping down vertically. The missile is meant for rugged terrains, for example, when the target is hidden behind a mountain or mountain range.

“The BrahMos Block II cruise missile can be used against any types of targets and by any carrier,” says the head of BrahMos Aero Space Limited, Dr Shivathanu Pillei. “In the near term we will concentrate on developing an air-launched missile working closely with the Russia’s  Sukhoi to adapt the fighter jet to using our missile. We expect that another conference with the interested parties will take place soon, although we are planning pop-up tests for 2012 and firing tests by the end of the year.”

Indian experts engaged in building up the Indian Air Force today focus on a tender for 126 multi-role combat aircraft (MMRCA) worth at least $10 billion. The previous Aero India exhibition witnessed what amounted to a latent competition during the course of a demonstration programme involving the Russian MIG-35, the American F-16 and F-18 Super Hornet, the French Rafale, the European Eurofighter and the Swedish Gripen. This time around, however, the MIG-35 was absent, causing raised eyebrows and even disappointment among local experts. There has even been speculation that “the Russians have dropped out of the race for a prestigious piece of the pie”.

The Russian side, however, does not dramatise the situation. “Under the terms of the MRCA tender, we are to demonstrate the potential of our MIG-35 not at the Bangalore exhibition, but during the course of extensive tests carried out by Russian and Indian airmen in India and Russia, said Pogosyan. We believe that we have fulfilled the programme of demonstrating our plane and we want to allow the customer to make a decision in a calm atmosphere on the basis of the materials available from the assessment of other projects.”

The Indian Defense Minister A.K. Antony told a press conference in Bangalore that the choice of aircraft after the tender will be made “for the good of the country” and not on the basis of preference for any country or pressure from any bidder. The final decision, the Minister said, will probably be made in the next fiscal year and prior to submitting documents to the Indian Government they will be studied by a technical commission set up to agree upon the price parameters.

“We describe our relations with India in military-technical cooperation as a strategic partnership, Alexander Fomin, first deputy director of the Federal Service for Military-Technical Cooperation, said in an interview. We are moving increasingly from the “seller-buyer” type of relations to cooperation in high technology, one outstanding recent example being the joint programme with India to build a fifth-generation fighter plane.”

It is indeed an ambitious programme and, as HAL Corporation managers said at a press conference, it would require about $6 billion for research and development alone. The bulk of the work will be carried out by a joint working group in 2011 and the result will be submitted to the customer, the Indian Air Force, in the first half of 2012.

“The concept built into the fifth generation fighter plane takes into account the stiff competition among existing and future projects in that class of planes, says Mr Pogosyan. Therefore even the appearance of a Chinese fifth-generation fighter will not affect our plans: our programme in its present shape makes us very competitive in the world aircraft market.”

In its relations with Delhi in the military technical sphere that date back to 1964, Moscow has now passed on to transferring the latest achievements to its Indian partners. “Today we are moving to an entirely different level – cooperation in the development of the latest-generation weapons and military technology, Deputy General Director of Rosoboronexport, Viktor Komardin, stresses. We have launched some important programmes in military-technical cooperation that will make a difference to the military might of our countries.”

There are examples already of a totally different level, i.e. cooperation in the Indian market among apparent rivals: on commission of the Indian Air Force the Russian Il-76 has been used to develop a new AWACS plane, A-50EI whose radio electronics have been largely supplied by Israel. “It has been a successful experiment and we are contemplating carrying on that project,” said the head of the Russian delegation to the Aero India 2011 show, Alexander Fomin. “We have reached a new, technological level in our relations with India, which, strangely enough, benefits both parties. There can be no other approach if we do not want this niche to be occupied by other countries. The fact of the matter is that we face stiff competition and India is a country where it is at its stiffest. Our competitors are very big and powerful and if we get off to a late start, our competitors may leave us in the dust. This is the harsh reality of our life.”