Egyptian revolution through the eyes of an India scholar 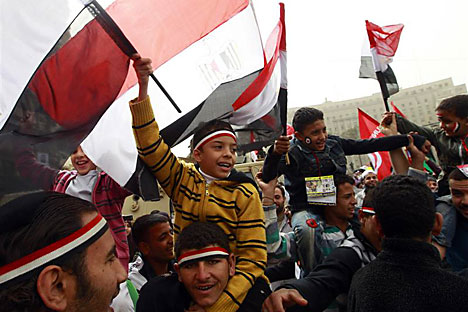 The drama playing out in Egypt is described in various ways: a revolt, a youth protest against the “last pharaoh” Hosni Mubarak and institutions that have outlived their age and even a “popular uprising”. Even the smartest journalists, however, fail to answer the most important issue: the social nature of the current political crises in the Arab world.

What message are the events in Egypt sending to the world? Egypt is not only the leader of the Arab world, but also a country where the domestic state of affairs proves crucial for the new polycentric world. Is it an extreme expression of the grassroots discontent of the people with corruption, lack of political opportunities and lack of a viable future for young people? Or do we see a transformation of a traditional popular revolt into more complicated, “advanced” forms of social organisation?

Soviet historians usually distinguish political revolutions (those that drastically change the character of a political system) and social ones that signal fundamental changes in the entire system of social relations (in other words, a paradigm shift in social development). Social theory would have it that both Egypt and Tunisia are examples of incomplete political revolutions. So deep has their impact been on the entire Arab world that even the tangential Yemen, the relatively prosperous Bahrain and the apparently invincible Libya (which followed “a third way”) are now in turmoil.

The interim results of the “Egyptian catharsis” can (and must) be formulated by elections free of any administrative (or any other) pressure.

The political processes in Egypt highlight the problem of civil society in the Arab world. Russian Arab scholars believe that there are signs of civil consciousness emerging in the region and that these societies can no longer be described in terms of the traditional concepts of the “traditional/stationary society”. The idea that gained acceptance in the West since the mid-1990s is that there is a special type of civil society in the East, including Arab countries. Russian philosopher Yuri Krasin thus describes the “civil” problem of transition societies: “One view is that civil society is an exclusively European phenomenon… the Czech-born English ethnologist Ernest Gellner believed that other civilizations have alternatives to the civil society in the shape of Sharia law, tribes and clans. This is most probably a delusion. But it reflects the real problem of the specific ways societies manifest their energy in various civilizations. That is true not only of the process of civil society and democracy emerging, but of the outcomes of that process.”

The social upheaval in Egypt became possible due to several factors acting at once: a dramatic deterioration in the standards of living after soaring growth in food prices, cynical vote-rigging during parliamentary elections (November 2010), blocking upward social mobility for Egyptian youth (between 20% and 40% are unemployed, including people with a higher education), which was an inevitable consequence of the model of economic development adopted by the ruling circles. It is true that by no means the entire city of Cairo came out against “the last pharaoh”, but others may counter by saying that there was a need for it: 7–8% of the active (politically engaged) population can set an example and lead the passive and the vacillating, as the experience of the 1789 French Revolution has shown. This historical agent is the potential “locomotive” of democratic change in Egypt.

The future of the largest Arab world country hinges on how open Egyptian society is to both technical and social political innovation. In my opinion the composite character of the present-day Egyptian society holds a promise of a positive reaction to external impulses for development. The complex symbiosis of the ancient Egyptian civilization, Islam, the Western experience of French influence and British protectorate deprives modern Egyptian society of “Islamic homogeneity” and makes it open to the influence from other civilizations, including the ideas of democracy. It is not fortuitous that Mubarak has for many years been described as “the last pharaoh”. Egypt is a large society of 85m people. In such large societies there is great inertia of social processes because of their sheer size, which makes the evolutionary trajectory of transformations in the country preferable both for the people and for the authorities.

The international impact of the Egyptian revolution is comparable not so much with the Islamic revolution in Iran (1978–1979) as with India gaining independence in 1947. The Indian press in its coverage of the political process in Egypt has for a reason mainly carried articles of a general assessment, because the Indians know about the events from electronic media. The events in Egypt in late January-early February reminded me of the three-act development of the national movement in India that followed the “pressure-compromise” scheme.

All the main political forces were taking part in the revolutionary events, which thereby became amenable to the social logic of the Egyptian revolution. The Islamist organisations, and especially their political actions merit special attention. Looking at the current activities of the Muslim Brotherhood and similar groups, we have to admit that the revolutionary events followed a “laboratory” scenario, with opposition leaders and political experts urging the Muslim Brotherhood to transform their movement into a full-fledged party that follows the rules of the game accepted in parliamentary democracies. For their part the Muslim Brotherhood stressed the creative functions of Islam, which prevents the atomization of society and strengthens the bonds of social solidarity, especially among the grassroots.

The new authorities seemed to be ready to integrate Islamists into the country’s political system. The moderate Islamist party Al-Wasat Al-Jadid (“the New Centre”) has already been registered. Society expects from Islamists a concrete programme for social and economic change in their country.

Finally, there is unlikely to be a fundamental change in Egypt’s foreign policy orientation. On the one hand, various groups in society are now much more confident, which promises greater independence in international politics. The readiness of the United States and its allies to accept a “non-liberal democracy” as a viable form of social organisation in Egypt indirectly shows that the West is ready to take the country for what it is going to become. On the other hand, Egypt hardly needs to change its foreign policy in any substantial way. Meanwhile, a change of nuances and accents in foreign policy will be readily accepted by other countries.

The experience of a political revolution in Egypt shows that the authorities must develop and improve democratic institutions. Inaction is fraught with political upheavals and unpredictable consequences.

Andrei Volodin is Senior Research Fellow with the Russian Academy of Sciences’ (RAS) Institute of World Economy and International Relations, Head of the Oriental Studies Centre, Diplomatic Academy under the Russian Foreign Ministry.