In the Arab crisis, Iran is winning 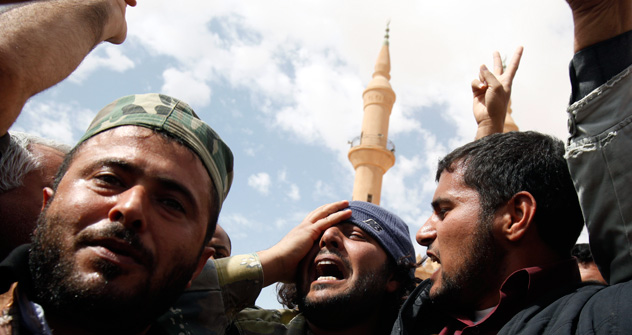 The Arab crisis affects the majority of the leading states. But, experts interviewed by the daily news publication Trud have come to the conclusion that the United States, Israel, and Russia will suffer most from the destabilization of the situation in the Middle East, while Iran, Turkey and Syria will have everything to gain.

The Crisis in the Middle East is entering a new stage: yesterday, it was revealed that Egypt’s ex-President, Hosni Mubarak, was summoned to Cairo for questioning on corruption charges. Meanwhile, the Libyan Air Force has conducted a bombing campaign on the city of Brega. Experts say that it is already clear who is enjoying the fruits of the Arab revolutions, and who will suffer the losses.

Most of the experts who were interviewed by Trud made their conclusions based on the assumption that after the crisis the Arab world will end up under the rule of the henchmen of radical political Islam, such as the Muslim Brotherhood.

“In Egypt, Tunisia, Algeria, Yemen, and Libya the same thing will happen that happened with Palestinian Autonomy in 2006, when it wasn’t the moderate Fatah party that won in the democratic election, but the extreme Hamas movement,” says Yevgeny Satanovsky, president of the Institute of Middle East Studies.

All the analysts have no doubt that the greatest losses will be endured by the US, which used to have absolute control over the Middle East – political, economic, military. Its strategic partners among the Arab states were Egypt and Saudi Arabia.

“In the eyes of the Egyptian revolutionaries, Mubarak was America’s puppet, it was largely due to this fact that he was deposed,” believes Leonid Ivashov, head of the Academy of Geopolitical Studies.

Satanovsky argues that the revolutionary wave will soon cover Saudi Arabia, splitting the kingdom into two territories – a western territory predominantly under the influence of Al-Qaeda, and an eastern Shiite territory, where Iran’s influence will prevail. “For the US, this is a terrible scenario that can’t get any worse,” says the expert.

Colossal losses will be sustained by the US stemming from a more-than-likely refusal of the Arab states to purchase US military hardware. Moreover, the refusal will not only be motivated by political reasons, but mainly by pragmatism: Arabs will redirect budget spending to social necessities.

Today, the Middle East is considered the main supply market by the US arms industry corporations.  “The US recently signed contracts for the supply of arms worth $90 billion with Saudi Arabia alone,” Ruslan Aliev, an expert with the Center for Analysis of Strategies and Technologies, told Trud. For comparison: Russia, the world’s second largest exporter of arms, has long-term contracts and portfolios valued at just $40 billion, of which $12 billion comes from North Africa and the Middle East.

Second place in the amount of pain the crisis will bring is held by Israel. The sole guarantor of its security in the Arab world was Egypt, and now it will most likely either assume a neutral position or become hostile toward Israel, the latter being more likely. It doesn’t have much hope left in the United Stated, either.

“If Arabs offer the US cheap oil, then it will easily give up Israel,” argues Leonid Ivashov. He believes that, in the near future, Israel will come to terms with the creation of an independent Palestinian state, under the conditions that will be dictated by the Arabs.

And finally, third place goes to Russia. There are two reasons for this: The Islamic radicals’ rise to power in the Middle East will inevitably inspire new terrorist activity of in the criminal underground in the North Caucasus.

The second unpleasant result for Russia will be similar to the US:  Russia stands to lose profitable arms contracts. Russia will lose the most money on deals with Libya, which were sanctioned by the UN (around $4 billion). Military supplies to Algeria, estimated at $4.5 billion, are also under question.

The biggest beneficiary from the revolutions will be Iran, which has been conducting a harsh anti-American and anti-Israeli policy.

“Most Arab countries whose leaders were either deposed or will be soon, had a strained relationship with Iran,” says Radzhab Safarov, general director of the Center for Modern Iranian Studies. He argues that now the country is becoming the sole leader of the entire Islamic world.

Second place goes to Turkey. “It has maintained stability, thus strengthening its authority,” suggests Aleksandr Khramchikhin, deputy head of the Institute for Political and Military Analysis.

Finally, the circle of three leaders is closed by Syria. In the near future, it will regain the Golan Heights territory, seized by Israel in 1967. Israeli Defense Minister, Ehud Barack, had recently indicated that his country is ready to sign a peace agreement with Syria.