Giving the “tsar-liberator” his due 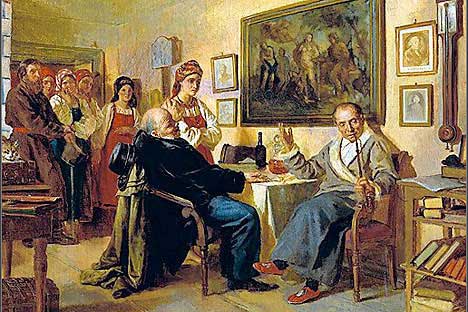 Russia abolished serfdom 150 years ago, but many people fail to appreciate the bold step taken by Tsar Alexander II.

On Feb. 19, 1861 (Mar. 3 according to the calendar used today) 1861, Russia abolished serfdom, a system that had forced peasants to work for a feudal lord while denying them the right to work for anyone else or of obtaining land for their own use.

The changes that came about during the peasant reform were certainly not forced upon Russia. Indeed, the country could not and would not live by the rules of the past any longer. However, nothing at the time prevented Tsar Alexander II from ruling the old way, in the image of his uncle and his father, the emperors Alexander I and Nikolas I. He could very well have kept the emancipation of the serfs progressing at a snail’s pace by organizing an endless series of commissions to examine the peasant issue, then reading their reports before filing them in a drawer to wait for better days. Russia’s defeat in the Crimean War of 1853-1856 against a coalition made up of the British, French, Ottoman Empires and the Kingdom of Sardinia was certainly humiliating, but not necessarily a death blow since there was no catastrophic loss of territory. Yet after this event, Alexander and his entourage saw more clearly that maintaining the old order would cause Russia’s developmental lag behind other nations to evolve into an irreversible catastrophe.

The tsar and his advisors knew that delaying reforms or major changes was impossible, so disregarding the reticence of the majority of landowners who had no desire to put an end to their supply of free labor and their established power, they set to work and began the process of dividing up lands and emancipating the serfs.

It is possible to criticize Alexander for his lack of preparation and haste in implementing serf reform. Or, like Soviet historians, accuse him of “pillaging” (plots of land were reduced by an average of 20 percent in the country). On the other hand, it’s also this tsar who rejected the Baltic model (1818-1819) of serf emancipation, one that gave freedom without land. Grand Duke Konstantin Nikolaevich, the tsar and Nikolai Milyutin all insisted the peasants be landowners.

When the reforms were announced to the serfs, many thought the authorities were simply concealing their true motives and sincerely believed that all lands would eventually revert back to their ownership. However, there was no massive uprising and the threat of a Pugachev-style peasant revolt never materialized, although reactionaries and conservatives used this to scare the population.

The emancipation of the serfs, it is important to remember, was the first step in bringing Russia’s economic and social institutions in line with the most developed countries. The judicial reforms of 1864 came on the heels of serf emancipation, creating a European-caliber constitution with juries and establishing the tsar’s subjects as equal under the law (with some exceptions, of course), regardless of title or property. This was quickly followed by the reform of provincial assemblies (the zemstvo) of 1870, creating quality local administrations and, finally, the reform in the military that cancelled the despised enlistment and forbade corporal punishment.

In 1877-1878, Russia was not content with simply liberating Bulgaria from Turkish domination. A group of Russian officials and generals drafted one of that era’s most democratic constitutions for their “sister nation.” It is possible that in doing so, the tsar and his entourage were keen to show other leaders that the Slavic peoples were able to live in constitutional monarchies.

Today, Alexander II can rightly assume his title of “liberator.” Unlike Bulgaria, however, which features a “tsar liberator” street in nearly every big city, his historical role has been undervalued in Russia, even during the Soviet era.

Unfortunately, Alexander II was not successful in completing his social and political reforms: on Mar. 1, 1881 (Mar. 13 in the new calendar), he was killed by members of the People’s Will movement. There had been other attempts on Alexander’s life, but they had not pushed him to isolate himself from his subjects. Although it may be fruitless to second-guess history, it is possible that, without Ignacy Hryniewiecki’s bomb, we would be living in a different country.

This article is abriged from a longer text first published in Vedomosti.