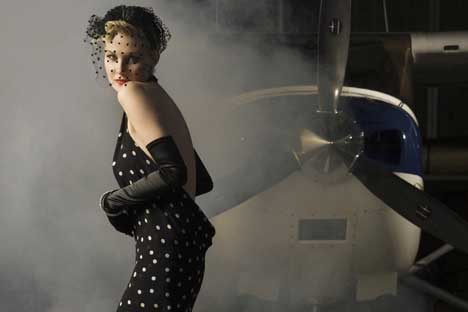 In honor of International Women's Day, we present you with our list of Russia's most attractive women (and men!).

Tatyana Golikova -- Russian Minister of Health and Social Development, Golikova is also the chief developer of swine flu treatment and preventative methods in Russia. She initiated the procurement and distribution of drugs to combat epidemics.

Natalia Vodianova - Model for international brands such as Yves Saint Laurent, Gucci, Calvin Klein, and Valentino. Vodianova has been on the covers of Vogue, Elle and Harper’s Bazaar and is also a known philanthropist.

Maria Sharapova - Winner of three Grand Slam tennis tournaments, Sharapova is the only Russian to make the Forbes Celebrity 100 list.

Darya Zhukova - Art gallery owner Darya Zhukova is known in Russia as the companion of Roman Abramovich, billionaire and owner of the Chelsea Football Club who divorced his wife to be with her.

Yekaterina Guseva - The Russian actress was featured in the Nord Ost musical based on the popular Russian novel The Two Captains. She accompanied her colleagues on an expedition to the North Pole where she planted a flag signed by the cast.

Olga and Tatyana Arntgolts - The sisters are actresses who are prominent in the Russian film industry.

Alsu - Alsu represented Russia at the Eurovision song contest in May 2000, performing the song Solo in English and taking second place.

Renata Litvinova - Renata is a screenwriter and director as well as a talented actress. She became a national celebrity in Russia after appearing in the series “The Border. Taiga Romance.”

It wouldn’t be fair if, on Women’s Day, we failed to tell you about Russia’s most desirable men. Of course, some women would tell you that a man should be only slightly less ugly than an ape. But reality refutes that claim. We thought our readers would be interested in our rating of Russia’s handsomest male public figures, a rating arguably even more biased than the first.

Arkady Dvorkovich - As economic advisor to President Dmitry Medvedev, Dvorkovich is one of the youngest high-ranking officials in the presidential administration.

Dmitry Kharatyan -  After appearing in the 1988 historical adventure film Gardemariny, a movie about political intrigues and romantic passions in the 18th century Russian Empire, Kharatyan become a sex symbol in the Russian movie industry. He continues to appear in films and remains one of Russia’s most popular actors.

Dmitry Dyuzhev
- This young actor has appeared in many successful Russian films, including The Brigade, Blind Man’s Buff, and Maximum Security Holiday.

Dmitry Sychev - One of the most popular football players in Russia, Sychev is a striker on the national squad known for his terrific throw-ins.

Ilya Kovalchuk - In 2008, he destroyed the Canadian team’s hopes of becoming the world ice hockey champions. Playing for the Russian team, he scored twice, once five minutes before the end of game to tie the score and then again in overtime, wresting victory from the Canadians.

Askold and Edgard Zapashny - One of the best known circus duos in Russia and the world, the Zapashny brothers are animal tamers know for putting on a colorful show. They are the fourth generation of a famous circus dynasty.

Vladimir Mashkov - Mashkov is a sex symbol in Russia’s movie industry. In 1997, he starred in Vor (The Thief), which was later nominated for an Academy Award.