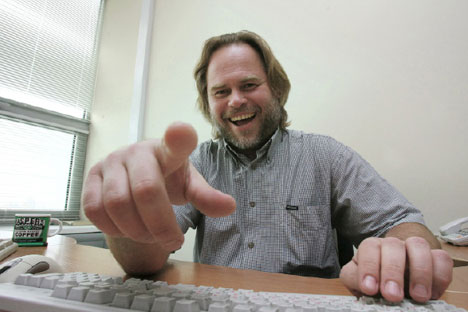 Russia's IT industry has bounced back. Medvedev's innovation agenda and the surge in PC sales will ensure the boom will last longer.

“Extraordinary potential” is how then-Governor Arnold Schwarzenegger described Russia’s technological future during his visit in October, encouraging investors to participate in the Skolkovo innovation hub and tap into the intellectual capital on offer.

While the hub begins to form in the suburbs of Moscow, and may someday bring research and development dividends to President Dmitry Medvedev’s hoped-for diversified economy, the ongoing business of information technology is returning to its pre-crisis glory.

In 2010, Russia's IT market value was an estimated $20 billion, according to International Data Corporation, or IDC, a prominent international IT analytics firm.

For comparison, the U.S. market is estimated at $531 billion, while BRIC leader China had $96 billion in IT business last year.

Last year was “surprisingly good” to the IT industry, said Robert Farish, regional director at IDC for Russia and the CIS, adding that the 30% growth was nearly twice what had been forecast.

The potential is evidenced by key industry metrics. With an installed base of 69.1 million personal computers by the end of 2010, the country achieved a penetration rate of 43.6%. The Communications and Press Ministry estimates that that will grow to 52% by the end of 2011, while last year's 66.4 million regular Internet users will grow to 80.2 million.

Though computer hardware sales returned to pre-crisis levels by mid-2010, and many mid-sized projects were ordered and completed, expected major outsourcing deals — in which companies divest themselves of their IT departments and allow external service providers to do their IT — did not materialize.

This year, industry players expect continuing growth while the government prepares to spend big to provide Internet-based services to the populace. Observers have consistently seen a direct link with Russia’s IT spending and the price of oil. So with black gold approaching $100 per barrel, the market looks good for 2011.

The “election” hiccup, which also results in deferred IT spending every time there is a major election — as government decision makers avoid big commitments prior to possible management changes — is also being factored into IT suppliers' plans in light of December's State Duma race.

But the overall mood is optimistic. “Certainly the continued mobilization of resources focused on Skolkovo and President Medvedev’s innovation agenda was a highlight of 2010,” said Ron Lewin, managing director at TerraLink, a major IT services company in Russia and Kazakhstan.

Skolkovo is trying to differentiate itself by focusing on research and development in science and technology, and not just information technology. But the local view of the project is sometimes skeptical.

“2010 has not changed anything in my perception of this project,” said Nikolai Komlev, managing director at APKIT, a Russian IT lobby. “I still view it as a dubious undertaking — or at least the kind that has little to do with the development of IT business … in Russia.”

Others call Skolkovo “a political project” and refuse to comment on it, saying that in Russia, business and politics are best not mixed.

But Skolkovo alone is not enough to modernize the economy. Centers like it should be created across the country, Pryanishnikov said.

Almaz Capital pledged $30 million to build a cloud computing incubator, the first project to be approved. Microsoft, Cisco, Siemens and Nokia have all announced intentions to participate in Skolkovo.

Regardless of grandiose projects, the average citizen has felt the power of information technology in the palm of his hand or at his fingertips, as smart phone and personal computer sales boomed.

“The PC market and the smart phone market both grew in excess of 60% in 2010 in unit terms,” Farish said. “A lot of that has to do with changing patterns of consumer choices.”

The product offering has changed a lot between 2008 and 2010, and prices significantly dropped, not just for Russia.

“Now there are products for a far-broader range of potential buyers than there were before,” Farish said. This brings out first-time buyers — students and families buying computers for their children, analysts say.

Many foreign IT manufactures until recently have been running an offshore business, in which they sell their products to Russian partners’ branches abroad, leaving them to transport the products and navigate the murky waters of customs. This resulted in vendors losing control over their pricing in the market because their products went through a lot of hands before reaching the local market, analysts say.

Shamil Shakirov, president of I-Teco, a leading systems integrator, pointed out unreliable delivery times by the vendors as one of the key problems in the relationship between foreign and Russian companies.

One reason for the missed deadlines was vendors' conservative estimates of sales for 2010 early on, which resulted in cutbacks in production capacities. Currency fluctuation is another factor putting local partners at risk.

The government has ostensibly been struggling to bring IT companies onshore for the last 10 years, as it would increase customs duty and tax revenues.

Foreign companies ignoring the reality of situation in the country, especially customs regulations, has been another problem, said Anatoly Karachinsky, president of IBS Group Holding, one of the country’s biggest IT companies.

Things began to change in 2006, when the IT market size began to become attractive to foreign companies, and the current boom helps them to want “to create equal opportunities for all,” Karachinsky said.

Some progress has been made, with Hewlett-Packard finally opening its local PC production facility, along with partner FoxConn, in St. Petersburg in April of last year, and Microsoft’s decision to switch to ruble-based contracts last month.

“In the past, most vendors worked almost exclusively through major distributors and did not have stock in Russia … Now vendors are more comfortable and established in the market, are working directly with clients more often, and are more integrated into the industry,” said Lewin, of TerraLink.

This will give manufacturers a much higher profile role in the local industry and in their relationships with customers, which could make many large Russian IT companies uncomfortable.

Market players unanimously call 2011 the year of cloud computing — in which large corporations get their information technology, or parts thereof, as a service, and don’t have to be concerned with where or on what platform the work is being done.

“Everything is going cloud,” said Owen Kemp, president of Newclouds and former vice president of Hewlett-Packard.

Kemp says it has multibillion-dollar potential in Russia and more than trillion-dollar prospects worldwide. Cloud computing will allow companies to cut IT budget spending by 10 to 30%, said Alexander Galitsky, an IT venture capitalist and Skolkovo board member.

As IT is becoming a service and Russia is slowly catching up with other countries, the need to use cloud computing to optimize businesses will become evident, explained Pryanishnikov, of Microsoft.

The share of IT services in the total volume of IT market in Russia is lower than the average in the world and is significantly behind this number for Europe and the U.S. I think the time has come to change that,” he said.

Cloud services have been slow to gain acceptance on the Russian market.

A possible hindrance to the growth of IT services is “a culture of doing and owning everything yourself and not trusting something that is available to all and hosted somewhere in a intangible cloud or in a third-party’s data center,” Kemp said, pointing out that educating people about cloud computing might help the process.

With a stated goal to increase transparency overall, the government’s planned spending of 80 billion rubles ($2.6 billion) in 2011 on IT systems to provide bureaucratic services to the populace is a key element in the battle for efficiency and against corruption.

As part of this program, called “The Informatization of Society,” the Communications and Press Ministry is auditing and consulting on the IT budget of nearly every major federal agency.

Robert Farish sees “some genuine progress in improving the efficiency of the working of the central government … in the use of IT,” and the start of delivery of real IT services to the population.

Gosuslugi.ru, the portal providing public services, had 5 million unique users in 2010. “For the first year, these are some really good numbers,” Shyogolev said.

The government might be overestimating its efforts so far to improve the quality of life of its citizens, said Karachinsky, of IBS.

Lack of coordination between ministries and government agencies remains universal across all industries, he said.

“Take our security system, for example. It looks like there are many agencies responsible for security, but it turns out that you can just walk into an airport and blow up 150 people,” Karachinsky said. “It's the same with IT.”