Kremlin to roll out magic card that does it all

Olga Razumovskaya
the times of moscow 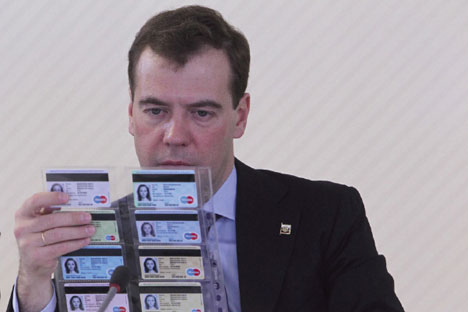 Russia is set to launch a multi-purpose universal identity card by 2014. The master card has, however, sparked anxieties about its potential misuse for fraud

Imagine a piece of plastic that gets you a doctor's appointment, pays your bills, allows you to rent a car or buy a plane ticket and even get Moscow registration faster than the sham ads in the Moscow metro. President Dmitry Medvedev promised last week that three years from now all Russians will have this magic multi-purpose card.

He set May deadline to the government to work out the funds required to introduce the universal electronic card, or UEC, for all citizens and urged banks to not to take advantage of card users at the meeting of the commission on modernisation and technological development of the economy.

The UEC, which will be a kind of Swiss army knife of plastic cards and serves as a combination of a state electronic ID, driver's licence, car insurance and migration cards among other possible perks, should be available to Russians by 2014, according to the federal law.

The five-year project to create the new e-card could cost the government as much 150 billion rubles ($5.2 billion) to 170 billion rubles ($5.9 billion), Economic Development Minister Elvira Nabiullina told reporters at the modernisation commission meeting. The cost of card issuance alone will be 40 billion rubles, which puts the cost of one card at 265 rubles ($9), Nabiullina said. She promised that all investments would be matched by savings, as the new e-card will replace the Russian version of social security cards.

Banks, however, are sceptical. German Gref, chief executive of state-run Sberbank, one of the three banks that will help finance the card's development said banks have so far been reluctant to provide funds for the project because it's "of little interest" commercially, Bloomberg reported.

Another danger of introducing such a card is the potential for identity fraud, which often plagues countries that have introduced systems of electronic identification and rely heavily on cards similar to the UEC, experts say.

This is especially the case in Western countries, said Timur Aitov, executive director at the Association of Russian Banks.

Medvedev confessed that the government has not found a good answer to the question of protecting its citizens' data and he admitted that personal information often circulates on the Internet. But "on its own, the protection of such information should not be an obstacle to making the decision to issue cards," he said.

The fact that the card will use a foreign chip should also not stand in the way of the project taking off, he said. "[We] will not wait till we create our own chip, otherwise it will never be made,” he said.

While Medvedev promised that the new card "will improve the lives of tens of millions of people" by cutting the red tape and allowing Russians to do everything from paying their gas bills to making a doctor's appointment online, experts see ample potential for the card to turn from a magic wand into a weapon that can be used against its owner through identity theft. Cases of fraud involving plastic debit and credit cards in Russia run as high as 1% to 1.5% of all cards, and not all of them are reported. The privacy debate should strike a chord in India, which is also in the process of introducing unique identity cards. Nandan Nilekani, an IT entrepreneur who heads the project, has assured that personal data will not be accessible to everybody, as the government gears up to roll out 600 million cards by 2014.

Medvedev has encouraged the government to think about ways to regulate tariffs on transactions for commercial/ state services, which are controlled by banks.

Also, Medvedev has called for “fair and objective” discussion of the design of the new e-card and proposed that people make suggestions on the Internet. "I hope that it will seem fairer than the discussion of mascots for our (Sochi) Olympics," he said.