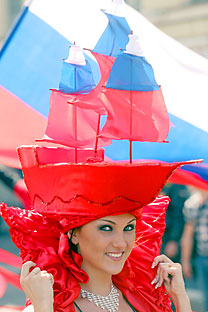 A new poll shows that Russia's recent PR attempts are paying off in some regions of the world.

Russia's recent efforts to improve its PR appears to be having the desired effect. A BBC poll released this week revealed that global attitudes towards the country have improved significantly in the last 12 months.

The poll, conducted by GlobeScan/PIPA, asked a total of 28,619 people to rate the influence of 16 major nations, plus the European Union. Although the view of Russia's influence in the world remains negative overall at 38 percent, those who see the country having a positive effect grew 5 percent since the 2010 poll to 34 percent.

The news will be welcomed by the Kremlin, which has been making clear efforts to raise Russia's profile as it bids for foreign investment to help propel its modernization drive. The 2008 war with Georgia was a nadir in its PR experience, as the country closed itself off from international media while the Georgian leadership rolled out a wide-ranging assault on global perception. That saw the world side heavily with Tiblisi's version of events during the conflict, although that view swung as international reports followed in its wake.

Although there have been numerous hiccups along the way - refusing entry to a Guardian journalist early this year is the latest example - the result of a more 'pragmatic' foreign policy and efforts to improve ties with the West now appear to be reaping dividends.

The reset with the United States, reinforced this week during the visit of Vice President Joe Biden to Moscow, is having a noticeable effect on attitudes in that country. Thirty-eight percent Americans now have a positive view of Russia's influence in the world--an improvement of 14 percent in the last year.

However, Russia's image has taken a step back in some of the major EU states, as it has struggled to make the same headway with the 27-member bloc. No doubt, the bright media spotlight on the second trial of Mikhail Khodorkovsky did little to help either.

In the UK, despite the best efforts of the coalition government to improve relations, negative views of Russia there rocketed 22 percent to hit 55 percent overall. And the Kremlin will be especially disappointed to see 20 percent more Germans viewing Russia in a poor light this year. The Central European country enjoys one of the closest political and business relationships with Moscow in Europe - but 58 percent of the population still eyes Russia with suspicion.

The Russian authorities can take solace in the fact that its efforts of the last few years to build relations in Asia continue to pay off, with its fellow Brics having the brightest view. The outlook also reflects the growing fellowship of the emerging giants of the east as global economic might swings towards them and away from traditional power bases. Indians have the most positive views of Russia of anyone around the globe--58 percent of them view the country favorably.