Peering through the dust in the Arab world 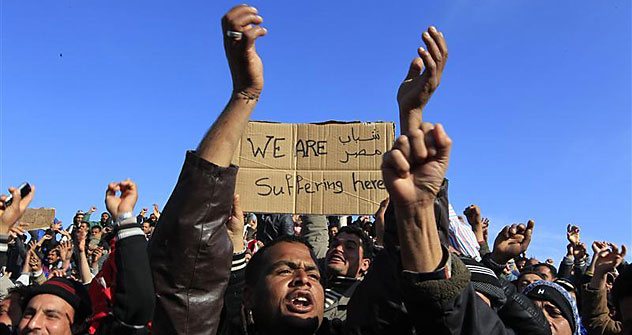 Russia needs to reassess its foreign policy goals for the Middle East.

Conventional wisdom suggests waiting until the dust settles before drawing conclusions from the events of the past, but the “dust” generated by the public unrest in North Africa and the Middle East is so thick—and shows no signs of abating– that in this case, Russia can’t wait. It needs to watch the uprisings in the Arab world carefully, and be prepared to face the consequences of the rapid geopolitical changes in the region.

The first, most obvious and, at first glance, not-so-unpleasant of these consequences is the rising price of oil. After steadily climbing over the past two years, oil prices shot through the roof at the end of February, when the “Arab revolution” spread into oil-rich Libya and threatened to engulf the world’s second-largest oil producer, Saudi Arabia.

In the short run, Russia will only benefit from this trend. Since the beginning of the year, Russia’s flagship Urals export blend has averaged $98 a barrel, 30 percent higher than planned in the budget. According to some projections, such a price will help the Russian government balance the federal budget by 2014 (earlier than expected) and, by the end of the year, double Russia’s Reserve Fund from its current $25 billion to $50 billion. Additionally, the potential interruption of gas supplies from Algeria—which would further increase the EU’s dependence on Gazprom gas—will strengthen Russia’s position in its negotiations over the EU’s “third energy package,” a set of proposed legislations that Russia considers damaging to its economic interests.

However, the additional oil revenue is likely to come with its own price: inflation. The influx of extra cash in the economy will make it extremely difficult to keep inflation below its 2011 target of 7 percent. In a more strategic sense, continued spending of extra oil cash will only exacerbate the country’s dependence on export of energy resources and thus undermine President Dmitry Medvedev’s drive to modernize the Russian economy. Moreover, skyrocketing oil prices will sooner or later result in a second wave of the global economic crisis. A precipitous fall in energy prices will inevitably follow and, should this happen, Russia will find itself in the same dire economic situation as in 2008-2009.

More negative developments may emerge even sooner. Russia stands to lose big if the Gaddafi regime in Libya collapses and is replaced by a pro-Western proxy. The arms embargo on Libya imposed by the UN Security Council is likely to interrupt already ongoing arms sales negotiations, which could cost Russia up to $4 billion. The future of Russian arms sales to the region also stand to be affected if, as some Russian analysts predict, social spending becomes the first priority for certain Arab rulers. And, if the situation in Iraq after the fall of Saddam Hussein is any example, Russia’s economic interests in Libya—estimated at $70 billion—will be in jeopardy, too.

The long-term consequences of the happenings in the Arab world might be equally unsettling. Granted, any large-scale repetition of the public unrest, Arab-style, played out on the streets on Russian cities looks highly unlikely. Yet, turbulence in the North Caucasus region where the conditions on the ground—a large ratio of young people, high unemployment, rampant corruption—bear troubling similarities to those in Tunisia and Egypt, can’t be completely excluded. Moreover, such a public revolt is possible, perhaps even likely, on Russia’s borders in Central Asia, where political and social instabilities already produced a string of violent anti-government mutinies in the years following the collapse of the Soviet Union.

Yet, the things are not only doom and gloom for Russia. The changes in the Arab world may provide Russia with an opportunity to increase its influence in the region. The enthusiasm with which the United States and its European allies supported public unrest in Arab countries – and their readiness to dump unpopular leaders that have before enjoyed full Western support – have frightened Arab ruling elites and made them feel betrayed. Now, they might be more disposed to viewing Russia – with its refusal to meddle into internal affairs of other countries – as more trustful and reliable partner for the future. Russia will be wise to take advantage of this change of heart.

Attempts to predict what happens next – in particular, which Arab country may or may not succumb to the “Arab revolution” virus – are ultimately fruitless. Even in Egypt and Bahrain – where a tentative calm seems to be holding for now – violence may return at any moment. One thing is clear though: The Arab world has entered the era of a deep, tectonic change whose outcome will be unknown for very long time.

In other words, the “dust” that fills the air in Arab countries is not going to settle any time soon and Russia will need tools to see through it with clear eyes for years to come.