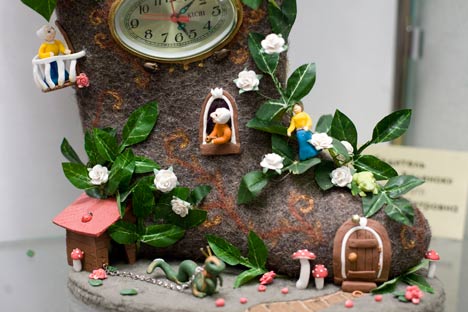 Photos by Liza Azarova from the Valenki museum in Moscow

One of the dominant fashion trends of the winter season is the traditional Russian footwear known as valenki. This year, it was as easy to spot Russian fashionistas wearing valenki in the chilling frost as Australian UGG boots. Taken from a practical perspective, valenki are the best option for the Russian winter—they keep feet warm out in the cold, while galoshes provide protection from the chemicals sprayed onto pavements to prevent people from slipping on the ice. From a fashion perspective, the traditional Russian footwear is no longer boring. From time immemorial—or at least since valenki as we know them appeared in the 17th century—wearers never selected them because of their striking design. Today, the traditional black and gray boots (examples of which can be found at the Russian Valenki Museum in Myshkin) have been replaced by fashionably colored and ornately embroidered models. While some are mass produced, there are also exclusive designers who create valenki—they could be the ultimate original gift for the fashionista in your life.