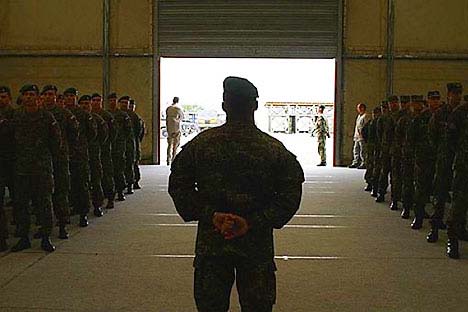 A new system to identify suicide bombers may represent the closest cooperation yet between Russia and its western allies.

The recent high-profile terror attacks in Russia have spurred Russia-NATO cooperation in fighting terrorism. Russia and the North Atlantic Treaty Organization are in the final phase of a classified joint project called Standex to help identify low-capacity bombs carried by suicide bombers. The initial tests of the remote explosives detection system will be carried out in the Paris metro. The technology is scheduled to go into mass production ahead of the 2014 Winter Olympics in Sochi. Moscow has called it an unprecedented success: For the first time NATO and Russia have produced an integrated anti-terror system.

The system, dubbed the “electronic nose,” will undergo a trial run this spring. The tests will establish whether Standex is able not only to identify the presence of explosives in the crowd, but also to pinpoint the exact location of the bomber. “The idea is not only to detect the explosives carried on a person remotely, but also anonymously,” a source familiar with the project said. “No one will know where these ‘electronic noses’ are located.” If these and subsequent tests are successful, the system will go into mass production.

“Specialists aren’t under pressure to deliver. Having said that, the project schedule is tight, and maximum support is provided. If it’s up and running by 2013, it will play a role in securing the Sochi Olympics in combination with other measures. In any case, it will deliver a tangible blow to terrorists,” said the source.

Paris was not just chosen for it’s dense population and highly trafficked metro: France is one of the five Russia-NATO Council countries involved in running and financing the project. The others include Russia, the United States, Germany and the Netherlands. They will all hold the copyright to the new anti-terror system. In Russia, experts from the Khlopin Radium Institute in St Petersburg (a Rosatom subsidiary) are involved in the project. In addition to contributing intellectually, Russia is also providing financial support, although sources say that since the project is not particularly expensive, the Russian financial contribution is relatively small.

Neither Russia nor the NATO alliance is publicizing the work on Standex. The project was briefly mentioned in a NATO-Russia Council Joint Statement after last year’s meeting in Lisbon. Dmitry Rogozin, Russia’s permanent representative to NATO, said that the project was conceived several years ago at the Russia-NATO Council’s suggestion. “Its initiators envisaged potential cooperation of countries with complementing scientific projects in the works. So they selected Russia with its Khlopin Institute, which carries out projects that can be easily incorporated into the common context,” Rogozin said. He added that the latest high-profile terrorist attacks, including the ones in the Moscow metro and at Domodedovo airport “seriously resonated with NATO at the human level, which transformed into professional support for the project’s intensification.”

The Russian Foreign Ministry, in its turn, has said that Standex may become the first and most successful step in Russia-NATO integration. “A uniform Russian and NATO alliance infrastructure for protecting citizens will be put in place,” a high-ranking Russian diplomat said. Rogozin added: “This helps increase the capital of cooperation in areas that are beyond doubt. We stand at the threshold of some interesting events that will usher in a real transition to strategic partnership with NATO.”