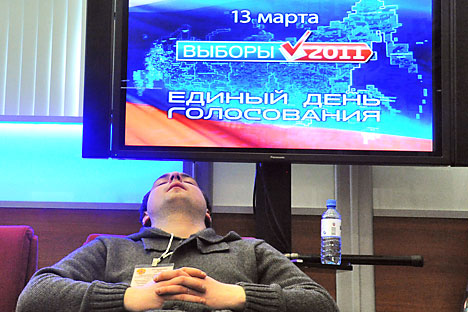 United Russia claims another victory, but at what cost?

Russian Prime Minister Vladimir Putin has said he is satisfied with the results of the regional legislative assembly and local government elections that took place on March 13, which resulted in widespread victories for the ruling party United Russia. Putin said his party once again showed that it is “the leading political force.”

United Russia had to use a little bit of force in order to show what a strong leader it is. Observers noted:

Behind the scenes, a dirty PR campaign has been launched against undesirable candidates and election officials have refused to register some independent candidates running for deputy and even some parties (for example, the Yabloko party’s list was not registered in the Republic of Komi or the Tambov region).

This is a partial list of the methods that United Russia had to use to show that it is “the leading political force.”

The first blatant violations of democratic election laws in Russia took place during the 1996 presidential elections, when dirty PR tricks were first tried out on Russians and the public consciousness was manipulated with the help of major media outlets, administrative pressure and mass violations in voting procedures as well as vote counting. Boris Yeltsin’s appointed successor, Vladimir Putin, inherited the full arsenal of these methods and the party he leads has shown it is willing and able to utilize it.