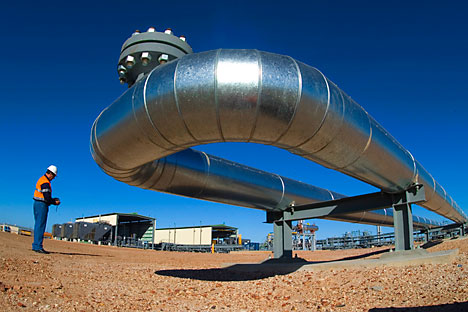 "The Voice of Russia" podcast

In February, Russia began producing electricity using methane gas from coal beds. The expansion of this technology has the potential to considerably reduce methane emissions from mines and free up natural gas for export.

Ruslan Pakhomov, GE Energy’s executive director for Russia, said that the two gas turbine plants in Talla currently produce one megawatt of electricity, but once the project reaches its full production capacity, the generators will be able to increase the plant’s electricity output in the by 100 times. “GE-Jenbacher technology uses the gas coming directly from the coal beds as a source of energy, which makes it possible to reduce methane emissions by 85 percent compared to traditional coal production,” Pakhomov said.

Stanislav Zolotykh, general director of Gazprom Production Kuznetsk, which operates the plant, said seven wells are currently yielding gas at the Taldin field. “Everything was built from the ground up here in the taiga: 25 kilometers (15.5 miles) of roads, three bridges, power lines. The infrastructure was set up last year,” he said. Three teams will continue to work in the spring and “10 wells will already be in operation,” he said.

Gazprom has invested more than 2 billion rubles ($70 million) in the project over the past two years and plans to invest another 1.5 billion ($52 million) in 2011.  A Russian-government approved program calls for Gazprom to invest more than 80 billion rubles ($2.8 billion) in the project by 2020 in order to increase industrial methane production from coal beds in the region. According to Zolotykh, the project will only start to turn a profit in the seventh year of operations.  Gazprom intends to primarily sell the methane locally since, unlike natural gas, coalbed methane is impossible to transport long distances. As a result, coal miners are expected to become its main consumers.

Aman Tuleyev, the governor of the Kemerovo region, has predicted that the explored methane reserves in the region’s coal beds will be fully capable of meeting the Kemerovo region’s needs for gas and will replace the natural gas it used to receive from a pipeline in the Tomsk region.

Gazprom will thus be able to free up more than 4 billion cubic meters of gas per year in the Tomsk region, which it can then ship abroad, the governor said.

While this resource may be part of plans for the future, four homes in the region – a farm house and three dachas – are already receiving electricity from the first methane power plant, said Lyubov Artemyeva, head of the local administration.

Viktor Krasulin, a farmer and Zhernovo resident, is pleased with the results so far. “We were hooked up to electricity from the Taldin reserve a few days ago. Before that, we lived without any light at all. Then they installed the gas generator and now we are happy,” he said.

Residents of neighboring villages will soon share the happiness. Alexander Balabanov, chairman of the construction and housing committee for the Novokuznetsk district administration, said the administration is currently waiting for production to be sorted out for the distribution of gas tanks. “We have agreed to work using this option. We’re waiting for proposals on filling and its cost,” he said.

The success of the first methane field has prompted the government to consider classifying coal bed methane as an extractable resource. Regional leaders have also called for introducing a zero tax rate on extractable resources for methane production in the Kemerovo mining areas.