Russians down in the mouth 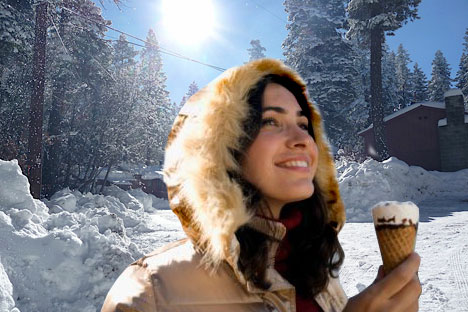 As William Churchill stated, "These people will never be defeated". Source: Kirill Andreev

Russians may be pessimistic about the situation at the moment, but don't count them out.

Tim Ash and his colleagues at Royal Bank of Scotland were in Moscow on March 14-15 for a look-see. Russia is the “flavor of the quarter”: the economy is doing far better than expected and the budget deficit could disappear completely this year, four years ahead of schedule, among other things. And it is one of the few places in the world taking in new money, with some even suggesting it could emerge as a possible safe haven in the face of instability in the Arab world and Japan's woes.

But Ash says he was surprised to find the locals so pessimistic about their prospects. "In terms of overall impressions from the trip, we were actually taken aback by the generally downbeat views of locals on the economy. While accepting that high oil prices would provide a short-term boost to the economy, there was concern that this would likely just discourage policymakers from addressing deeper seated structural weaknesses revealed through the crisis over the past three years," Ash wrote in a note on the trip.

Ash's comments on the pessimism among locals is poignant. I have often noticed this: Russians in general tend to be a lot more downbeat about the future of their country than the foreigners who live and work here.

I'm not sure exactly what the cause of this is. One factor is surely war-fatigue. Russians have literally been battling to build a new life/country for two decades now, and it has been really hard work. What little progress was made in the 1990s was almost all knocked down in the ruble crisis of 1998 and most had to start again and rebuild their businesses. (They did and the upshot was there was a lot less conspicuous consumption and a lot more investment after that crisis: Who talks about Novy Russky these days?).

Under Vladimir Putin, stability and an economic boom appeared, and in 2007-ish there was some real optimism about the future (look at all the babies in Moscow - everyone's kids here are the same age: 4 and 7). But the 2008 economic crisis knocked everything down again.

Russians are simply tired of struggling, if you ask me. The foreigners love the dynamism of Russia and the opportunity it presents, as it stands in sharp contrast to the ossified social hierarchy of home (with the exception of the Internet sector, which is partly why that's so sexy to younger people).

However, as one of my Russian colleagues said to me the other day: "You are already an adventurer simply because you are here, so this all suits you. And you have the option of leaving anytime you want. Me, I have to put two kids through Russian schools. I rely on the Russian medical system. And I will be dependent on the Russian pension system. That is a totally different deal to yours."

The recent crisis has depressed everyone and in 1998 it took four years for moods to lighten. I was surprised at how well most of my friends took this crisis compared to the black pall that fell over Russia in 1998. But that's not to say they are happy.

Moreover, with Duma and presidential elections looming, there is more uncertainty on the near horizon. The crisis undid Putin's implicit promise — "don't meddle in politics and I will fix the economy" — and people are angry because they can see that the state is only pretending to listen to them. When profit margins were fat and wages soaring, it didn't matter. But now the opposite is true: They are thinking more about politics and feel betrayed by the government.

For the country's oligarchs, the situation is slightly different, although they are also thinking about politics. Everyone is nervous because of the anti-graft campaign. Everyone is assuming that someone big—either from business or the administration—is going to be arrested to serve as an example. This would help the anti-graft program, which is not doing well at the moment (everyone started paying taxes after former Yukos CEO Mikhail Khodorkovsky was arrested in 2003), but it would also play extremely well to the gallery ahead of elections. So, many rich Russians have been sending money abroad and diversifying their businesses internationally.

Personally, I think this is a temporary thing and that everyone will cheer up again after the elections are over and the economy is moving again. After all, things are getting better in Russia pretty quickly, despite the big bumps in the road. (And spring will help, as everyone is very depressed this time of year as the snow turns to slyakot, mountains of slush.)

And Russians don't give up—ever, regardless of how down in the mouth they are. They have this Herculean ability to deal with suffering. One of my favorite Winston Churchill quotes is from a trip to Moscow in the depths of winter during World War II: As he was being driven to see Stalin, a group of Russians standing in the snow eating ice cream was pointed out to him: "These people will never be defeated," he replied.