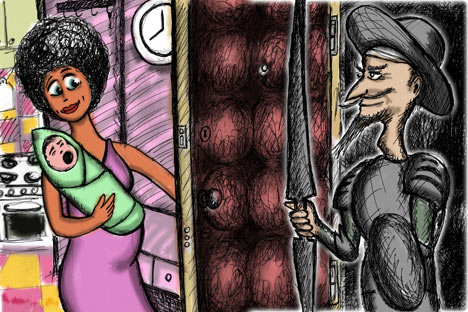 Domestic agencies in Russia are branching beyond nannies and drivers to offer "fathers" for rent. What are the consequences of these experiment?

His name is Vladimir and he is 35 years old. He met Dima's mother, Irina, in a fancy restaurant in Moscow where he was working as a security guard. Irina offered him the job of acting as the father of her child and assured him that he would be well paid. At the time, Vladimir was having some financial difficulties and accepted the proposition. Dima, who was five year old at the time, was used to living without a father. In fact, he never knew his father. His mother told him that his father was working as a spy in Cuba and couldn’t write or call his son. But he suddenly appeared.

“I don’t like children,” confessed Vladimir. “I don’t have children of my own and don’t know if I ever will, but I needed the money and was willing to do almost anything to get it. I remember the first day I met Dima, the three of us walked in the park together. I told him, actually made up, some stories about the buildings we saw. The poor kid was mesmerized. Then we went to a restaurant. I took a cherry and flung it at him. He loved it. He would imitate everything I did, just because ‘his daddy’ had shown him. What surprised me even more was when I went to tuck him in bed the first night and he hugged me and said, ‘You’re the best dad in the world, way better than Sergei’s!”

Irina was desperate. Her son was getting less obedient every day. Her friends recommended that she rent a dad to see if it would change things. The child of a mother with enough money to spoil him, Dima didn’t understand the meaning of “no.” At five, he ruled the house. He refused to dress alone or brush his teeth. He didn't listen to his nanny and once even locked her in the bathroom. Irina thought that only a man would be able to help her raise her son.

Vladimir would wake up at six o’clock every morning to be at his “son’s” home at seven. He would wake him up, prepare his breakfast, feed him and then go to work and return at night. One day, he decided to teach Dima to wash his face with cold water. He said, “This is how all men do it”. Since then, Dima has washed his face with icy water, even though until a short time ago his mother had to force him to take a bath. Four months went by like this.

“I started getting tired,” said Vladimir. “Irina paid me 1,000 euro a month, which was great, but the kid exhausted me. I told Irina, of course, but she didn’t want me to leave. She was very happy with my work. Her child had changed a lot: He picked up his toys, obeyed his mother and even started learning English. One day we called Dima and told him that I had to return to Cuba. He asked me how long I would have to stay there and I told him two or three years. He got very angry and told me that he would never become a spy because it would mean he would have to abandon his family.”

Vladimir says that for him it was only a job and he tried to do it in a way that the child wouldn't realize it was a farce. But a month later, he hid in the park to watch Dima play. And sometimes he manages to visit Dima without him knowing.

Irina isn’t only woman who rents a father for her child. In Moscow and in other Russian cities, there agencies that specialize in domestic services such as housekeepers, cooks, drivers and nannies also offer daddies for rent. The cost of renting a father in the Russian capital is around 500 rubles (15 euros) per hour and between 4,000 and 6,000 rubles (100-150 euros) per day. In the regions they tend to charge a little less.

Most rentals are men between 35 and 40 years old; they are usually professional psychologists or former soldiers. Why soldiers? According to the Moscow agency The Lights of the Capital, many mothers consider them more trustworthy and prefer them to men from other professions. If they have the choice between an engineer and a doctor, they often ask, don’t you have any soldiers?

The job of a “daddy for hire” is different in every case. Sometimes they are hired for the weekend to play with the child, take him to the movies, help him with his homework, go to the countryside, to the park. But they also do chores, take the children to school, for a walk or spend time with them at home in the afternoons.

Psychologists, educators and other experts disagree on the wisdom of “daddy for rent” services. Clearly something is wrong in society if services like these are necessary. But the more important question is what effect this type of experiment has on the children. Some psychologists who agree with the experiment say that communication with a man, even if only a babysitter who comes to the house on weekends, is a very positive and important experience for any child who doesn't live with his father. Others maintain that this type of communication can cause severe psychological trauma in children, particularly if they are led to believe that the babysitter is their true father.

We could say that Dima was cruelly traumatized at least twice, when he saw his fake father for the first time and then when he told him goodbye forever. The worst part of this story is that nobody knows if Vladimir will be his last “dad” or if others will show up.