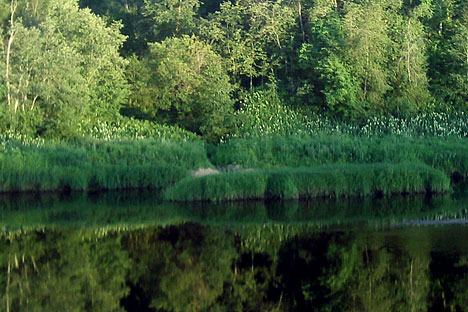 Ill-conceived regulations and mismanagement are destroying the forests that hold such a significant place in Russia’s worldview.

“The Russian forest” is a brand that has evolved over the ages. It is a place where robbers, old-believers, runaway peasants and religious hermits sought refuge. It was the name of a popular eau-de-cologne for men in Soviet times and the title of a heavy philosophical novel. It gives its name to a confectionary company, a timber exhibition and numerous housing developments, cafés, small hotels and paintings.

The UN has declared 2011 as the International Year of Forests, and given the Russian identification with the forest, this might as well be the “Year of Russia.” Speaking at a UN roundtable on “Forests for People,” Alexander Panfilov, deputy head of the Russian Federal Forestry Agency (Rosleskhoz), said: “In spite of the economic crisis, there is still a high level of investment in the agency, new wood-processing industries are being built, more jobs are being created and the forestry management system is improving. The forestry management system is becoming more effective, and forest legislation is being improved. Special attention is being paid to providing new technical equipment, developing the necessary infrastructure and training staff.”

All these worthwhile initiatives are very necessary for the Russian forest, especially in light of what is actually happening there. Today inRussia, a forest ranger is expected to look after 70 square kilometers of forest preserve. It is his task to go around his 70 square kilometers of forest every day, and keep the area safe from illegal logging, poachers and fire hazards, but a forest ranger should not walk the forest alone, which means rangers have to survey 140 square kilometers per day in pairs. The budget of a particular forest preserve will get about 25 cents per hectare per year for fire safety measures—and this is in a nature preserve, an especially protected forest. You can imagine what happens in an unprotected forest.

It is hard to doubt the truth of what the Forestry Agency spokesmen are saying. However, the main obstacle keeping them from delivering on their promises is the Russian Forest Code, which came into force in 2007. Additionally, the organization is top-heavy, the forest management systems are in an almost constant state of reform, and inter-departmental divergence is on the rise.

At present, the main laws on forest management are passed at the federal level. Income from the forests goes into the federal budget and is then partly returned in the form of meager subsidies while the actual management of the forests is the responsibility of regional governments.

Until recently, the protection of forests in remote or sparsely-populated areas was taken on by subdivisions of a single federal structure – the aviation forest protection service (Avialesokhrana); it was this organization that put out the biggest and most dangerous forest fires. With the introduction of the new Forest Code, Avialesokhrana was split up between regions and was dissolved into many independent organizations, many of which were unable to stay afloat. The possibility of a centrally organized redistribution of qualified staff over the regions has still not been realized, and this was obvious in 2008, when 3.6 million hectares of Russian forest were lost to forest fires and also in 2010 when 2.8 million hectares went up in flames.

According to Alexei Yaroshenko, head of the forestry department at Greenpeace Russia, the new legislation has made it very easy to develop forest land, including forests of particular natural or social importance. For example, it does not in any way regulate the status of forests growing on land intended for agricultural use, leaving the way clear for their seizure and development. An area of forest can actually remain as forest on paper even if the area has a housing development on it—the new Forest Code allows for forests to be developed without a formal change in their status.

Still more important is the fact that the new forest legislation has significantly reduced the access of the rural population to vital resources such as firewood and timber for small-scale building or restoration projects. And it isn’t just about the cost: Timber for personal needs is not expensive. However, in order to buy the license to legally harvest this timber, rural inhabitants must make inquiries for several months, and it may turn out that there are not any forests in the surrounding area suitable for their personal needs because they have been rented out to businessmen who stand to gain substantially from the rent agreements.

The Russian timber industry is largely orientated towards foreign markets, especially Europe and China, and the state of these markets has a huge influence on the way things are run in Russia’s forestry sector. At the same time, the cost of setting up timber industries in Russia itself is growing at a much faster pace than it is in Europe. In 2008, prices for valuable conifer timber in Russia were comparable with the global average.

“Forests for People,” the title of the speech given by the top government official from the Federal Forestry Agency at the roundtable, has a sad irony to it. It is reminiscent of the punch line from an old Soviet joke: “We know who these people are.”