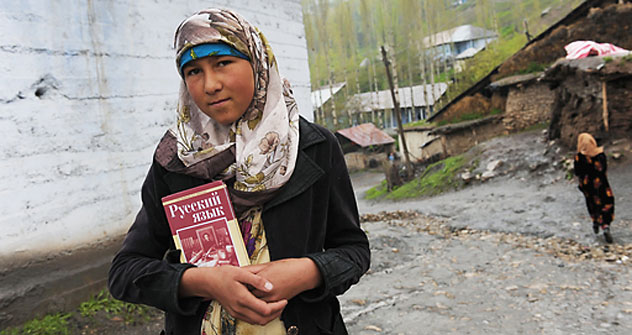 A tajikian girl holding a Russian language book on her way to school. Source: RIA Novosti

The fate of the Russian language has taken different courses in former Soviet countries since the fall of the Soviet Union two decades ago. In some post-Soviet republics, Russian is so fundamental to everyday communication that replacing it with the titular language is practically impossible. In others, removal of the Russian language from public life, including from the education system, has been a central feature of the project of independence. These processes have left many ethnic-Russians and members of other minority communities who rely on Russian stranded in the Soviet past, linguistically. In some minority regions, the axing of Russian-language education for today’s generation even threatens to leave minority populations without a lingua franca for the state.

Today, Russian is more important in some parts of the post-Soviet space than in others. The trends can be traced roughly along regional lines, but exceptions and contradictions in language use within each region, and even within each country, interrupt any neat picture. In post-Soviet Eastern Europe, for example, Belarus is still a near uniform stronghold of Russian, whereas neighbouring Ukraine’s Russian-speaking southern and eastern regions are offset by the Ukrainian-dominated west of the country. Meanwhile in the ethnically diverse Central Asian republics of Kazakhstan and Kyrgyzstan, Russian is the uncontested lingua franca, but it is heard less and less in Tajikistan and Uzbekistan. People living in countries in the South Caucasus are generally less fluent in Russian, although the language is still vital for communication with minorities. While it is rapidly disappearing from Georgia and Armenia, Russian is being replaced more slowly in Azerbaijan. The lowest post-Soviet level of Russian knowledge is in the Baltic States, where Russian looks set to disappear entirely in Lithuania in the near future, and is diminishing gradually in Estonia and Latvia.

The future of the Russian language in these countries will be determined more by where and by whom the language is used than the total number of speakers. If Russian is used in professional life, and if young people are learning the language, Russian will thrive. According to a 2008 study conducted by the Eurasian Home Russian research foundation, work and study are the key areas for Russian, and the picture is mixed. The majority of people use the language daily for work and study in Belarus, Kazakhstan, Ukraine, and Kyrgyzstan, but at the other end of the spectrum, in Georgia, less than ten percent of people use it in these vital areas of public life.

Education is central to the continuing use of Russian in the post-Soviet space, but Russian-language education has seen a rapid decline in many countries. Whereas just before the end of the Soviet Union, 39 percent of school pupils were being educated in Russian, by 1996 the number had dropped to 29 percent, and experts estimate that today’s figure has stabilized at around 15 percent. But why exactly is Russian-language education such a mixed picture in the former Soviet Union today?

Demographic necessity and political choice have both played a role in determining the different directions taken in different countries. In the Baltic States, the widely spoken and well-established titular languages were relatively easy for the governments to impose swiftly after independence, and doing so was hailed as a vital part of regaining national independence lost during the Soviet period. In the 1990s, Latvia and Estonia provoked outrage among Russians and other minority groups by making knowledge of the titular language a condition for citizenship, which left around 600,000 Russian-speaking residents of the countries without a formal status.

On the other hand, Russian is an official language in the strongholds of Belarus, Kazakhstan and Kyrgyzstan, so that all official documentation is published in Russian versions alongside titular language ones. Ukraine’s Constitution, by contrast, does not give Russian official status, despite the fact that one third of the population are native Russian-speakers.

Language policies differ between Russian-dominated Kazakhstan and Kyrgyzstan, however. In Kyrgyzstan, where Russian knowledge is widespread and most of the urban ethnic Kyrgyz population prefers to use it in daily life, Russian is dominant in public life, prevailing in politics, business and in cafes.

Kazakhstan’s government, meanwhile, caused controversy in 2006 by introducing a Kazakh language requirement for all state jobs. But it has been difficult to impose exclusive use of the titular language in public affairs, because ethnic Kazakhs themselves are more articulate in Russian and tend to see Russian as a much more useful language. To Muza Galinina, an ethnic-Russian former Almaty State University Russian literature lecturer, who today teaches Russian privately to make ends meet, the language requirement for state jobs runs contrary to both fairness and common sense. “This is simply ethnic discrimination, because there’s no way the Russian-speaking adults can learn Kazakh just like that,” she said. “Besides, Russian is still the language of culture here and the means of communication for the more than one hundred different nationalities in this country.”

Russian is set to disappear from the Baltic States entirely in the near future.

But what are the incentives for post-Soviet populations to learn Russian today? In 2006 then-President Vladimir Putin launched a six-year programme offering Russian “compatriots abroad” assistance for resettlement to Russia. The move came in response to unrest among Russian speakers in former-Soviet, neighboring countries, including Latvia, in 2005. It also aimed to deal with political pressure at home to address the marginalization of Russians abroad. Take-up has been limited, however, and moving to Russia does not seem to be a major draw for language learners. In July 2010, in a bid to stimulate Russia’s population intake, the Russian State Duma amended the earlier law on compatriots abroad, widening the definition of “compatriots” to include Russian-speaking residents of other countries. The new law offers equal rights for these “compatriots” to enter Russian universities.

A language of politics

But are university opportunities in Russia likely to stimulate a major rise in Russian-language learning? In fact, most people’s reasons for learning Russian remain closer to home. According to the 2008 Eurasian Home research, young people’s leading motivation for learning Russian today is to communicate with their Russian-speaking fellow-citizens. Only after that come international communication with neighbouring states and the potential advantages of Russian on the job market.

In fact, these domestic and international motivations are often very much intermingled in practice, as Lena, a Ph.D. candidate in history at Bishkek State University, explained. Describing educational conditions in Kyrgyzstan, she noted, “In remote regions, you’ll find more Kyrgyz-language schools, and there are also one or two universities where you can study in the Kyrgyz language. But that is not popular here because you really need Russian for the job market.” In fact, 90 percent of students in the country are Russian-speakers, and Russian is the language of communication for minority communities in the country. Lena equally emphasised the international advantage of Russian, though. “Russian-language education opens up universities in Russia and other neighboring countries to us. In a small country like ours, it’s important to be able to communicate with your neighbors.” Russian is deeply rooted here, and that does not look set to change.

Elsewhere though, politics is having a major impact on Russian language issues in the post-Soviet space. The Georgian government, for example, is doing all it can to root out the remnants of the Russian language in public life, including in education. In the context of dire relations with Russia and a stated Western orientation, in September 2010 Georgian President Mikheil Saakashvili launched a high-profile campaign to bring up to 10,000 native English-speakers to teach in Georgian public schools by 2014. The aim is for English to replace Russian as Georgia’s second language as soon as possible. Anti-Russian sentiment is widespread in Georgia in the wake of the August 2008 South Ossetia war, and many people welcome a reform they hope will bring them closer to the West. Critics remain sceptical about the relevance of English to Georgia, however, given the ongoing role of Russian as the language of communication with minority communities within the country and with people in neighbouring Armenia and Azerbaijan.

The staff of the Russian language and literature department at Tbilisi State University has been decimated since the end of the Soviet Union, amid waning student interest in Russian. And it is English, not Russian, that is being taught in Tbilisi’s burgeoning private language school sector. Ethnic Russian parents in Georgia, who themselves attended Russian schools here during the Soviet period, today tend to favor Georgian-language education for their own children, as Russian will be almost useless to them on the Georgian job market.

Ethnic-Georgian teenager Dato is in his last year at a shrinking Russian-language school in the majority ethnic-Armenian populated Javakheti region of Georgia. In theory, Russia’s “compatriot abroad” legislation should enable him to fulfil his ambition to go to university in Russia. In fact though, as his mother explains, he will struggle to make the grade for Russian university entrance. “He speaks Russian well enough,” she said, “but his writing isn’t up to standard. It’s just not possible to find decent Russian teaching out here.” With English rather than Russian on top of the political agenda, willing pupils like Dato will have less and less access to Russian.

Politics has played an important role in restraining the Russian-language in post-Orange Revolution Ukraine. At present, one third of Ukrainians are native Russian speakers, but Russian is losing ground to the titular language. Whereas 70 percent of adults in the country claim to speak Russian well, only 40 percent of children do. Former president Viktor Yushchenko opted for aggressive promotion of the Ukrainian language in public life, provoking anger among Russian-speaking groups by issuing decrees that made Ukrainian the sole language of use in state service, the courts and academia. And despite pre-election promises to make Russian a second state language, his Russia-friendly successor, Viktor Yanukovich, has cautiously passed responsibility for deciding on language use to the individual regional administrations. This regionalization of Russian will make for a patchy picture of Russian language education across the country in the foreseeable future.

Lyudmila, a university lecturer in Russian language and literature in Kiev, explained the shortcomings of Russian-language education today. “Many people in Ukraine who are willing to learn Russian can’t, because of inadequate provision in schools. In the western part of the country it can be hard to find a school where Russian is taught.” Many of these problems originate in education policies introduced to reflect Ukraine’s Western-oriented ambitions under Yushchenko. “There is one mandatory foreign language in each school, and that is one of English, French or German. It is usually up to the headmaster to decide if Russian will be taught alongside that, and even then not many hours per week are dedicated to it. Another major issue is that there are no Russian universities, just Russian departments.” Recently, there have been more signs of support for Russian-language education here, however. “Until last year there was no national academic competition for the Russian language, in 2010 we held it for the first time in 20 years,” she said.