A strategy aimed at ruining Libya 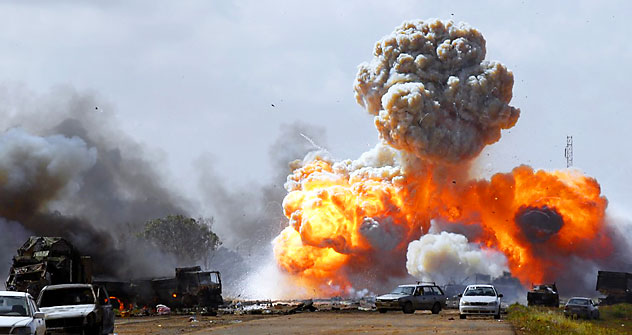 There are fundamental causes behind the strategy aimed at ruining Libya. Years ago, it was designated as a target by the architects of the new world order, and the air raids against Libya were just a matter of time.

Libya dealt the West the first serious blow on October 7, 1969 when – at the 24th Session of the UN General Assembly - it unveiled the plan to stop hosting foreign military bases on its territory. Shortly thereafter the Libyan government notified the US and British ambassadors that the corresponding treaties were no longer valid.

It came as the second blow to the West that Tripoli exerted pressure on international companies which used to maintain strong positions in the Libyan economy. The policy drew the West's ire and led the heavyweights of international politics to conspire against Libya. Securing the country's grip over its own economy was a task much more difficult than getting rid of foreign military bases. Libya's financial sector was nationalized by a government decree in 1970 as the first step. In 1973, Iraq, Algeria, and Libya put under national control their respective oil industries and, moreover, brought the nationalization issue to the OPEC agenda which it continued to top throughout the 1970ies. All foreign petroleum countries in Libya were eventually nationalized. Ironically, on the eve of the nationalization campaign Western oil grands invested heavily in Libya's infrastructures in a bid to lessen their dependence on oil supplies from the Persian Gulf area and the Suez Canal transit route.

Libya's third round of reforms – the one which hurt the interests of national proprietors - was even wider and deeper ideologically than the above two. In September, 1977, Libyan leader M. Gadhafi proclaimed economic self-governance as the overarching concept of the country's future development. Considering that at the time Gadhafi maintained close ties with J. Tito and that the Yugoslavian brand of socialism involved the reliance on self-governance as one of the key principles, it is likely that the Libyan leadership was to an extent trying to replicate the Yugoslavian model. The ideological turn set in motion the process of transferring Libyan companies under the control of their employees. Gadhafi laid out a fundamentally anti-capitalist ideological justification for the reform in the second part of his basic treatise titled The Green Book. In it, he condemned work for hire as a form of slavery and asserted that workers were entitled to own whatever they produced. According to Gadhafi, working is a natural human obligation, labor should be rewarded at the level sufficient to meet individual needs, and all surpluses should be used to amass public wealth, while the accumulation of surpluses by individuals tells on the economic well-being of others and should therefore be avoided.

Since September, 1977 Libya started implementing the “Partners, not workers for hire” concept across its economy and shortly thereafter moved on to put into practice the concept that housing should be owned by residents. In May, 1978 Libya passed legislation which outlawed renting out apartments and turned those who formerly rented apartments and homes into their owners. In contrast to the post-1917 Russia and the post-war East Europe, the nationalization in Libya was not tantamount to expropriation as former proprietors received compensations and were invited to take part in running the nationalized assets as partners. Nevertheless, the reform left the upper and middle strata of Libya's proprietors who perceived the nationalization as seizure bitterly discontent. A faction of Muslim clerics also voiced opposition to the Libyan leadership's economic reforms.

The resistance to reform was actively supported by external forces and Gadhafi narrowly escaped several attempts on his life, but the process of change in Libya went on. All of the country’s people used to make a living sufficient to meet their basic needs, food prices were subsidized, public transit and gasoline were practically free, and free housing was fully available.

The Libyan government's efforts to create an alternative – non-capitalist and non-liberal – development model known as The Third Universal Theory also prompted external forces to start putting together a strategy aimed at destroying Libya. The fundamentals of the theory as presented in Gadhafi's The Green Book which he wrote in 1976-1979 were actually put into practice. Jamahiriya, a system of direct popular rule modeled on the democracy of the antiquity epoch, is based on three principles:

1.    The population should directly exercise administrative functions via popular assemblies which open to everyone access to decision-making;

2.    The people are entitled to share ownership of the public wealth.

3.    Weapons should be supplied to the population to put an end to the army's monopoly on arms.

The very concept of Jamahiriya was an offense to the West's allegedly superior liberal democracy which the West invariably imposes on the countries it occupies and subdues. Importantly, Libya – unlike quite a few of the developing countries – was a real success story as the statistical data clearly demonstrates. On the eve of the outbreak of violence last February, Libya's per capita GDP in terms of the buying parity measured $13,800, more than twice that of Egypt and Algeria or more than 1.5 times that of Tunisia. Libya has 10 universities and 14 research centers, and its schools, preschools, and hospitals are maintained at the world-class level. Libya ranks first in Africa in human development with the average life expectancy making 77 years (for comparisons, in Russia the average makes 69 years). Libya is mentioned in The Guinness Book of Records as the country with lowest inflation level – just 3.1% over 2001-2005. The list of advantages of the Libyan type of socialism is long and impressive. It is worth noting that in Libya the human rights – if those should be understood as an individual's right to decent living conditions – are implemented to a much greater extent than, for example, in Russia, Ukraine, or Kazakhstan. In any case, it was not concern over human rights that prompted the West to undermine Libya's political regime.

The Libyan leader's September, 2009 speech at the UN General Assembly must have been another reason why the West is seeking to topple Gadhafi and to erode Libya's sovereignty. Having taken 75 minutes instead of the apportioned 15, Gadhafi directed biting criticism at the world's major powers which he charged with de facto racism and terrorism, and even described the UN Security Council as a council on terrorism. With the UN Charter in hand, Gadhafi stressed that according to the document military force can only be used given the consent of all UN member countries and invoked the fact that since the UN came into being powerful countries had waged 64 wars against smaller peers, while the UN did nothing to prevent the aggressions. Gadhafi also expressed the view that the Talibs had the right to establish a Muslim emirate and advocated the rights of the Somali pirates asserting that the countries using the Somalian territorial waters were perpetrating the actual acts of piracy. Gadhafi further claimed that G. Bush and T. Blair were personally involved in the execution of S. Hussein and finally said it was the West who bred Hitler, persecuted the Jews, and bore the responsibility for the Holocaust. No doubt, the West never forgot the slap in the face.

And still, Libyan vast energy reserves are likely to be the main reason why the country's sovereignty is facing a death sentence. I am convinced that, moreover, the priority behind the spill of Jasmine revolutions over the Arab world was the demise of Libya.

In 1988, the year of the latest oil field discoveries in Libya, its reserves – the world's greatest at the time – were reported at 3b tons of crude oil. Libya's richest oil fields – Sarir, Nafoora, Raguba, Intisar, Zelten (also known as Nasser), etc. - are located south of the Gulf of Sidra and linked to the coast with pipelines. Oil is exported via five tanker terminals sited at the Mediterranean seaports of Es Sider, Ra's Lanuf, Marsa Brega, Marsa El Hariga, and Ez Zuetina. Libya also sits on Africa's third largest reserves of natural gas totaling 657b cu m. The biggest gas field Hateiba contains 339b cu m of gas, and previously unexplored gas reserves were found in the Sirte Basin in the 1990s.

Russia whose interests will be affected as a result of the attack against Libya clearly factors in the West's economic reckoning. In fact, Russia already counts considerable losses. Arms deals between Libya and Russia worth $2.2b and $1.3b were signed in 2008 and 2010 respectively but evidently will not go through. Several other contracts between the two countries were in the making at the moment when the international sanctions were imposed on Libya. Libya was expected to buy 12 Su-35 multi-purpose fighters, 48 T-90S tanks, a number of S-125 Pechora, Tor-M2E, and S-300PMU-2 Favorit air defense systems, Kilo 636 diesel-electric submarines, etc. Russia planned to supply to Libya components and maintenance services to modernize its parks of Russian-made Osa-AKM air defense systems and T-72 tanks. The Russian military-industrial complex thus lost revenues in the amount of around $4b. Besides, Russia annulled Libya's Soviet-era debt – a handsome $4.6b - in return for an array of electric power, construction, and defense contracts, and the amount should be bracketed with Moscow's losses along with the blown contracts signed by Russia's Gazprom, Railroad Company, and telecom sector.

Japan's drama is sure to bear an adverse impact on the future of the nuclear energy, thus highlighting the importance of the traditional hydrocarbon fuels. In this light, the hypothesis that the Fukushima 1 catastrophe contributed to the West's decision to boost anti-Libyan activities seems fairly realistic. Gadhafi's not giving in to pressure, in contrast to the former leaders of Egypt and Tunisia, derailed the West's scenario for Libya, but of course the country remained a target.

UN Security Council Resolutions 1970 and 1973 reflected more than just violations of the long-dead international law. They showed the chaos-control ideologists' unwaivering determination to ruin Libya. The question arising under the circumstances is: in the world of today, where force prevails over right, are there healthy political forces capable of preventing the devastation of yet another stable and prosperous country? I do believe that such forces exist. First of all, they are represented by the countries which did not prop up Resolution 1973 in the UN Security Council, namely Brazil, Germany, India, China, and Russia. However, abstaining during the vote is a half-measure as the situation calls for serious and immediate response. At the moment the media including the Internet are showering the audiences with arguments in favor of the offensive against Libya, while the voices of the opponents of the aggression are barely audible.

My view is that the condemnation of all aggressions by the Russian leadership and a call for an immediate international conference or a summit of the world's major powers can help promote a peaceful resolution in the case of Libya. If Russia's Western partners reject the initiative, at least their position will expose the true intentions of the proponents of intervention in Libya and enable even Gadhafi's staunch opponents to see with utmost clarity the true objectives of the mission they are offered to join. The current blueprint for Libya resembles closely the scenarios that culminated in the fall of Yugoslavia and the establishment of the Kosovo quasi-state as well as in the devastation of Iraq and Afghanistan. Practically any of the world's countries having attractive natural resources or not abiding by the West's liberal models is confronted with the risk to be next on the hitlist if the global majority fails to get heard and the powerful countries from the ranks of the opponents of the offensive against Libya lack the much-needed resolve. Shall we wait under the circumstances?