A war to save face 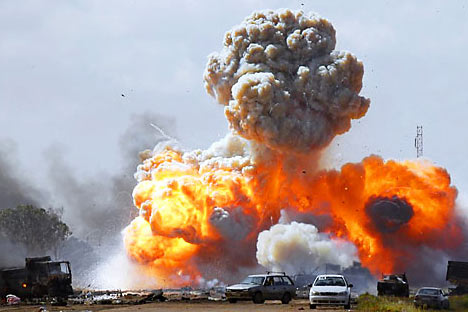 Vehicles belonging to forces loyal to Libyan leader Muammar Gaddafi explode after an air strike by coalition forces, along a road between Benghazi and Ajdabiyah. Source: Reuters / Vostock Photo

The leaders of the coalition engaged in air strikes over Libya jumped into a military operation to overthrow pesky Muammar Gaddafi without considering the risks.

Based on public statements made since the armed conflict between the Libyan army and the rebels began, it is possible to draw the conclusion that the West (along with some countries from the East) has now initiated a military campaign for the sake of saving face. Political leaders and foreign ministries have already managed to shovel dirt on Gaddafi’s grave on multiple occasions, as they obviously expected the opposition to claim victory as quickly as it had in Tunisia or Egypt. Once it became clear that the opposition was retreating, help had to be provided whether anybody liked it or not. The campaign was initiated by European governments that wish with varying intensity to strengthen their positions in the world, regulate migration from the Middle East and resolve internal problems. The United States ended up getting drawn into the process.

Russia took two significant positions right away. First, it abstained from voting on Resolution 1973 in the UN Security Council. Second, it called for not using force. So, Russia’s position seems to be to let the coalition fight and Moscow will complain about the civilian casualties. Saving face in this manner could probably be described as dynamic.

It was surprisingly simple to unleash a war in the modern globalized world; it seems that nobody is taking into account the controversial outcomes of the Yugoslav, Iraqi and Afghan campaigns. By attacking Gaddafi, the coalition is not standing up for the people; rather, it is defending the rebels, even though nobody yet has a clear idea of who they are and how they will behave if they emerge victorious. And there remains the question of if they will be victorious at all. Admiral Mike Mullen, chairman of the U.S. Joint Chiefs of Staff, has admitted that the military operation in Libya could grow into another deadlocked standoff.

And it doesn’t appear that anybody has thought about how the war will impact the global economy.