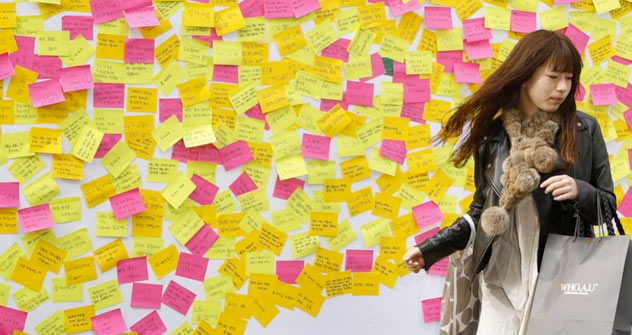 Russians living in Japan write about their experiences in the aftermath of the devastating earthquake and tsunami.

Svetlana, Tsukuba: I was riding my bike home from work. At first, I thought I’d hit a rough patch in the road, then what seemed to me a bumpy ride turned into swaying. Startled, I braked hard. I noticed that Japanese car drivers were slowing down, too, and the traffic lights went out. And then all hell broke loose. There were no buildings close by, but trees were shaking fiercely. Poles and traffic lights, too. By observing them, I realized subsequently that there were more aftershocks.

Inga: The earthquake struck the Niigata prefecture at night, some 250 kilometers from where we live. And then we woke up to our mobiles making awful sounds; I cannot even begin to describe the grinding noise. I nearly flipped over! It rurns out it was a text message from civil defense, announcing that the epicenter was at Tochigi and it was sounding an alarm to wake people up and warning them to be ready to evacuate their homes. At five in the morning, the mobiles squealed once again, with the same message. Such an alarm is absolutely guaranteed to wake you up, and I worry about people I know who can’t read Japanese: Imagine receiving a text message, accompanied by a siren, with a red sign of a running person and the single English word, Earthquake.

Svetlana Tsujimoto, Principal of a private English language school in Tokyo, currently in Hamamatsu (425 kilometres from Fukushima): Express train services in Tokyo have been suspended because of the earthquakes. Buying groceries is a huge problem. There was no panic yet on Saturday, but on Sunday the stores were swept clean: no toilet paper, napkins, batteries, bread, flour, rice. People lined up half an hour before the stores open and stocked up on batteries because there are district-by-district blackouts in Tokyo. When we left Tokyo, we had half a tank of gas, and we filled up on the way. There’s still gas in Hamamatsu, but in Tokyo, almost all gas stations are closed.

Inga: I’d like to write something about normal, everyday life. There’s nothing much happening in our neck of the woods; there’s no rush to buy groceries and people are going about their daily routine. But because of what’s going on elsewhere in the country, this no longer seems like it used to, and it’s hard to relax.

I heard that many Tokyo residents keep an emergency grab-bag at home containing important documents, a stash of money, some medicines, and some food and water. Whenever a strong quake hits, they grab it and head for the door. Safety rules are broadcast: don’t go near the shore and, if you are in a vulnerable area, climb at least to the third story of a concrete building. I remember that, when I lived in Shkotovo-22 as a child, a tsunami alarm sounded. And our neighbors from upstairs and went to cook the rabbits they kept on their balcony – before they perished.

Maria: It’s been sort of a lull for the second day in a row. Today, it’s better somehow, but yesterday it was more tense. Yesterday, I was sitting and thinking whether I should get a ticket on the first flight back to Moscow or whether I could wait some time longer. Will I come home all glowing from radiation, or will it blow over?

Overall, people have become sort of kinder. Or I’ve simply been lucky. Many people smile, foreigners say hello. An old man at the store talked to me: “Can you imagine, they’ve sold out, there’s nothing left, nothing left.” Taxi drivers talk to me.

There’s actually more people wearing face masks – they must believe this helps against radiation. On the other hand, many people wear masks normally around this time of year – they suffer from kafunsyo, a sort of allergy.

Olga, Yokohama: Rescuers from South Korea, Germany, and the United States. are working in disaster areas. People left homeless have been housed temporarily in schools and meeting halls; they are given blankets, hot food, and medical assistance.

In areas left without electricity, big batteries have been placed near supermarkets so people can recharge their mobile phones. Foreigners are amazed at the absence of looting; nobody is stealing goods from the shelves or from destroyed stores; instead, everybody lines up to buy the necessary batteries, flashlights, water, and food.

Roman Afanasyev, Tokyo: In general, the Japanese amaze me with their organization and samurai calm. Chibu was shaken a couple of hours ago. I went to the store across a small park. People are relaxed, some are sitting on benches and chatting, some are fishing, a family is eating snacks. If I didn’t know what was going on up north, I would never have believed that there was a catastrophe unfolding in Japan. And most importantly, the people’s faces show no panic, no fear, no emotions whatsoever – only calm. As always.

I am surprised by and respect their calmness. More than once I have been in disaster areas in Russia and saw people become hysterical in even less serious situations. There’s been a terrible catastrophe here, but people are composed and not panicking. I was on a commuter train in Tokyo yesterday when the earthquake struck. The train stopped at a station. I was napping. Strong underground tremors trigger a text message on mobile phones. The phones start emitting a shrill sound. There were about 25 people in our wagon. Half of their phones emitted an alarm signal. I opened my eyes, pulled out my mobile and read the message. Niigata was shaking. The wagon was swaying. I glanced at people’s faces. Some were sleeping, some were reading books, but nobody rushed for the exit. They were waiting patiently for the shaking to stop and for the train to continue moving. I simply do not know how to explain the Japanese people’s behavior in such emergencies. This nation is simply totally different.

Svetlana Tsujimoto: We are waiting to be evacuated. We are staying at a hotel in Hamamatsu. We left Tokyo on Monday, after the second explosion. I had my suitcases ready by then; I quickly loaded them into the car, picked up my mother-in-law, my husband, and my two-year old, and we drove south. But we only went 100 kilometers, because it’s very hard to travel with a baby. There were already no vacancies in cheap hotels, because the Japanese are moving south, and we had to take a room at an expensive hotel.

The system here is that, if you come to work in this situation, you do the right thing. If you fly south, as we did, you’re a coward and you’re good for nothing. But many leave just the same. The authorities cannot allow everybody to skip work, otherwise the economy would suffer tremendously. But many companies make concessions. The company my husband works for suggests that employees go south and work remotely. But my father-in-law will have to report to his workplace tomorrow after a break of several days – he can’t work this way.

The excerpts were taken from the following blogs: