Science at your fingertips 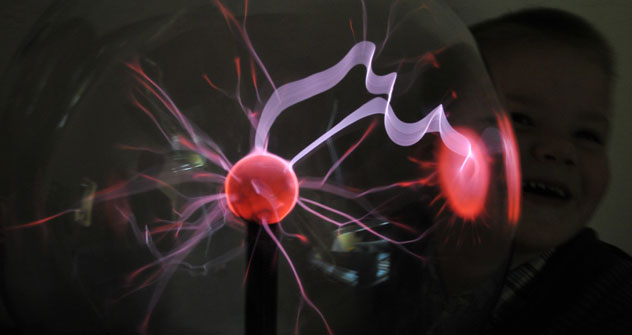 Moscow’s first interactive museum may be aimed at children, but has developed a fan base well outside its intended demographic.

What’s inside a black hole? How does a tornado form? How does an internal combustion engine work? And in general, what makes the world go round? Parents of Moscow’s schoolchildren and preschoolers no longer have to search for answers in textbook reference guides. All they need to do is head to the Experimentanium, the capital’s first interactive museum.

A man cautiously and embarrassingly sits down on an unstable-looking chair. His 10-year-old son effortlessly pulls a rope tied around the chair’s legs, and the astonished parent lifts off on an improvised elevator to encouraging cheers from onlookers below. This experiment, which teaches students how pulleys work, is much more exciting than a physics textbook.

In today’s children’s museums, conventional displays have given way to a new format. The previous don’t-touch-follow-the-guide type of museum has become a hands-on fully interactive experience. At the Experimentanium, visitors are met at the door by two amusing robots that have already become favorites of the preschool crowd. It’s no wonder: These clumsy creatures, resembling giant vacuum cleaners, can maintain a meaningful conversation, ask questions and even get angry at somebody who is in their way. “Move away, sweetie,” one irritated robot droned at a little girl.

“I have many friends with kids ranging from three to 10. At a certain point we realized that it would be great to have a place for kids not only to have fun but also to make discoveries and learn something new,” said Natalia Potapova, the Experimentanium’s general director. “As we were planning to open such a museum in Moscow, we visited several similar museums in the United States, United Kingdom and Denmark. European interactive museums tend to emphasize the gaming component over educational. Our exhibits are more of a didactic nature. Our main task is to show children through visual experiments how the laws of nature work,” said Potapova.

A large warehouse tentatively divided into six areas—anatomy, mechanics, optics, acoustics, electric magnetism and cars—contains more than 200 unusual exhibits. These are in addition to a very real chemical laboratory where experiments can be performed under the guidance of instructors, and a lecture hall where educational films are shown.

In the middle of the hall, two men lean over a magnetic puck suspended between copper plates; a group of teenagers nearby watch with suspicion as an iron cone, all by itself, without any external input, and seemingly against all laws of physics (but in fact, because of them) climbs up upon tilted metal rods.

“Moscow is a city of museums, and we wanted to create something entirely new, a place that would be interesting for the entire family. Every child or parent can touch, spin, or press the exhibits as much as they like,” said Potapova.

Enthusiastic young visitors test the durability of each interesting object. They can turn over a glass-covered board with faience plates to see which one will be the first to hit the bottom. The force of friction in action!

“Dad, come out! You’ve been sitting there for half an hour already,” a student begs his father, who can’t seem to get enough of sitting behind the wheel of a giant semi-truck like the one in Coca-Cola’s holiday advertisements. Lovingly nicknamed “Fred,” the truck came from the United States. Anyone can climb into its sleeper cabin and feel like a real teamster.

“We manufacture the exhibits ourselves, and 80 percent are Russian-made. The rest need to be ordered from abroad. Our partners include San Francisco’s Exploratorium,” said Potapova. “We try to maintain close ties with our colleagues in cities such as Irkutsk and St Petersburg, where a similar museum, called the Labyrinthium, already exists.”

“Why weren’t there such museums when we were kids?” said a visibly excited man called Andrei, who was visiting the museum with his son. “I saw a similar exposition in Finland, and although there were more exhibits there, my son still loves it here – the toys are fantastic.”

Although museums are generally considered to be unprofitable enterprises and few can afford to exist without sponsorship or government support, Potapova is optimistic: “The Experimentanium is a totally private initiative. My three partners and I invested our personal money in its development. Unfortunately, sponsors have shown no interest so far. But we plan to cooperate with the Ministry of Education. That’s an unwieldy bureaucratic structure, and decisions are made slowly.” She pauses for a second before adding: “I am confident that the best part is still to come. We have plans for opening similar museums in other Russian cities.”