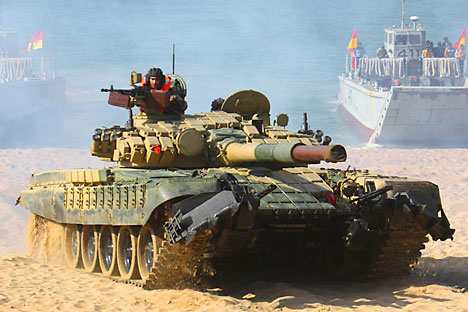 Russia’s defense sector may be losing a partner in Muammar Gaddafi, but it may gain other opportunities.

Russian President Dmitry Medvedev has issued a decree banning Libyan leader Muammar Gaddafi, members of his entourage and relatives from entering Russian territory or transiting through it. During the Mar. 17 vote at the UN Security Council on introducing military sanctions against Tripoli, Russia abstained, but earlier President Medvedev ordered sanctions against the Libyan government. The document, passed pursuant to the UN Security Council resolution 1970 of Feb. 26, forbids government institutions, industrial, trade, financial and other entities from exporting any types of weapons and weapons-related assets from the territory of the Russian Federation to Libya.

The president also banned any services to Libya involving the training of military personnel and the provision of technical, financial and other assistance that may be connected with combat activities or the use of military goods. The customs authorities at ports and airfields have been ordered to thoroughly inspect all cargo bound to or from Libya, and should any banned good be found, to confiscate them with all the consequences that entails.

Some experts claim that such harsh restrictions on Russian military supplies to the Gaddafi regime may cause $1.8 billion in damage to the Russian defense industry and entail $4 billion in opportunity costs. However, Anatoly Isaikin, the head of Rosoboronexport said that it is too soon to count losses. Moscow has yet to receive advance payment for its defense supplies to Tripoli, contracts are not yet being implemented, and until the outcome of the Libyan stand-off is known, it is premature to speak about missed opportunities. The new authorities, whomever they may be, may choose not to break off the former agreements since any government needs modern weapons and combat supplies for its army purchased according to a cost/benefit analysis.

And, according to these criteria, Russian defense goods are quite competitive, especially in North African countries. Additionally, Russian military exports have no political strings attached.

According to The Military Balance report published by the London International Strategic Studies Institute (ISSI), at the start of the conflict the Libyan forces had have about 2,000 Soviet-made T-72, T-62 and T-55 tanks, of which only 200 are more or less modern T-72s. They have no more than 450 Russian and Western-made 122mm, 152 mm and 155 mm howitzers and some Grad multiple rocket launchers, 770 fighting vehicles and armored personnel carriers M-113 and BTR-60, also Western and Soviet-made. Of air defense systems, they have Shilka self-propelled ZSU 23x4 anti-aircraft guns and anti-aircraft missiles Osa, Kub and Dvina. But the regime’s main strike force is its fighter and assault planes, the French Mirages and Soviet Mig-25, Mig-23, Mig-21, Su-24 fighter planes, American CH-47 Chinook and Russian Mi-17 and Mi-8 helicopter gunships. Gaddafi is using this weaponry against the opposition, which is now being supported by airstrikes from American and European forces.

Experts believe that even if an anti-Russian opposition comes to power in Tripoli, it would not be able to replace all its weapons with Western-made equipment overnight and it will have to turn to Moscow. That could mean very real earnings for Russian defense enterprises—depending on how much of the Libyan armed forces are destroyed in the coalition airstrikes.