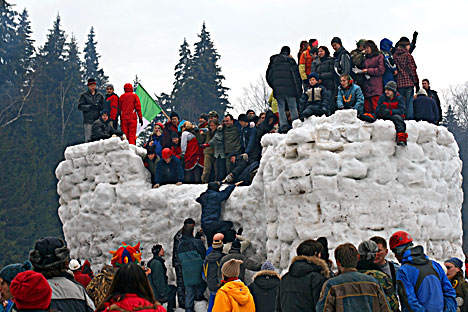 A Snow Fortness attack during the Maslenitsa festival

A joyous profusion of colours, a carnival-like spirit of celebration, the spirit of wild abandon and the smell of spring and summer in the air after a long winter. This festival of gaiety is called by various names in different cultures: it’s Maslenitsa in Russia and in India it’s called Holi.

Maslenitsa, like Holi, is deeply rooted in the ancient past. Maslenitsa is an ancient pagan Slavic festival that has survived through more than a thousand years of Christianity. Originally, it was connected with the spring solstice, but when Russia adopted Christianity, it became the moveable feast that precedes Lent.

In many countries, the approach of spring, the awakening of nature and hopes for a new good harvest, symbolised the dawn of the New Year that called for cheer and celebration. It would be difficult to find two more different festivals in their outward trappings, but at the same time kindred in spirit. The key word for these festivals of spring is “merriment”. The Russian Maslenitsa lasts an entire week, but the most important celebration and the final seeing-off of winter always take place on Sunday. After that, spring is officially here; it makes no difference that outside the temperatures are still below freezing and that the snow may not be entirely gone until May. The Russians recognise spring in subtler signs in the smell of the wind, the shape of the icicles, the return of birds from warmer climes.

People have always thought that the best way to say goodbye to the old is to consign it to the flames or to the waves. Maslenitsa includes the burning of an effigy. This effigy, from which Maslenitsa derives its name, has the pleasing appearance of a young girl with pink cheeks, a long braid and a pretty dress under which is hidden straw. In Russian villages, this straw girl traditionally stood on the highest ground throughout the week of Maslenitsa, observing the villagers’ boisterous merry-making with a smile. And then on Sunday, having all said their goodbyes to the winter, the villagers burned the effigy while singing and dancing.

The carnival-like spirit of letting oneself go cuts across both Maslenitsa and Holi. By changing one’s appearance, according to folk belief, one also changes one’s essence, and this allows one to give oneself over entirely to this festival. If in India people sprinkle each other with coloured powders and painted water, then in Russia and many other countries, the distinguishing feature of this festival is people in masks dressed up as gypsies, bears and various evil spirits. In the mythic-religious sense, Holi in India symbolises the triumph of the good over the evil.

During Maslenitsa, a feigned war is waged. For example, a battle for a snow fortress is organised. Everyone helps build the fortress, then they split into two teams: the invaders and the defenders, who allow themselves to be defeated. The main weapons, besides their own hands, are snowballs. In olden times, the construction of the fortress was taken more seriously, the building often began at the beginning of the winter with the first snowfall. And only men were allowed to storm the fortress, because in this battle-for-fun, one could wind up with serious injuries. Another traditional and purely masculine entertainment was the “wall-to-wall” fist fights. Two teams strip to the waist, and, at the signal (a loud hollering from the crowd of onlookers), go running straight for each other and pummel their opponents till they gave in. Foreigners are usually shocked, but Russians like this sort of thing.

But not all activities involve a dose of well-meaning aggression. Sledding down icy mountains, rides in sleighs and on carousels, tugs-of-war, balancing on ice-covered logs. In the villages they built bonfires and threw old clothes and kitchen utensils into the flames also take place. They erected a tall post with a wheel at the top to symbolise the blazing sun. Presents and prizes were hung from the wheel and the young people amused themselves by trying to shimmy up the icy pole and get them.

Maslenitsa, like any Russian celebration, cannot do without drinks. But vodka is not quite the vintage drink for these revelries. Maslenitsa is far more ancient and the traditional drink at this time is mead, an alcoholic drink made with honey, sometimes with the juices of berries thrown in. The main fare at Maslenitsa is bliny (plate-sized pancakes) — yellow and round, like the sun. The last day of Maslenitsa is Shrove Sunday (Forgiveness Sunday) when one traditionally asks all one’s friends and family for forgiveness for any past offenses, and they usually say in reply: “God will forgive you!”