A feeling of flight 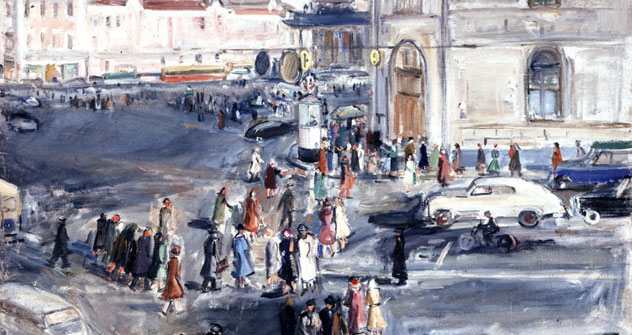 An exhibition to mark what would have been Alexander Labas’s 110th birthday opened Mar. 15 at the New Tretyakov Gallery in Moscow.

One of Russia’s leading artists of the 1920s, he fell into obscurity in the 1930s like many other post-revolutionary artists who did not adapt their works to Communist party guidelines. Along with other painters working in the years immediately after the revolution, Labas set out in search of a new way of artistic expression.

In the 1930s, he was accused of “formalism.” When the Russian avant-garde style came into fashion in the 1960s with the backlash against socialist realism, Labas’s work got a new look. Labas lived a long life, passing away in 1983 just before Perestroika began, but his style changed little from the 1920s.  Because the artist often painted whole series devoted to the same topic, the Tretyakov exhibition is structured along several themes:  air navigation, trains, revolutionary romantics and wartime Moscow.

Labas’ works from the 1920s and early 1930s have titles that speak for themselves: “High altitude,” “Airplane passengers,” “A blimp and an orphanage” and “In an airplane cockpit.” Like many of his contemporaries in Russia, Europe and the United States, Labas was intrigued by aviation.

Unlike many other painters, however, he focused not so much on technology, equipment and machine-like forms as much on the feeling of flight—the state of a man who feels free, happy and easy in the air. The exhibit runs until May 18.