Russia’s response to the Libyan crisis: a paradigm shift? 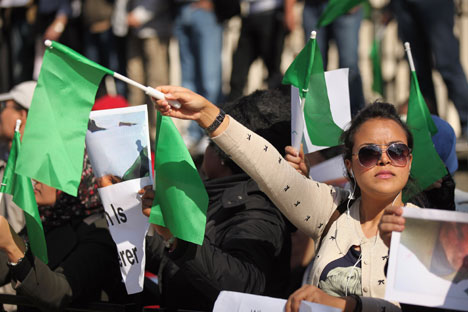 Supporters of Libyan leader Colonel Gaddafi protest opposite Downing Street against the military action taken by the UK, USA and France against Libya on March 21, 2011 in London, England. Source: Getty Images

What does Russia's divergent response to international action in North Africa say about future foreign-policy choices in the region?

The rapidly changing situation in North Africa and the Middle East (the NAME region) has presented Russia with a number of difficult foreign policy challenges.  Russia’s early reaction to the crisis in Libya has not only confused observers, but also allowed them to talk about a split within the country’s top leadership.  Yet, hopefully, in the end, a more mature—and ultimately more effective—Russian policy in the NAME region will emerge.

Last Friday, the U.N. Security Council adopted Resolution 1973 establishing a no-fly zone over Libya.  Many foreign policy experts expected Russia, a permanent member of the Security Council, to veto the resolution on the grounds that it will be used as a pretext to a full-fledge military operation against the regime of Col. Muammar Gaddafi.  Despite these expectations, however, Russia didn’t veto the resolution, choosing instead to abstain.  But, when the air forces of a hastily created international coalition began bombarding military objects in Libya, Russia condemned the actions, citing attacks on “non-military” targets and numerous civilian deaths.

Some Russian analysts found the country’s behavior illogical.  They argued that if Russia wanted to preserve its substantial economic interests in Libya (worth, according to some estimates, about $70 billion), it should have sided with the presumed eventual winner in the conflict, the “rebels,” and voted for Resolution 1973.  If, in contrast, the Kremlin believed that Gaddafi could survive the military assault, then Russia should have vetoed the resolution and helped Gaddafi.  By abstaining, Russia alienated both sides in the conflict.

The feeling that something went wrong in Russia’s foreign policy decision-making process was exacerbated by the rumors that President  Dmitry Medvedev originally wanted a vote in favor of the resolution, whereas the Foreign Ministry strongly insisted on vetoing it, so that the decision to abstain was a compromise.  In a sign of a tension between the Kremlin and Smolenskaya Square, President Medvedev abruptly fired the Russian ambassador to Libya, Vladimir Chamov, for the “misrepresentation of Russia’s position in the Libyan conflict.”  (Chamov reportedly criticized the president for deciding not to veto the resolution.)

And then, Prime Minister Vladimir Putin chimed in.  During a visit to a major arms manufacturing plant in Udmurtia—and surrounded by a crowd apparently upset that the fall of the Gaddafi regime would result in the cancellation of lucrative weapons deals—Putin called Resolution 1973 “moronic” and likened it to a “medieval call to crusade.”  A few hours later, Medvedev called his prime minister’s statement “inadmissible.”  On Wednesday, the State Duma sided with the president by issuing a statement supporting Russia’s position vis-à-vis the resolution.

A number of arguments can be put forward in defense of this position.  Two of them look especially relevant.  First, Resolution 1973 was adopted on the eve of an imminent attack by Gaddafi troops’ on Benghazi.  If Russia have vetoed the resolution and the attack had taken place in the absence of a no-fly zone, all the moral blame for the inevitable—and inevitably exaggerated by the Western media—collateral damage would have been put on Russia’s shoulders.  In contrast, with Russia on the sidelines, the responsibility for the civilian deaths rests with real culprits: the Gaddafi regime, the “rebels”, and the international coalition forces.

Second, vetoing the resolution would seriously undermine the ongoing Russia-NATO dialogue.  At a time when the partnership’s most important national security issue—European missile defense—is being actively discussed, the last thing that Russia needs is a new chill in its relations with NATO countries.  Russia simply doesn’t have so much at stake in Libya, arms sales to the Gaddafi regime notwithstanding, to risk finding itself on the periphery of the missile defense discussion.

From this point of view, Russia’s decision not to veto Resolution 1973 was a vintage example of  the pragmatism in foreign policy the Russian leadership seems to be so fond of.

And yet, reading President Medvedev’s Monday statement on Libya, the impression is that something else was on his mind.  Medvedev accused the Gaddafi regime of “crimes committed against its own people” and directly linked its “abhorrent behavior” to the trajectory of Russia’s UN Security Council votes: its support for the earlier Resolution 1970 and its refusal to veto Resolution 1973.  In other words, by taking into account the domestic conduct of the Libyan leadership, Medvedev in essence rejected the simplicity of “realpolitik” and introduced elements of a value-based approach that until now has been completely foreign to the Kremlin.

Only time will tell whether Medvedev’s Libya statement was a reflection of his foreign policy philosophy rather than an emotional one-off.  But for now, Russia needs to act.    Another Western military adventure in the Arab world provides Russia with an opportunity to increase its influence in the NAME region.  To this end, Foreign Minister Sergei Lavrov’s visits in Egypt, traditionally the most influential country in the Middle East, and Algeria, Russia’s major partner in Africa, are timely efforts to fill the vacuum left by the inconsistent policies of the Obama administration.  Equally strategically important were Medvedev’s recent meetings with Mahmoud Abbas, the president of the Palestinian National Authority, and Israeli Prime Minister Benjamin Netanyahu, which were aimed at implanting Russia into the core of Israeli-Palestinian conflict management.  And not to be missed is Medvedev’s shrewd decision to appoint highly respected diplomat and parliamentarian Mikhail Margelov as the president’s special representative in Africa.  (Medvedev has also created and filled the position of special representative in Afghanistan.)

Signs are that Russia is returning to the Muslim world in full force.  Perhaps, even in style.