From oil tycoon to imprisoned muse 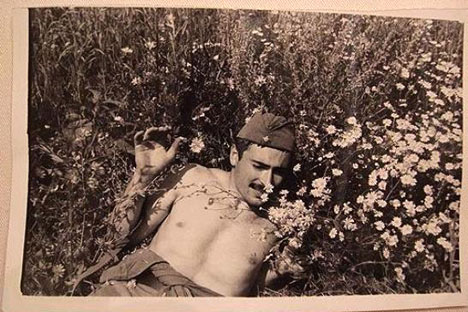 Screenshot from the movie

Directors and writers have turned their eyes to former oligarch and longtime inmate Mikhail Khordokovsky as a subject, inspiration, and more recently, colleague.

During the first few moments of the movie “Khodorkovsky,” the screen remains black. Then a narrow blue band widens from the top edge of the inky darkness, as if the viewer is peering out at the clear sky from some dark chamber. The vista grows, revealing two oil pumps swinging up and down in the middle of a snowy desert in Siberia. They look like the hands of a huge clock, ticking off the inevitable minutes.

The film, which was a sleeper hit warmly received at last month’s Berlin Film Festival, got much bigger play after it was stolen from the director’s office before a small screening, causing an even greater sensation for the film.

It has been seven years and four months since the richest man of Russia, oil tycoon Mikhail Khodorkovsky, was arrested in Novosibirsk airport for fraud, after becoming involved in a public conflict with then-President Vladimir Putin. His fate has intrigued creative minds and intellectuals all around the world, including the creator of the Khodorkovsky film, German director Cyril Tuschi.

Long-term imprisonment has turned Khodorkovsky from a Russian businessman, one of many, into an iconic subject and archetypal figure for today’s literary giants. While many of Russia's oligarchs ignored or broke poorly enforced laws to amass their riches in the 1990s, only Khordokovsky was arrested for fraud, his advocates say, because of his growing interest in the political opposition movement.

Fate has also transformed this onetime oligarch into a philosopher and writer; he has been accepted by Russian artists not only as a subject, but as a colleague. His prose, published in glossy magazines, a few opposition newspapers and available on the Internet, explores the meaning of justice, the decay of corruption and the demonstration of stamina and at what seem to be hopeless moments.

As he researched his documentary on Khordokovsky, Cyril Tuschi spent five years traveling and speaking to Russians and ultimately reflecting on the man who appears oddly serene in a glass cage at court hearings in Moscow. The director said he is “overwhelmed by the aura of a martyr” surrounding Khodorkovsky. Tuschi traveled to Moscow, London and Israel to interview former colleagues and friends; to New York to meet his son, Pavel, and to Chita, the remote Siberian town where Khodorkovsky is imprisoned, to interview inmates.

The German documentary was released soon after a Russian court sentenced Khodorkovsky and his business partner, Platon Lebedev, to six more years in prison. The trial added to the relevance of the recent proliferation of Khodorkovsky-themed literature and art. In Russia, where history is saturated with stories of political repressions, exiles and arrests for several generations, many writers have personal associations and motivations for getting involved in or staying out of politics.

The Samizdat movement establishing itself among dissident writers and poets in the late 60s and early 70s was a literary genre formed in reaction to the return of repressive policies of the Stalin era, after Soviet leader Nikita Khrushchev’s death.

For acclaimed Russian novelist, Lyudmila Ulitskaya, Khodorkovsky’s fate has renewed this tradition. Last September, in fact, Ulitskaya and Khodorkovsky jointly received a literary prize for their series of letters to each other, while Khodorkovsky was in Chita. They were accepted as a work with literary merit, and published in the Russian Znamya monthly.

Excerpts from the Ulitskaya and Khodorkovsky letters were also published in independent newspaper Novaya Gazeta: Ulitskaya’s grandfathers spent more than 20 years in jail between them; her friends from the Sixties were imprisoned as well. She approached Khordokovsky as a subject emblematic of the throes of Russian society and an archetype of its literature.

One of the most published Russian writers, Boris Akunin, once compared  Khodorkovsky’s imprisonment with Andrei Sakharov’s arrest and exile in Gorky, now Nizhny Novgorod in 1979. Nobody then would believe in positive changes in the U.S.S.R., where an academic was kept in exile, the writer recalled. But the moral resonance of the story – the inventor of the Russian hydrogen bomb turned opponent to the superpower he helped create – eventually could not be ignored. All it took was one phone call from general secretary Mikhail Gorbachev to Gorky for people to believe in the fresh wind of change.

“Until Khodorkovsky is out of jail, all the beautiful words about civil society, independent courts and the struggle against corruption will be taken as empty,” Akunin said.

Soon after 22 months of hearings, the court’s new guilty verdict and multiple detentions of Khodorkovsky supporters, the most famous Russian prisoner had his own literary debut, a collection of his articles, interviews and dialogues.

Back in the 1990s a popular satirist and playwright Victor Shenderovich associated Khodorkovsky with a long list of Russia’s richest men. “As soon as he went to jail, his real fate began to lead him. Today Khodorkovsky is our barometer of change: The day he is free, the world will know that new, better times have come to Russia,” Shenderovich said.

In Russia, the price for exploring injustice and corruption can be high, the writers say: The journalist Anna Politkovskaya, the human rights activist Natalya Estemirova and the lawyers Stanislav Markelov and Sergei Magnitsky are becoming accepted among writers as symbols of people who lost their lives in the struggle for truth and justice.

Perhaps out of respect for Anton Chekhov’s traditional idea that the main character of any play has to either leave Russia or die, neither Shenderovich nor any other Russian writers or film makers have so far made Khodorkovsky the hero of a play.

Nevertheless, his fate continues to bring more activists from Russia’s most prominent cultural elite into a tight community. Writer and internationally recognized artist, Yuri Rost, said he went to Khodorkovsky’s trial to look at the man in the glass cage and see “real courage,” Rost said.

Tuschi, the German filmmaker, said he was intrigued by the story of Khodorkovsky’s defiance, the courage of a man who could have chosen political asylum in the United States, but instead returned to Russia, on his private jet, knowing he would go to the gulag.

The German film looks at how money and prison can transform a personality. The movie, however, is not likely to have wide distribution and is even less likely to influence his fate.

When his film was still in production, Tuschi drove to meet with Arvo Pärt, the Estonian composer, to discuss the possibility of using excerpts of Pärt’s symphony “Los Angeles” as the film’s soundtrack. Tuschi said he was “feeling a connection” with another artist driven to dedicate a piece of art, in this case the symphony, to the Russian prisoner.

A similar feeling of connection inspired 45 of Russia’s best writers, theater directors, poets and journalists to write a collective letter asking Amnesty International to recognize Mikhail Khodorkovsky and his business partner Platon Lebedev prisoners of conscience. Boris Akunin, Lyudmila Ulitskaya, Victor Shenderovich and Yuri Rost were among those writers, filmmakers, and scientists who signed the appeal.

In an animated scene of Tuschi’s film, Khodorkovsky swims across a pool full of oil and golden coins. He seems to be sinking. As he approaches the pool’s edge, there are fewer coins and the water begins to clear: Khordokovsky appears to swim again.