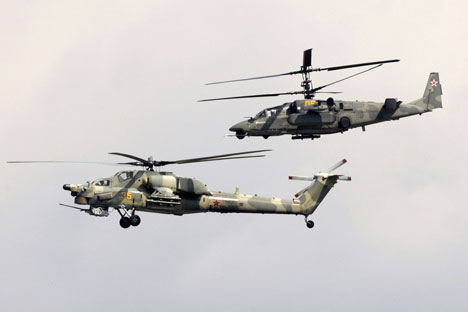 Russian arms exports are expected to stay at record levels of about $10 billion a year until at least 2014 as top customer India continues to beef up its armaments, leading military think tank CAST said.

"The existing portfolio of contracts will be enough to keep Russian arms exports at the current level for another four years or more," CAST said in the report, obtained by Reuters ahead of publication. Rosoboronexport, the country's weapons export monopoly, delivered $8.6 billion in arms last year. Nearly 20 independent firms make up the difference with sales of spare parts and upgrades. Rosoboronexport generally makes up 80 percent of all arms exports in a given year.

India is carefully watching the growing economic and military prowess of regional rival China, the world's second-largest defense spender. New Delhi boosted military spending by more than 10 percent in its 2011-12 budget to more than $36 billion. By comparison, the United States spent $530 billion on core defense spending, while China set defense spending at $78 billion.

Last year, Russia delivered 10 Su-30MKI fighter planes to India as part of a broader contract worth a total of $1.6 billion as well as a shipment of 20 T-90 tanks in a $1.24 billion contract, CAST said.

India and Russia, whose defense ties date back to Soviet times, also concluded an agreement last year for the design and development of an expected 250 to 300 supersonic fighter aircraft over 10 years, reported to be worth up to $35 billion.

Orders from China, which has been a big buyer of Russian arms in the past, is expected to stagnate in part due to the country's own defense industry, which analysts say has come into its own in part by copying aspects of Russian technology.

Uganda became a large importer last year with an order of eight fighter planes worth $350 million. The African nation is nervously watching troubled negotiations between north and south Sudan ahead of the south's formal secession on July 9 as well as violence that it fears could spill over into the region.

South Sudanese politicians walked out of negotiations with the north this month, accusing Khartoum of arming militias in the contested Abyei border region and provoking other fighting. "Given the growing tensions in southern Sudan, new Ugandan arms contracts can be expected any time now," the report said.

Moscow also delivered Bastion anti-ship missiles to Syria despite protests from Israel in 2010, in a deal previously quoted at $300 million. Israel fears the sale of the rockets, capable of hitting ships 300 kilometers off Syria's coast, could end up in the hands of Lebanese guerrilla group Hezbollah.

While New Delhi accounted for 41 percent of arms deliveries, Algeria took 12 percent of exports, and Syria represented 7 percent of deliveries.