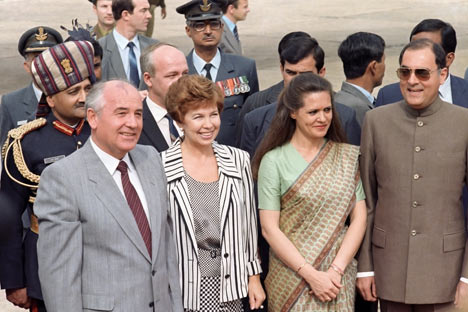 Mikhail Gorbachev and his wife Raisa with Indian Prime Minister Rajiv Gandhi and his wife Sonia during his visit to India. Source: Itar-Tass

The man who brought down the Soviet colossus continues to mean different things to different people in india.

Reviled at home for liquidating that colossus called the Soviet Union and lauded abroad, Mikhail Gorbachev evokes mixed feelings in India, the first Asian country he visited after becoming the general secretary of the Communist party of the Soviet Union in March, 1985. Thousands of people lined the streets, flaunting banners and celebratory decades of the Soviet-Indian friendship when Gorbachev touched down in New Delhi in Nov, 1986.   It was “the kind of reception I haven't had anywhere,” Gorbachev confessed when he met the youngest Indian Prime Minister Rajiv Gandhi in November 1986. Gandhi welcomed the Soviet leader as a “crusader for peace.” The two leaders bonded well and symbolized for the Indian youth – those in senior school and college – idealism and a touch of innocence in a world of realpolitik. Glasnost and perestroika were magic words for many, showing the possibilities of reinventing Communism to absorb the longing for reforms and freedoms. The Soviet leader’s eponymous book “Perestroika” was a bestseller and much sought-after book.

The Delhi Declaration on the Principles of a Nuclear Weapon Free and Non-Violent, signed by the two leaders on 27 November, 1986 reinforced the fading belief that idealism was possible in international politics and discourse. Marx gave way to Mahatma Gandhi as the Soviet leader joined his Indian host in calling for the dismantling nuclear weapons. “Non-violence must become the basis of human co-existence,” said the declaration. “In the nuclear age, mankind must develop a new political thinking and a new concept of the world that provides sound guarantees for the survival of mankind,” it said, prefiguring Rajiv Gandhi’s plan for universal nuclear disarmament in 1988 and the arms cuts talks Gorbachev had initiated with then US President Ronald Reagan. “The most startling inclusion was the reference to non-violence. Here was the general secretary of the Communist Party of the USSR publicly subscribing to the Gandhian gospel of non-violence,” recalled K. Natwar Singh, a former Indian diplomat who was then minister of state for external affairs. In a lecture, Ronen Sen, India’s ambassador to Russia in the tumultuous Yeltsin years, recalled that “the personal chemistry between General Secretary Gorbachev and Prime Minister Rajiv Gandhi was “very good.” Describing the Delhi Declaration as “a landmark global document,” Sen said: “This is not only in the context of the recent focus on complete nuclear disarmament, including by President Barak Obama, but also in the Soviet ideological acceptance, for the first time ever, of the concept of non-violence as propagated and practiced by Mahatma Gandhi.”

In a recent article that coincided with Gorbachev’s 80th birthday, Natwar Singh described the fall of the Soviet Union as “a demographic and political earthquake” whose consequences have yet to be fully played out. “One major fall out was the disappearance of an alternative point of view on global issues,” he said, echoing the views of many Leftist and left-leaning politicians and intellectuals in India.

Like Soviet Communists back home, Indian communists have clearly never been great admirers of Gorbachev. On the contrary, they were vocal in criticizing the Soviet leader when he came to India for his second visit in 1988 and accused him of coddling the West at the cost of the Soviet Union’s relations with developing countries and lamented that India’s importance under the Gorbachev dispensation was diminishing. At a banquet hosted in his honour, the Soviet leader took note of this critique was quick to rebut the speculation that Moscow had cooled toward New Delhi. He said such speculation was “totally groundless.”

Nobel laureate Gorbachev, a recipient of the Indira Gandhi Prize for Peace, Disarmament and Development, therefore, sparks conflicted feelings and assessments among the Indian elite. In a lecture entitled ‘Some Thoughts on the Soviet Collapse,’ he delivered at Pune in 1990, I.K. Gujral, who was India’s External Affairs Minister, captured the sense of anguish and puzzlement among the Indian establishment at the sudden fall of the Soviet Union. “And then, suddenly, that mighty state lay prostrate. It’s creed and doctrine, communism, was in disgrace. Not because it had been defeated in a traditional war by a mightier power, but because its leader, Mikhail Gorbachev, inspired by stirring visions of the future not only of his own homeland but also of the humankind, was determined to transform a seventy-year old rugged dictatorship into social democracy drawing its lifeblood from the free consent of its deeply diverse population,” Gujral, also a former India’s ambassador to Russia, said. “This unique background to the collapse of the communist state in the USSR imparts to the tragedy a nobility that must not escape,” he said memorably in the lecture which was later compiled in one of Gujral’s books “Continuity and Change: India’s Foreign Policy.” This mixture of admiration and sober introspection bordering on anguish, encapsulated in Gujral’s lecture, fittingly encapsulate ambivalent feelings the Gorbachev legacy continue to arouse in India even as New Delhi continues to expand time-tested ties with Moscow under the Medevedev-Putin era. Gorbachev the man, as opposed to Gorbachev the corpse-bearer of Communism, however remains a source of inspiration for millions of Indian idealists who see in the 80-year-old statesman and green warrior a beacon of idealism in a world of murky deal-making.