Star City counts down to relaunch as a tourist destination 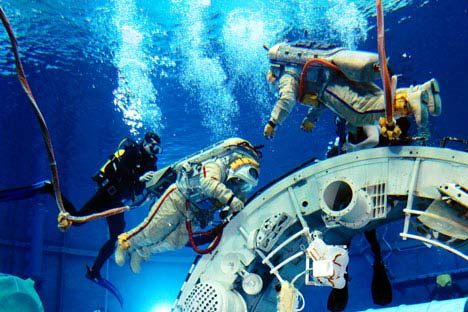 Star quality: a crew trains on a submerged model of the ISS in the giant pool at Star City. Source: RIA Novosti

Still cloaked in secrecy and enjoying legendary status in spacefaring circles, the aging Soviet-era cosmonaut training center at Star City near Moscow is counting on a futuristic makeover amid celebrations of the Gagarin flight.

The sheer density of decorated Heroes living on its territory--around 40 medal bearers among a population of 6,700--attests to the cosmic array of feats performed over the years from Zvezdny Gorodok, or Star City.

Built in the 1960s and still not featured on any map, the cluster of hangars and Soviet apartment blocks hidden among the pines 15 miles northeast of Moscow was the starting point for all of the country’s cosmonauts, as well as many foreign astronauts working on joint missions.

And while it boasts a futuristic array of space training equipment, entering the complex is like travelling backward in time. Formerly designated ‘Closed military townlet No.1,’ Star City has, owing to its neglect, become a curious monument to Soviet architecture.

These days everything – utilities, roads and buildings – is in dire need of repair. “Nothing has been done here for 45 years,” said the city’s mayor, Nikolai Rybkin, estimating that five billion rubles are required for gentrification. Prime Minister Vladimir Putin has now promised to provide the funds, 200 million rubles of which were already disbursed for a spruce up for the approaching festivities.

A former KGB colonel who was elected mayor by popular vote in 2009, Rybkin has ambitious plans for this unique enclave of world history, maintaining strict security while gradually increasing accessibility to the outside world. As investors come forward, he aims to turn Zvezdny into a tourist attraction linked to the capital by a special train, boasting modern hotels, business centers and entertainment venues. And not forgetting a Gagarin School for future cosmonauts.

The designs of the new buildings he wants to replace the abandoned Ministry of Defense structures resemble sci-fi movie sets – nothing of the sort exists anywhere in Russia yet.

“I want to see the whole place abuzz,” Rybkin said, citing Monaco with its luxuries and low crime rate as a model. With use of technical means for surveillance and arms and explosive detection, the veteran of special operations insists he is able to “strengthen the system while relaxing it on the surface.”

The process effectively began in 1994, when the U.S. space agency NASA was allowed to establish a permanent presence at Star City, where two of its astronauts were in training for the first shuttle-Mir Space Station mission.

“Rich tourists such as sheiks and Europeans brought enough cash to pay salaries to all employees of the center,” he said.

Now the Gagarin flight anniversary presents the opportunity to test the possibilities further. Expected guests span from Prince Albert II of Monaco to Didier Marouani from the French pop group Space, and Russian President Dmitry Medvedev may well drop by.

But none of this means a ‘Russian Vegas’ will grow here: Star City remains firmly committed to its original purpose.

After clearing another checkpoint to enter the cosmonaut-training center, recent visitors were ushered into a huge hangar. It contains life-size replica of the Soyuz spacecraft that with the retirement this year of the U.S. shuttle fleet will be the only means of ferrying crews to the International Space Station. Two Russians and an American are at work training in the simulator.

The Soyuz weighs seven tons and consists of two compartments, the lower compartment being the so-called descent module that cosmonauts use to return to Earth. It’s cramped inside, and occupants spend two days hunched shoulder to shoulder in an embryonic position before they reach the space station.

“The Soyuz is very small, like a barrel, but that’s fine,” said Michael Foale, a local NASA representative who has been to space six times, some of them aboard Russian craft. Overall, there are 35 people in training for missions at the center, including three to five foreign astronauts at any given time, Foale added.

Other premises house the centrifuge, the only facility in the world that simulates not only G-force and acceleration but also weightlessness. Powered by an underground plant, the 305-ton mechanism with its 59-foot arm packs the punch of five railroad locomotives as it rotates subjects in a tiny capsule.

Elsewhere, teams train on a mock-up of the modules of the International Space Station that are submerged in a giant 39-feet-deep pool to help simulate weightlessness. Wearing diving suits loaded with weights weighing about 300 pounds, they often shed some real pounds during a four-hour session.

The esprit of the space community is tangible everywhere. Hallway walls are adorned by photos of cosmonauts and astronauts, living and deceased, who underwent training here, including Russians, Germans, Vietnamese, Americans, Chinese and Romanians. A triple “hooray” thunders from one of the rooms as a Russian team holds a birthday celebration, likely raising the traditional cosmonauts’ toast of  “To a soft landing.”

“We’ll let them relax in peace,” says the guide, ushering the group onward.

In one of the squares outside stands a statue of Gagarin, in whose footsteps they all follow. And where, if Rybkin’s plans come to fruition, many more foreign visitors will partly tread too as Star City prises open its doors to the outside world.