Stranded in Moscow – your choice 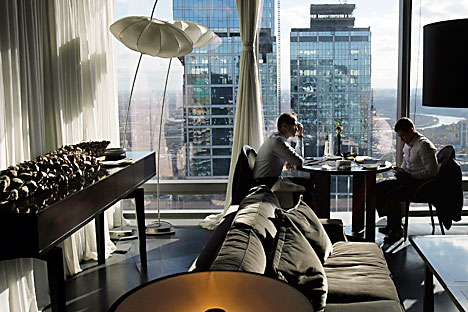 So you're an expat in Moscow...how are you going to approach your stay? Learn about the typical types of Moscow expats.

Did you come to Russia to establish your company’s operations in Russia? Have you been sent to the country of vodka and bears to bring a fresh Western breeze into the corporate culture? Or did your company just simply “dump” you in a country called Russia? Well, congratulations – it seems quite likely you are an expatriate. You might have high potential, with perfect (or at least sufficient) Russian language skills, perfect management experience, you might be the only man or woman, who is willing to take adventure and move to this wild country, or you are just simply the person your boss wants to get rid of. In any case you will fall under the category “Expat in Russia.”

A few examples of typical types of expats:

Anxious about engaging with Russian life, often with bad language skills, locked up in trusted expat-communities, visiting places that are familiar and/or remind him of his home country (as an example: American expats in Starlite Diner). Most of his/her friends are expats or even from the same country. Usually lives downtown or in expat compounds. Avoids the metro and often has a driver.

Approaches his stay in a positive and interested way, at least tries to study the language (often gives up as soon as he or she picked up small talk), tip-toes into the Russian culture (by visiting once or twice “typical Russian” places, like the banya) and is generally trying to get in contact with Russians. This person can be absorbed by the local culture, to avoid cultural conflicts in order to be accepted by his or her environment. If he or she encounters negative feedback, easily can turn into “the frightened one.” In case of positive encounters might stay longer than agreed by his contract and might even chose to move permanently and/or become an “adventurer.”

Feels ok in every culture because he doesn’t take notice of it, ignores it and is simply ethnocentric.

Explores the debts of Russian culture, tries to maintain relations with Expats and locals and tries to link them. Tries to find positive parts to learn from the local culture, but at the same time tries to give something back, teach or improve the local standards. Can be anything from artist to entrepreneur. Often inspiration for other Expats. Often comes back to Russia for regular visits after his official stay.

In most cases your destination as an expat in Russia will be Moscow. Do you want to survive your stay? Here are a few things to know:

I truly hope for you that your employer takes over this part. Insufficient language skills and just simply the size of the city will confuse you in finding a decent (and fairly affordable) place. If you really are left alone with this burden then check expat forums for support.

Tip: Find a roommate. Don’t want to feel like a student? Don’t worry, Here even CFOs, lawyers as well as other “grown-ups” and established business people occasionally share an apartment, as together it is easier to afford a place in the center. Also it’s more fun and prevents you from being a lonely and excluded expat. Check out forums like expat.ru orinternations.org.

Be aware, Russia is different and so are its people. English skills among employees and even management are often questionable. Note the dress code. It is simply lovely, especially for the male Expats to peek under a secretary’s super-short skirt, however quite disturbing if the secretary is over 40 and slightly overweight (yes we do have overweight aging beauties also here in Russia – sorry for killing some dreams here), but still bright and flashy with glitter and too much make-up.

Tip: Go with the flow – at least to a certain extent. Adapt a little—after all, you are a guest here. There is no need to tilt against windmills. There is also no need to forbid your employees to dress in stylish ways (if you are a manager), or to fight the dress code (if you are not management) by being extra grey, boring and simply overlooked. Russia is the wrong place for silent protest.

Enjoy the metro, it is fast and cheap. (Tip: Wear headphones to reduce the metro noise.)

Do not like smelly crowds and violent pushing? Learn to catch a car by stretching out your hand in an about 45 to 50 degree angle to your legs and be prepared to state your location and price, for example: metro stanciya Mayakovskaya, 200 Rubley (metro station Mayakovskaya, 200 rubles). If he nods, you won. If not, offer more or try the next car.

Trouble finding friends? Subscribe to one of the various social network groups on Facebook, or internations.org. There is also the International Women's Club. They have frequent events, club evenings, parties you can go and meet other expats as well as locals. The expat community is huge in Moscow. Another option is to go to a bar and order a bottle of vodka (for example Chebureyky bar, a typical Soviet-style buffet, where all sorts of people stand around little tables eating deep fried snacks and drinking vodka). Once you open the bottle, the friends will come. (Tip: Chebureyky bar at metro Kitai-Gorod)

Visit your home country frequently (don’t forget to sign up for a frequent traveler mileage collection program) or at least leave the country a few times a year. This Russia-detox helps in many cases.