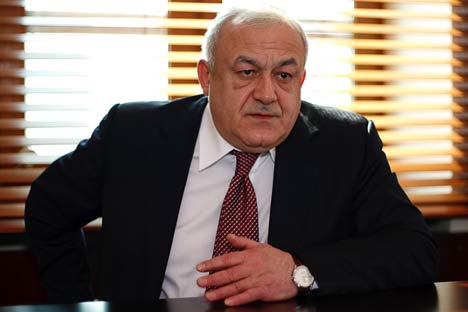 RN spoke to Taymuraz Mamsurov, president of North Ossetia, about Beslan, jobs, and bringing peace to this troubled region.

Why would a family choose to fly to the North Caucasus for a holiday rather than a region with a more stable reputation?

It’s a psychological barrier we have to overcome, and this will take time. We can’t do this through a barrage of advertising – this will only have the opposite effect. What we need is for people to come, have a good time, and recommend it to their friends.

Have the upcoming Winter Games in Sochi affected the republic?

Of course. We supply raw materials and some of our construction workers are there. After the Games are over, we’re going to receive one of the ice arenas to be used in Sochi here in Vladikavkaz. It’s not the Sochi Olympics; it’s the Russian Olympics. A nd we all – from Kamchatka to Kaliningrad – have to do our part to make them great.

Your region has relatively low unemployment (12 per cent). How did you achieve this?

The Caucasus always had excessive labour, even in Soviet times. Back then they would fill one job with three people to combat unemployment; it was economically inefficient, but unemployment was considered a greater problem.

Which sectors could drive the republic’s economy over the coming decades?

Metallurgy and forestry are obvious choices based on our natural resources. They provide the inputs for construction and manufacturing, specifically road-building and furniture-making.

We also must learn to take advantage of our hospitality via the services sector. We’re investing resources and providing basic management training for our youth.

Does North Ossetia still feel the wounds of Beslan?

Do you believe in the success of the programme to develop tourism in the North Caucasus? Will violence decrease?

I’m convinced we’ll have a long-lasting peace during my lifetime, but I wouldn’t connect this directly to developing tourism.

Then what factors will facilitate this long-lasting peace?

The younger generation has proven itself remarkably adept at adjusting to new realities, utilising its talents and maintaining honourable values. We had groups of young people here from Chechnya, Ingushetia and Kabardino-Balkaria, and the positive interaction that goes on between their youth and ours is remarkable. This youth will lead us to a prosperous future.