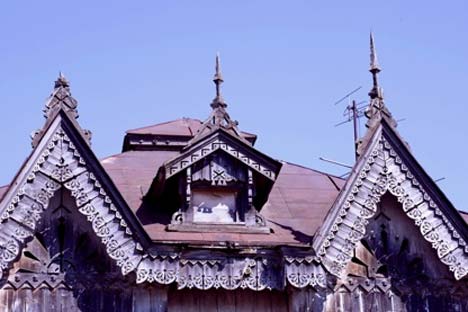 Just to the south of Moscow, the picturesque town of Borovsk makes the most of its setting among the pine groves.

There are towns that turn their backs to a river, and there are those through which a river flows like a glistening ornament, always renewed. Among the latter group no Russian town surpasses Borovsk. The Protva River, a tributary of the Oka, is not large or deep, but its ancient, twisting path has created for Borovsk a varied landscape of lyrical beauty.

Borovsk (population around 11,000) is located 100 kilometers to the south of Moscow not far from the Kaluga highway. Its name comes from a word for grove or pine forest ("bor "), and even today much of the town is enveloped by stands of majestic pines. In times of danger the dense forest gave refuge, while the river provided transportation. The settlement was probably formed during the 13th century on an elevation above the right bank of the river. Traces of earthen ramparts remain on the north side of the compact town center. As the river turns to the east, a stunning view opens from the high bluff near the market. From here one can see a small plain that rises in the distance to a cluster of church towers and cupolas. This is the village of Roshcha with its venerable Nativity Monastery, founded in 1444 by the monk Pafnutii.  But first, the town itself.

The center of Borovsk is occupied by a market square with arcaded shop rows flanked by a park-like setting with the usual monument to Vladimir Lenin. The dominant feature of the town center is the Annunciation Cathedral, whose tall 19th-century bell tower is visible to the east of the market square. Its main structure dates from the early 18th century, with additions in the early 19th. Even during the Soviet period, it remained open for worship, and the interior is thus well preserved.

In addition to the Annunciation Cathedral, Borovsk has a number of other churches, most of them restored. One example is the Church of Saints Boris and Gleb, prominently located on the road into town from the main highway. Built in 1704, with an early 19th-century bell tower, this church is a festive display of golden domes and stuccoed walls recently painted in a bright pink-orange color.

Much of the charm of Borovsk is due to the preservation of its 19th century houses, some of which display the elaborate wooden decoration that is such a distinctive part of traditional Russian art. This living heritage is visible everywhere in the central part of town. From the market place, it is a short walk to streets lined with houses built for local merchants. The task of preservation demands constant effort, and some of these homes have yet to be restored. The center of Borovsk also has a monument and museum dedicated to the great thinker Konstantin Tsiolkovsky (1857-1935), a pioneer in the development of rocketry and the exploration of space. Tsiolkovsky lived and taught in Borovsk during the 1880s.

The crown jewel of Borovsk is the Pafnutiyev-Nativity Monastery, located some three kilometers to the east of the town center. Its founder, the monk Pafnutii (1395-1477; canonized in 1547), was of local Tatar origins. The monk’s dedication to the arduous monastic life of that period was guided by the example of St. Sergius of Radonezh, the primary force in the development of monasticism in medieval Muscovy. In addition to their religious functions, these walled monasteries also played an important role in spreading the cultural and political influence of Moscow. The monastery cathedral, dedicated to the Nativity of the Virgin, is itself a work of art, painted on the interior with rich frescoes.

The monastery’s stout fortress walls, completed in the 17th century, suggest a turbulent history, and indeed the monastery has seen many turbulent events, including a fierce battle with Napoleon’s troops during their retreat from Moscow in October 1812, and occupation by German troops for several weeks at the end of 1941. Perhaps the most tragic events involved a schism in the Russian Orthodox Church in the late 17th century. The monastery served as a prison for some of the most prominent dissenters (known as Old Believers), including the noblewoman Feodosiya Morozova. Incarcerated in an underground cell, she starved to death in December 1675. Her memory is widely venerated, and a chapel was recently erected over her grave in the center of Borovsk.

The Old Belief is still active in the Borovsk area. After 1905 Old Believers were allowed to build large churches in urban areas, and Borovsk has some excellent examples, including one functioning church and the enormous Cathedral of the Intercession–not yet restored, but clearly visible on the right side of the road into town.

Remarkably picturesque, contemporary Borovsk has benefited from the expanding prosperity of Kaluga Province. Although it has no rail link, it is easily accessible by road and is well worth a day visit. On the outskirts of town is the “Ethnomir” park, whose outdoor exhibits are devoted to some of Russia’s ethnic cultures.