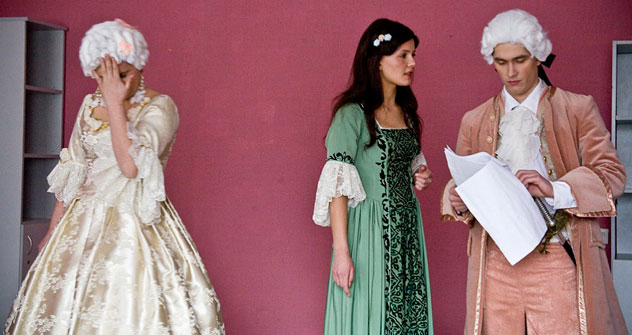 The newly launched project “My part in the movie” offers a chance for everyone to pay and play.

They are absolute strangers to the filmmaking industry. But they did not come empty-handed: They showed up with an amount ranging from a few hundred to several thousand dollars, depending on the part. The project “My part in the movie” offers an opportunity for everyone to act in a popular film.

On its website, Rolvkino.ru, the project is described this way: "We are opening the way for future stars of film and tv.

We give everyone the chance to be on air. We don't have castings, we don't select actors. You can choose and buy your favorite part! We show you and you show your talent to Russia."

For a price, ordinary people can chose a role from a range of the most popular Soviet films, including “The Twelve Chairs,” “D'Artagnan and the Three Musketeers," "Chapayev" and even "Lenin in 1918." The part of Lenin costs $2,000, but there has been no shortage of requests.

The project involves shooting separate scenes from the films, not whole remakes. “When you are at a table or in the company of friends, you, too, quote not whole films or books but just the most popular phrases and dialogues,” said the

The first scene to be shot is from Leonid Gaidai’s “The Twelve Chairs." It is the scene when Ostap Bender comes to Ellochka to exchange a silver tea strainer for a chair.

Before the action begins, the actors watch the relevant scene on a laptop. In this case, Ellochka is Masha, a tall 19-year-old hydrology student.

“I have never considered studying to be an actress, but I would like to play a small part. I want to know how films are made and how actors feel during the shooting. Today is my birthday, and my father paid for this role as a gift,” Masha said.

The first rehearsal was more like a variety show than a real film shoot, but later the situation improved.

“People not professionally involved in filmmaking think it is all easy: you come, act and go,” said director Olga Darfi. “As soon as they encounter any problems they become bored quickly—especially since they paid for their parts. They think everyone owes them because they paid. And here, they have to work.”

Not all the participants felt entitled, however.

A woman named Irina, from the city of Belgorod, played Clarice in a scene from the 1977 TV movie “Truffaldino from Bergamo.” With her acting partner Andrei, she rehearsed the scene for several hours without stopping. Although Irina has two bachelor’s degrees—in philosophy and philology—she is now a housewife with two children.

“I have loved the theater since I was a child. As a university student, I acted in a student theatre. I had a dream of trying to be in movies, but this did not happen. When I saw this ad, I realized that my dream can come true,” she said.

At this point, it is not quite clear how the project will develop, but maybe for some amateur actors it will lead to something more. The project is shown on the website Rolvkino.ru and also will air April 4 on the Russian Illusion TV channel.