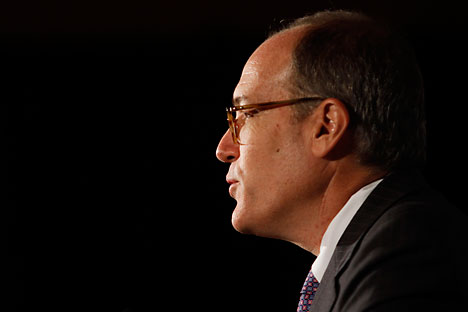 What does the next phase of U.S.-Russia relations hold? Hopefully a friendlier climate for business investors.

U.S. Vice President Joe Biden’s recent visit to Russia marked the informal start of the "commercial reset" that Washington would like to pursue as a follow-up to the reset in political relations, but will anything actually come from it? Edward Verona, the president and CEO of the U.S.-Russia Business Council, accompanied Biden on his trip. Alexander Gasyuk, Rossiyskaya Gazeta’s Washington, D.C. correspondent, spoke to Verona on behalf of Russia Beyond the Headlines.

Russia Beyond the Headlines: What are the main achievements of Vice President Biden’s visit to Russia from the standpoint of American business community?

Edward Verona: Let me start by saying that Mr. Biden made it very clear that this administration’s policy is to do everything possible to bring Russia into the WTO. We have a strong desire to have Russia in the WTO. And in Moscow, Biden made an official statement that he will be leading the effort in the Congress to get the Jackson-Vanik amendment lifted. He will personally be engaged with the discussion on Capitol Hill, and this makes sense because he is a Senate veteran of many years and used to be a chairman of the Senate Foreign Relations Committee. For the American business community, this was the most important message.

The vice president spoke out on the very important issues that the business community doesn’t like to say itself—the need for Russia to do more to curb corruption and to lower the administrative barriers for investments.

RBTH: The U.S. administration made it quite clear that it wants to pursue a commercial reset in relations with Russia. In your opinion does this kind of reset have a chance to be implemented?

E.V.: A very big part of that is the effort to get Russia into the WTO. Also, lifting Jackson-Vanik is something that has been promised by three consecutive American administrations. I hope that this one will be able to deliver on that promise.

My belief is that when Russia gets into the WTO, it will become a much more attractive place for companies to invest. And when Russia becomes a member of the WTO, I would expect to see some sort of increase in foreign direct investment; I think it will increase significantly over the medium-to-long term.

RBTHL Any guess of what might be the most lucrative fields for foreign investment in Russia after it gets into the WTO? Oil and gas?

E.V.: Well, oil and gas don’t really have much to do with WTO. Let’s take two examples: the pharmaceutical sector and semi-conductors. They are usually produced in plants oriented to supplying regional or global markets and not just individual countries. Depending on the results of Russia-WTO negotiations in addressing issues of pharmaceutical sector rights and electronic property rights and also localization requirements, I would expect to see an increase of interest of such companies in Russia.

Any reset in economic and commercial fields certainly has a lot to do with visa procedures, and this was discussed during Biden’s visit to Moscow. Although there may be some sort of resistance to this idea, everything that moves us in the direction of liberalizing the visa regime is a good thing.

RBTH: As far as I understand, the commercial reset is a two-way street. It’s not just about creating a friendly environment for U.S. companies in Russia, but also vice versa. Was this question discussed during Biden’s visit to Russia?

E.V.: It was not, although I know at least one company that was keen to raise it at some point. There are Russian companies in the States who have concerns. I won’t mention the particular companies, but I’ll mention the industry—steel. There is a concern on the part of Russian investors in the American steel sector that special requirements for the procurement of defense equipment, which needs a lot of steel, may be introduced. There are efforts to introduce legislation in Congress that will require defense manufacturers to use only U.S.-made steel, which is actually not quite in line with free trade principles, and that is a problem for some Russian companies.

Also, some Russian oil companies have plans to start investing in U.S. shale gas. Would that require review by the Committee for Foreign Investment in the US (CIFIUS), which is managed by the U.S. Department of Finance? It might, but up to now there has been no CIFIUS denial to Russian companies. I would hope that if such possible investments become a subject of the CIFUS review, they will be judged on their merits and with a bias toward approving as opposed to denying.

So, Russian companies here have their issues, and I’d be delighted to see them working through the channels of the U.S.-Russian bilateral presidential commission to make sure they get fair treatment.

RBTH: What is your opinion on the chances of lifting the Jackson-Vanik legislation, which prevents Russia from getting most favored nation trade status?

E.V.: It really depends on how much effort is put into this. Many Republicans in Congress today believe that Jackson-Vanik doesn’t serve any purpose except to irritate the U.S.-Russia relationship. The conditions that led to its adoption no longer apply.

I believe that the White House could play a crucial role in lifting this amendment. But it is worth remembering that there has to be a vote in a Congress that is not controlled by Democratic party anymore.

What people need to understand is that Jackson-Vanik doesn’t provide any leverage in any negotiations with Russia. The only thing it can do is to prevent American companies for getting the benefit of Russia’s accession to the WTO. If this agreement is concluded and we still have Jackson-Vanik, we have to issue a notification to the WTO that we can’t extend permanent normal trade relations between U.S. and Russia because we have this law on our books. Consequently, Russia would have no obligation to extend most favored nation status to the U.S and we will be locked out of all the benefits that are the results of tough negotiations over the last 17 years. It doesn’t make sense.

The matter of the fact is that repealing this amendment with respect to Russia is seen by many as some sort of referendum on Russia, its foreign policy, its domestic policy, human rights issues, democracy and all that sort of things. But what people must understand is that it will not stop Russia from getting into the WTO.

RBTH: In your opinion, what might be the average investment that could be achieved in the foreseeable future due to the commercial reset?

E.V.: Total Russian direct investment in the U.S. since 2003 is about $8 billion. This is quite a bit, especially given the fact that Russian companies have not been very strong in investing outside Russia and the CIS. Actually, outside the CIS, the United States is the largest destination for Russian foreign direct investment, mostly because of the investment with regard to the steel industry. I would say that this is a significant amount of investment and a very interesting and encouraging trend.

If economic growth resumes, if demand for steel products increases, if Russian companies start investing heavily in the U.S. oil and gas sector, I could see a figure of about $1 billion per year of foreign direct investment to the American economy from Russia.

In other direction the numbers differ, but even not counting the most recent deal—which is PepsiCo’s acquisition of Russia’s Wimm-Bill-Dann—cumulative U.S. foreign direct investment last year in Russia is something close to $20 billion. If we take a comparable statistic, this is relatively small, because in 2008, U.S. direct investment in Russia was $17 billion; India, $18 billion; Brazil, $45.5 billion; and China, $100 billion.

When it comes to forecasting the overall possible amount of U.S. investment in Russia, it is quite optimistic, even if we consider only a few sectors of the economy. For instance, Chevron and Exxon now have offshore exploration agreements with Rosneft, and those require a huge amount of front capital if they go forward. So Russia’s oil and gas sector has a potential to substantially increase its American direct investment.

PepsiCo’s investment in Russia is close to $6 billion, including the “Wimm-Bill-Dann” deal, and that is one company in just one sector.

We also have a deal signed by Ford and Russia’s Sollers, which are going to have a joint venture with the intent of meeting the new government localization requirements. That will certainly require significant investment.

All of this gives an idea of the overall magnitude of American investments in Russia, and I personally think that American companies are only beginning to enjoy the benefits of the Russian market.