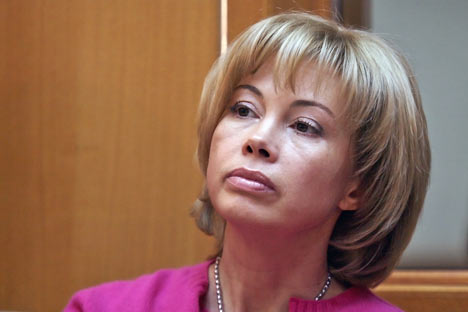 'Novaya Gazeta' spoke to Irina Virganskaya-Gorbacheva, daughter of the first president of the USSR Mikhail Gorbachev, on the eve of his 80th birthday. Source: Itar-Tass

Attitudes toward Gorbachev in Russia vary. One person likes him, another person hates him. We won’t count how many people feel one way or the other. It’s the quality not the quantity that matters. Every person has their own truth. The truth does not belong only to heaven or to history. It may belong to one person.

“My parents were always very reserved in front of me; there were no outward displays of affection. But there was this: mutual understanding. Papa would come home from work and we would listen to him talk about all the collective-farm sheep, about what burned down, where he went, who he talked to… Mama would come home from the institute and start talking about this student, that student… And I would talk about myself. As a family, we were very close, although in Papa’s and Mama’s work lives, there were also things that weren’t discussed.

“I remember the constant hush at home. We were all buried in our books. I began to read when I was four. No one especially taught me. I asked my parents about some of the letters and they explained… We had an enormous library, and from the age of four I read all the time, devouring vast numbers of books.

“As for conditions day-to-day, I remember life in our communal apartment. I don’t remember our neighbors’ names, but I remember their faces and the many doors: besides us, there were eight other families. I remember the kitchen with its gas stoves, I remember the vituperation, and some good things too. I was three or four.

“My parents did not enroll me, on principle, in a special school for the children of Party officials. I went to a perfectly ordinary school.

“After graduating from school I went to a medical institute. The choice was mine. But one dictated by circumstances. I badly wanted to go to Moscow, to study philosophy at Moscow University. But my parents… They didn’t come right out and say we forbid you… But they did say many times: ‘How can you leave us when you’re our only child?’ In Stavropol, there wasn’t much to choose from. But a doctor’s profession is a good one, and at heart I was prepared for it.

“I had just begun my fourth year at the institute when Mikhail Sergeyevich was transferred to Moscow. Mama loved Moscow. She remembered being a student there and all that.

“When we became a ‘Kremlin family’ absolutely nothing in our internal relations changed.”

Here Irina falls silent and musingly, slowly, carefully choosing her words, says: “But our country is such that… You see, if I say that now we all came home and told each other everything the way we had before, then people will start saying that the decisions of the Politburo were taken in the family of Raisa Maksimovna or, God forbid, drag me into it… But that’s a joke! Political decisions were not discussed in our family. We discussed emotions, reactions, feelings. On the order of: I’m tired, I’m not tired, this worries me, that troubles me… A person always needs to talk to someone.

“But everything can be taken out of context and twisted. The way they did the myth about Raisa Maksimovna, a myth that is still alive and still circulating. She made the decisions! She ran things! She was in charge! But Mama was not like that.

“Raisa Maksimovna’s grandfather was an honest, hard-working peasant. He was arrested as an ‘enemy of the people’. Then her grandmother was driven out by her neighbors. With the whole village looking on, she died of hunger and sorrow, and no one helped her.

“Her grandfather was shot on 20 August 1937. Exactly fifty-four years later, on 20 August 1991, came the coup. Raisa Maksimovna was amazed and frightened at the coincidence of these dates. That night, in Foros, she simply could not fall asleep. When her doctor suggested a sleeping pill, she refused: ‘I’m afraid I’ll fall asleep, and then wake up in a completely different place, far from here, and everyone will have been killed, including the girls.’

“Mikhail Sergeyevich’s grandfather was also repressed. From the reminiscences of Raisa Maksimovna it is clear that the Gorbachevs came of age during Khrushchev’s ‘thaw’ and belonged to the generation of the ‘children of the 20th Congress’, to the ‘sixties generation’, the ones who struggled against the legacy of Stalinism. For them Stalin was a tyrant. Period! No commas and no ‘but’s about it. There are times when even the grammar protests. And not only the grammar.

“After Papa resigned, the telephones in our house stopped ringing. They didn’t ring and didn’t ring… Some people cut us off. Including close friends. But you see how it works? New people appear, new friends. And the ones who remain are the ones who would never cut you off. It’s always like that: some cut you off, others remain… But no one ever cuts you off completely.

“Even so, my father’s resignation was a very difficult time. Especially in the early ‘90s. All those trials, all the persecution, the eviction of the Foundation. Mama was sick… After Foros, she had certain problems… Not only did she lose the use of one hand, she also went blind…”

“May I write that,” I ask. Irina sighs and says: “Yes. Now you can write anything. In any case there were lots of problems, including financial ones. Mikhail Sergeyevich’s pension, I don’t remember exactly, was the ruble equivalent of either one dollar or two… And what was the overall situation in Russia? Everything was bad, and it was all Gorbachev’s fault. But! The degree of freedom that I felt after Papa’s resignation was incomparable! Freedom from the constant pressure… Be there, do this, do that… I didn’t have any official duties, but the terrible moral responsibility for the fact that somewhere something had exploded, something had happened… That weighs on you, and weighs, and weighs… And then freedom… No matter what they do to you, no matter what they write, no matter how they try to destroy you, you are free!”

“Mama’s death was a black depression. I still have bizarre dreams. Frightening, incredible dreams… I dream about Mama and the horror of those dreams is that in them Mama is alive, as if nothing had happened to her, and she starts talking to me about what is going on today…”

Until Raisa Maksimovna’s death Irina lived in Moscow, in an apartment. She was divorced and raising her daughters alone. The older daughter had to be driven to one school, the younger one to a different school. And then she had to get to her own work. In short, if she had lived outside the city with her parents, she would have lost lots of time.

After graduating from the institute, Irina defended her Ph.D. thesis and worked at the Cardiology Center. In 1994 Mikhail Sergeyevich said to his daughter: Let’s think about what you can do for the Foundation. She was thirty-seven. But she made up her mind: she quit her job and enrolled in business school. Only after graduating did she begin working for the Gorbachev Foundation.

“In 1999, Mama was in Münster, in a clinic. Right up until the end we were hoping that she would recover. Even if it was a matter of a long recuperation, rehabilitation, we believed that she would get better. It was then that Mikhail Sergeyevich decided to appoint me vice-president of the Foundation with the authority of the president. He assumed that he would be constantly at Mama’s side and probably for a long time… Meanwhile, the Foundation was an organization with employees, its work could not be interrupted. So I became vice-president.”

About the family without Raisa Maksimovna

When Raisa Maksimovna died, Irina packed up her apartment in one day, took her daughters and moved out to the dacha to be with Mikhail Sergeyevich.

“For the first two years after Mama’s death Papa and I were always together. Always. We worked together, went on business trips together, were at home together…

“I sold my apartment in Moscow, bought a small house in Zhukovko. What was the benefit? Relative freedom of movement for my girls, because I am an extremely loyal parent.  And Papa was only five minutes away. That is essentially our living situation today.”

After her divorce, Irina promised herself: no more men and no more marriages. But then she met Andrei Trukhachev. And that too was very complicated. They each had their own problems, their own lives. A lot had to be decided, understood, and made sense of, together and apart. They even separated for a year so as to understand everything. They understood and in 2006 they married. And have been happy ever since.

About her father’s work day

“Papa’s work day varies. Some days are fairly calm. Some days are: lectures in American universities and in the space of twelve days we have ten flights to different cities around the country.

“Mikhail Sergeyevich has to give lectures because that is our main source of income. The audiences range from 500 people to 12,000. These public lectures are an enormous stress, physical and intellectual. Here in Russia, Papa also gives lectures at Moscow State University or at Russian State University for the Humanities. But mostly for free.”

“It was Raisa Gorbacheva who, as First Lady, revitalized charity in the Soviet Union. Before her, “charity” was a bad word in Russia.

“The first project was the Children’s Leukemia Hematology Project at the National Children’s Clinical Hospital No. 20. Raisa Maksimovna’s first contribution was her advance for her book I Hope. All of Gorbachev’s Nobel Prize money (almost $1 million) was divided between several hospitals, including the National Children’s Hospital. When she was no longer First Lady, Raisa Maksimovna continued to work tirelessly for charity.

“In the spring of 1999 she helped two small children sick with leukemia. They lived in a village deep in the countryside; their mothers had appealed to her through a newspaper.

“She saved the children, only to die four months later of the same disease.

“To date the Gorbachev Foundation has contributed $11 million to charity. For a single purpose: to help children sick with leukemia.”

At the end of our conversation, I asked Ira Gorbachev about what she admired most in her father.

“We were abroad in I can’t remember what country, we were being driven somewhere, he was looking out the window at the people walking along the street, black people, people with narrow eyes, all sorts, and he said: ‘Daughter, just look how much God created… That means it’s all needed. And one should love everyone…’”

“He knows people. He knows their weaknesses, oddities, shortcomings, which are very negative. And even so he loves them. All kinds!

“I admire that about my father more than anything else: his absolute, unparalleled decency and absolute love of mankind.”