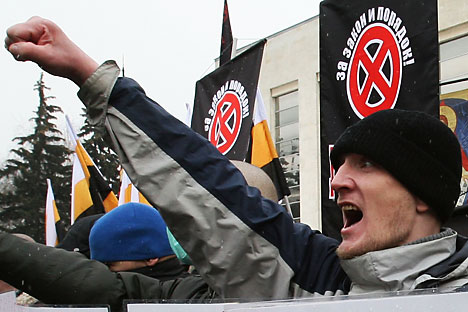 When Russian law makes it possible to accuse nearly anyone of inciting hatred, how can true extremists be uncovered?

Within the Russian Penal Code there is the curious Article 282. Its aim is to combat the incitement of hatred or enmity “on the grounds of sex, race, nationality, language, background, religious inclinations, or for being part of a certain social group.” The punishment is severe: even if it does not result in violence, the penalty for the “incitement of enmity” can be up to two years’ imprisonment. You would have thought that this would put an end to extremism in Russia.

But it turns out that this just raises a lot of complicated issues. How do you define “the incitement of enmity”? Is shouting, or writing on walls an incitement of enmity? And what exactly is “enmity”? And the most difficult thing to explain is what can be classed as a “social group”?

When Article 282 first began to be implemented, a number of things became apparent. It turns out that a “social group” can, for example, refer to the police. And hurling abuse at the police could be seen as an incitement of hatred towards a social group; in this case “the police.” Members of the Russian Parliament are another social group, and so Yaroslav Nemchaninov, the Financial Commissioner of the KPRF (Communist Party of the Russian Federation), can, according to Article 282, be accused of inciting hatred towards another social group, “members of the State Duma, outside the KPRF faction.”

According to the SOVA Center for Information and Analysis, in September 2010, on the request of a candidate United Russia, Sergei Bashtyryov was denied the right to register as a candidate for the City Duma on the grounds that in his campaign against private schools, he had “incited social enmity” between social groups such as the “pupils’ parents” and the “school staff”, as well as “young people” and “members of the United Russia party.

So, this is how the tools for fighting extremism have suddenly turned into a stick with which to beat political rivals and ordinary people who are in some way disagreeable. A political leaflet posted on the internet, or even a literary text, could be construed as “the incitement of enmity” against a certain “social group.” It is up to experts to define the grounds for calling an action “hate-inducing” and decide whether a case falls under Article 282. At the same time – and the experts from the Ministry of Justice will be the first to admit this – a consistent objective method for reaching such a verdict does not exist. The same case can either be judged to be an incitement of enmity or it can be deemed inoffensive, depending on which expert is consulted.

Personal experience has convinced me of this. I had the chance to talk to experts from the SOVA Center. I asked them about the “Forbidden Art” exhibition, which mockingly parodies symbols of the Orthodox Church. From where these experts are standing, there was nothing offensive or hate-inducing about this exhibition. I have no strong religious views myself, but all my Orthodox friends – of which there are quite a few – were deeply offended and outraged at the show. However, if the people dealing with the case had been these experts, Orthodox feelings would not have been of any significance.

And so there is nothing even resembling consistency in the way “incitement,” “hatred” and “social group” are classified under the law. Depending on a subjective opinion, a case could simply be dismissed, or it could result in criminal prosecution and even a spell behind bars. In other words, a law which purports to fight extremism has ended up being something more dangerous for the people of Russia to contend with – legalized extremism.

And incidentally, there could be a “social group” out there, who would consider this article of mine to be an “incitement of enmity.”